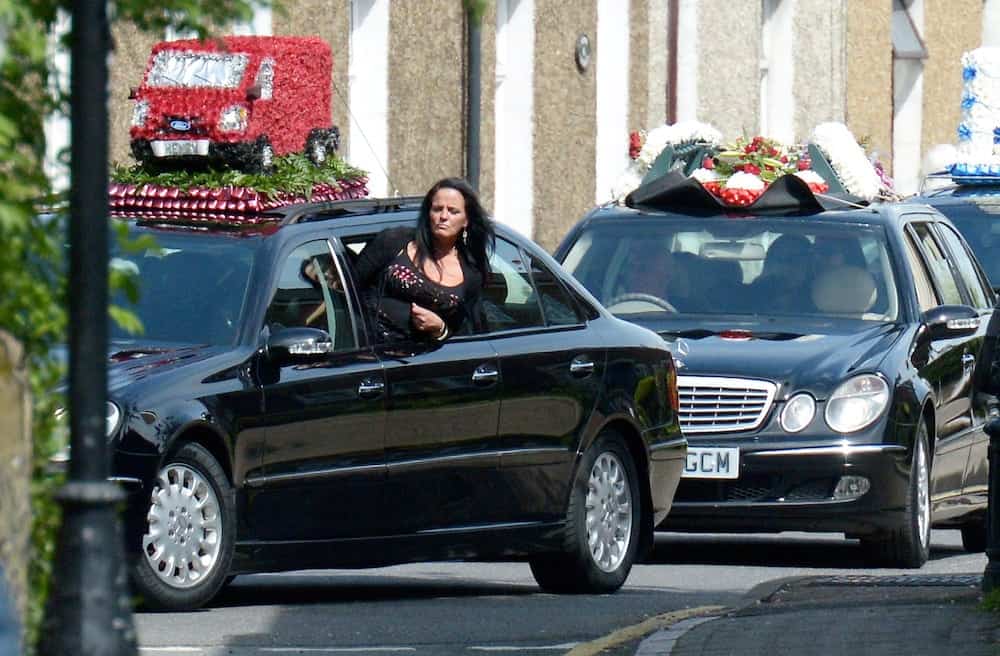 The body of burglar Henry Vincent laid in an open casket for three days so family and friends could pay their respects, a mourner has revealed.

The criminal, 37, was kept beneath a DIY gazebo of green and blue tarpaulin outside his mum’s home since Tuesday so mourners could pay their respects.

He was stabbed to death with his own screwdriver by hero pensioner Richard Osborne-Brooks on April 3.

In a £100,000 funeral two pall bearers led a silver hearse followed by eight black Mercedes with flowers on top including a flower arrangements of an open topped sports car, a van, caravan and a boxing ring.

Hour before the cortege left dozens of close family and friends gathered at his mother’s home in Swanley, Kent, before following the hearse to the church.

The cortege travelled to St Mary’s church for a short 30 minute service before the burglar is buried in the St Mary Cray cemetery, near his grandmother’s home.

Over a dozen vans and beaten up cars followed the limousines for the five mile journey to St Mary’s church.

As they left two PCSOs guarded the entrance to the road where his mum lives in an unmarked police car and others manned the planned route to the church.

Following the burial family and friends will attend a wake at Vincent’s mum’s home and plan to gather around a large bonfire in her back garden and share stories of the prolific burglar.

Scotland Yard have confirmed the cortege will not pass Mr Osborne-Brooks’ home in Hither Green, but have stepped up patrols in the area for reassurance.

A mourner, who refused to give her name, said: “His body has been kept in an open casket for three days outside his mum’s house so people can see him.

“His mum is devastated, she has not left the house at all for days.

“After the funeral we’re coming back to the mum’s house for the wake and there will be a massive bonfire.

“People will the sit around and say nice things about him.

“I know he’s done a bad thing, but he’s dead and it’s only right for the family to pay their respects.”

A Scotland Yard spokesperson said: “The Metropolitan Police has been informed by the organisers of plans for the funeral of Henry Vincent due to take place on Thursday, 3 May.

“We have been told that a large number of people may attend, and an appropriate policing plan has been put in place in consultation with Kent Police and the relevant local authorities.

“It is not for the Metropolitan Police to disclose funeral arrangements – when and where the funeral is being held, and the route of the funeral procession.

“It is not unusual for large funeral processions to cause traffic disruption. Any impact will be managed by traffic officers, and borough officers will also be deployed at key locations. No road closures have been requested.

“However, to provide community reassurance, there will be high-visibility patrols in the Hither Green and South Park Crescent area on the day of the funeral.”