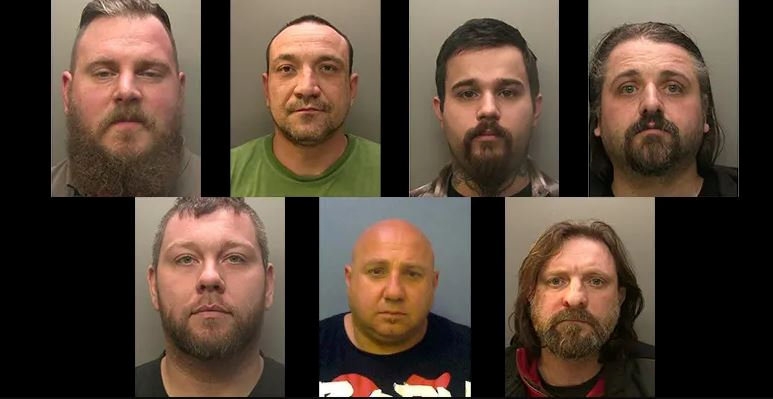 Hells Angels bikers have been convicted of brutally stabbing and battering members of a rival biker gang – that let one man disembowelled.

Seven linked with the notoriously violent Hells Angels and its support motorcycle club Red Devils were found guilty of a string of assault and weapons offences after a trial.

It is thought the attack may have part of an initiation ritual after the attackers were found to be members or prospective members of the clubs.

A court heard CCTV footage showed a gang of 13 donning balaclavas and dark clothing walking towards an outbuilding where their rivals were holding a weekly meeting just before 7.30pm on November 7 2018.

Police were called to the Forman Club and Institute in Blindley Heath, Surrey, minutes later.

They found one man stabbed through his right arm, another with lacerations to his stomach which required bowel surgery and 29 stitches.

Others had bruising and stab wounds on their heads, legs and buttocks, Kingston Crown Court was told.

Przemyslaw Korkus, 41, the first of the seven defendants was arrested in his home town of Slough, Berks., within 24 hours after witnesses gave a description of his vehicle.

The others were eventually identified with Automatic Number Plate Recognition, CCTV footage and mobile phone data.

The seven defendants, aged 28 to 44, and from areas in Berkshire, north and west London, and Haywards Heath in West Sussex, were jointly charged with six counts of causing grievous bodily harm with intent, one of violent disorder, assault occasioning actual bodily harm, possession of a weapon and possession of a blade.

Detective Chief Inspector Chris Friday, who led the investigation said: “This was a planned, unprovoked attack and these seven men knew what they were getting into when they met up that evening.

“Whilst they may try to justify their brutal actions as part of a feud with the Viking motorcycle club, and the prospect of an enhanced reputation amongst their so-called ‘brothers’, there is no excuse for this sort of gratuitous criminal violence in the UK.

“I hope these convictions serve as a warning to anyone who believes their loyalties to any group or gang justifies criminality or violence that we will do everything we can to disrupt and detect their activities.

“I am extremely proud of the professionalism and dedication of the team that has bought this case to court. It has been a painstaking inquiry, bringing together many bits of disparate information and piecing them together to create the case that convinced this jury.

“I also want to pay tribute to the witnesses who bravely stepped forward to share information, who gave evidence in court, and who have been instrumental in getting this result.”

Six were found guilty of all counts after an eight week trial.

The last defendant was found guilty of all counts except possession of a weapon or blade.

A spokesman for Surrey Police said: “Just before 7.30pm, 13 figures dressed in balaclavas and dark clothing were seen on CCTV walking along the A22 towards the Forman institute.

“Moments later they entered the outbuilding and attacked the people inside with various weapons.

“One man had been stabbed through his right arm, another had lacerations to his stomach which required bowel surgery and 29 staples, while others had bruising and stab wounds on their heads, legs and buttocks.”

The men will be sentenced at a date to be confirmed in October.