Robert Spray’s sister also claimed that there were ‘inaccuracies’ in the Bulgarian authorities’ reports. 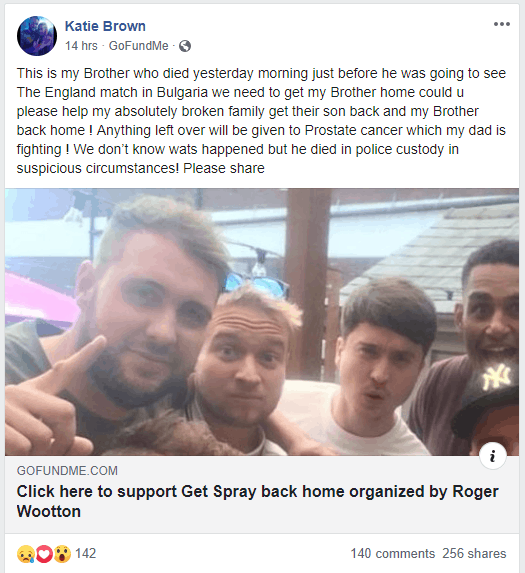 The family of a football fan who died while following England in Bulgaria claim they have received no answers about how he died.

His sister, Katie Brown, claimed there were “inaccuracies” in Bulgarian authorities’ reports, which alleged her brother was acting aggressively.

Bulgaria’s interior ministry said the 32-year-old was found in a “helpless condition” when he was discovered in the city centre on Monday morning.

It said he was taken to hospital but died there. Police are working to find out exactly what happened.

The circumstances of his death are so far unclear.

His sister said the family had received “no support” from the Foreign Office and had been liaising with Bulgarian authorities through Staffordshire Police.

Officers told them Mr Spray died while being transported from a hospital to a police station.

“They’re not helping us at all. The (Bulgarian) police aren’t talking to our police, so Interpol are getting involved,” said Ms Brown.

“There’s been no ‘are you OK?’. We want to go out and see what’s happened but we need someone to help us because we don’t know anything about Bulgaria.”

She told the PA news agency: “He was the politest person you’ve ever met, a gentle giant. He was 6ft 3in. He always said he was a lover not a fighter.

“He was a massive West Bromwich Albion fan. He was very loved, you can see that from the fundraising page.”

More than £11,000 has been raised on GoFundMe by friends and fellow supporters to repatriate Mr Spray’s body from Bulgaria.

Ms Brown said more than 300 people attended a gathering at the Winding Wheel pub in Heath Hayes on Tuesday night in honour of her brother.

The Foreign Office said: “We are supporting the family of a British man who died following an incident in Sofia, and our staff are in contact with the UK and Bulgarian authorities.”