It comes as a British man, 32, died in Sofia ahead of Euro match with Bulgaria. 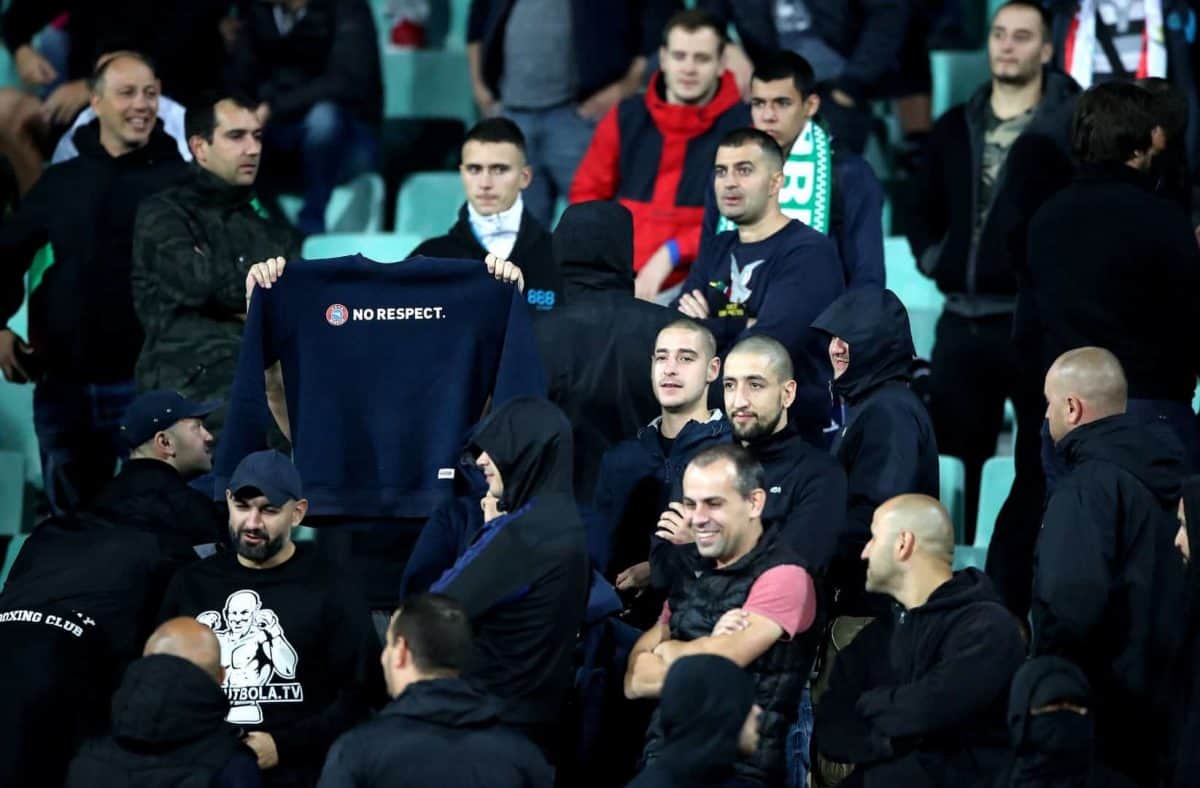 UEFA has been urged to investigate the racist chanting during England’s Euro 2020 qualifier against Bulgaria as “a matter of urgency”.

The match in Sofia was marred by abuse directed at England’s black players during the 6-0 win for Gareth Southgate’s men, and the FA called on UEFA to take swift action as soon as the game ended.

“We can confirm that @England players were subjected to abhorrent racist chanting while playing in the #EURO2020 qualifier against Bulgaria,” an FA statement read.

“This is unacceptable at any level of the game and our immediate focus is supporting the players and staff involved.

“As we are sadly aware, this is not the first time our players have been subjected to this level of abuse and there is no place for this kind of behaviour in society, let alone in football. We will be asking @UEFA to investigate as a matter of urgency.”

It is understood UEFA will await the reports of the referee and other observers inside the stadium before making any decisions on any sanctions that should follow from the night.

England skipper Harry Kane spoke to Croatian referee Ivan Bebek and the first step of the UEFA anti-racism protocol – a stadium announcement to call on the abuse to stop – was enacted in the 28th minute.

Further abuse was reported to the match officials towards the end of the first half, with the referee halting play. However, it is understood this suspension of play did not constitute the second part of the UEFA protocol, which would involve the players being taken temporarily off the pitch.

The final stage of the protocol would have been the abandonment of the match.

Ian Wright said the collective action against the racist chanting meant it was “a great day” in the fight to combat discrimination.

The former England and Arsenal forward, speaking as part of ITV’s punditry team for the match, said: “It’s a terrible day for the Bulgarian people and how they have been represented, (but) it’s a great day in respect of trying to tackle racism.

“We can see over in that stand with those (anti-racism) banners, they mean nothing. What we’re seeing is a set of fans who do not care and need educating.

“As a black player, we’ve heard it for many years about walking off (in the event of racist abuse).

“But you do need your white players to do that for you, so you can go off together. When that can happen, when you can see how powerful that is, that will do something.”

The president of the Bulgarian Football Union, Borislav Mihaylov, had been critical of comments made by England in the build-up, suggesting talk of racist abuse was “unjust branding” of Bulgaria and its supporters.

Gareth Southgate credited England’s players after they came through an “unacceptable situation” in Bulgaria having “raised the awareness of everyone” to racism.

The Three Lions emerged with a 6-0 win but the main talking point of the Euro 2020 qualifier in Sofia came off the pitch as home fans subjected England’s players to racist abuse.

England decided not to leave the pitch in protest and manager Southgate felt the stance was not only the right one but an effective one.

“We know it is an unacceptable situation,” he told ITV. “I think we have managed to make two statements by winning the game but also we have raised the awareness of everyone to this situation.

“The game was stopped twice and I know for some people that won’t be enough but I think as a group we were on board with that process.”

Manchester City forward Raheem Sterling was quick to take to social media to condemn the abuse. Retweeting a news article in which Bulgaria coach Krasimir Balakov accused England of having a bigger racism problem than his own country, the Manchester City man commented: ” Mmmmh … Not sure about this one chief.”

He added: “Feeling sorry for Bulgaria to be represented by such idiots in their stadium. Anyway.. 6-0 and we go back home, at least we did our job. Safe travel to our fans, u guys did well”

Marcus Rashford also took to social media after the match, saying: “Not an easy situation to play in and not one which should be happening in 2019. Proud we rose above it to take three points but this needs stamping out.

“Thankful to the brilliant England support. You got behind us in the most meaningful way possible tonight and we are all very grateful. Have a safe journey home and take care.”

Bulgarian captain took on racist home fans at half time

Bulgaria captain Ivelin Popov was seen in a heated debate with a section of home supporters near the tunnel as the rest of the players headed for the dressing rooms at half-time.

Rashford added: “Also been told what the Bulgaria captain did at half-time. To stand alone and do the right thing takes courage and acts like that shouldn’t go unnoticed.”

Bulgaria coach Krasimir Balakov insisted he was unaware Popov spoke to a group of supporters at half-time, adding: “It is probably because the fans were unhappy with the way the team was performing.”

Tyrone Mings, one of the targets for the abuse, admitted what should have been a special personal landmark was tarnished. “It was a great occasion, I made my England debut, but it was slightly overshadowed by a few disappointing chants which were clear to hear on the pitch,” he told ITV.

“I thought we showed a great response, a good togetherness and ultimately we let the football do the talking. “Hopefully the higher powers will deal with the incidents that happened, we couldn’t do much more on the pitch.”

MPs have called on European football’s governing body to come down hard on Bulgaria after England players were subjected to “abhorrent racist chanting” during the Euro 2020 qualifier in Sofia.

Labour leaders Jeremy Corbyn led calls for action to tackle racism after the debacle. “UEFA needs to do far more to tackle this kind of abuse” he tweeted, expressing solidarity with the England players.

It came after an England fan died in the build-up to Monday night’s match.

Writing on Twitter, sports minister Mr Adams said: “Tonight the @England team have been subjected to disgusting abuse. Racism should never be tolerated. Discrimination must be stamped out from the game and I expect tough action from @UEFA to follow. The @England players have my full support.”

Ms Berger added: “In the face of disgusting racism and such ugly scenes, @England won. But they shouldn’t have been subjected to it. @UEFA have to stop this from happening at all. Now.”

Labour MP Rosena Allin-Khan offered “absolute solidarity” with England’s players, and said she had spoken to the FA after the match.

She said: “There can be no place for racism in football – you have a country behind you tonight. We need fans, clubs, press and politicians to join in solidarity!

“Tonight, I’ve had a conversation with the FA Chief Exec and made clear that the England team has my full support. UEFA must come down hard on racism – a generation of players and fans are watching. Time to set an example.”

“This is a seminal moment. We’ve got a generation of players and people who won’t tolerate this anymore” insisted former England legend Ian Wright, insisting action needed to be taken and FIFA protocols followed to punish racism.

England fan died before the match

Earlier, Bulgarian authorities confirmed the death of a British national.

The unnamed 32-year-old was said to have been acting “aggressively, raging and threatening” when he was discovered at around 10am on Monday ahead of the crunch match in the city.

A spokeswoman for the Ministry of Interior said no cause of death has been identified.

She told the PA news agency: “A 32-year-old man has sadly died.

“At 10am today, the police received a signal to attend a man in a helpless condition, in the city centre.

“He was a foreign national, from Britain, and he was taken to hospital but he sadly died.

“Police are working to clarify all the circumstances in the incident. There is no further detail on any injuries.

“There will be a forensic examination to find out what the cause of death was.”

A statement on the authority’s website added that in hospital, the victim “suddenly began to act aggressively, raging and threatening”.

A Foreign Office statement added: “We are supporting the family of a British man who died following an incident in Sofia, and our staff are in contact with the UK and Bulgarian authorities.”