By Joe Mellor, Deputy Editor After decades of looking for the Loch Ness Monster, a research team came across this shape on their radar. Had they found the most famous and most illusive creature on the planet? Well, no, they haven’t. It turns out the shape was in fact a film prop from the 1970s. […] 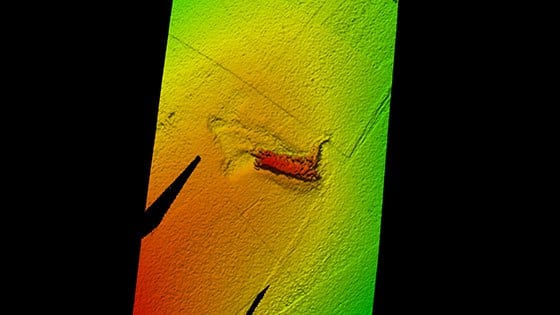 After decades of looking for the Loch Ness Monster, a research team came across this shape on their radar.

Had they found the most famous and most illusive creature on the planet? Well, no, they haven’t.

It turns out the shape was in fact a film prop from the 1970s. Nessie hunters will have to continue their search. The prop is believed to have come from a film shoot for The Private Life Of Sherlock Holmes, which was directed by Hollywood legend Billy Wilder.

Christopher Lee starred in the 1970 film and the prop is thought to have sunk after its humps were removed and it had not been seen again until now. The object was discovered on the loch bed in a 755ft deep stretch of water. Currently a robot called Munin is being used to explore the murky depths of the loch. The marine vessel can map to depth of 4,921ft (1,500m) and in the past has been used to look for sunken vessels and downed airplanes.

A spokesman for VisitScotland said: “Operation Groundtruth has uncovered a recognisable creature.

Although it is the shape of Nessie, it is not the remains of the monster that has mystified the world for 80 years, but a star of the silver screen.”

Loch Ness project leader Adrian Shine said: ‘Because Munin can dive and navigate itself safely at great depth, it can approach features of interest and image them at extremely high resolution.

‘We already have superb images of the hitherto difficult side wall topography and look forward to discovering artefacts symbolic of the human history of the area.’

The Nessie hunting industry is estimated to bring in £60 million to the Scottish economy, with hundreds of thousands f people travelling to the Loch hoping to catch sight if the famed monster.