The teenage climate activist was recently filmed telling politicians to stick the climate crisis where the sun doesn't shine. 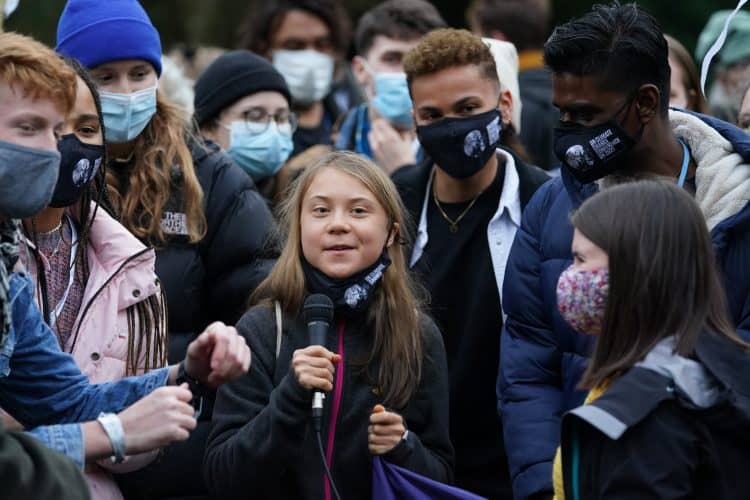 Greta Thunberg pledged to go “net zero” on swearing, days after being videoed telling politicians to “shove your climate crisis up your arse”.

The Swedish activist said she has reflected on her language after being filmed hyping up crowds in Glasgow.

Footage published on Monday showed the 18-year-old speaking to young protesters in Festival Park in Govan, across the River Clyde from the Cop26 venue.

She said: “Change is not going to come from inside there – that is not leadership, this is leadership.

Later on, she was filmed singing: “You can shove your climate crisis up your arse”.

But now the teenager has since joked she is now going to continue “net zero” on her language.

Writing on Twitter, she said: “I am pleased to announce that I’ve decided to go net zero on swear words and bad language.

“In the event that I should say something inappropriate I pledge to compensate that by saying something nice.”

During her speech, she said: “This is not about some expensive, politically correct, green act of bunny hugging.

“This is all we hear from our so-called leaders. Words that sound great, but so far have led to no action.”

…and accused the UK government of spinning carbon emissions statistics

Last month, the Swedish activist accused the UK government of spinning carbon emissions statistics to make it look like the country’s contribution to the climate crisis is lower than it is in reality.

Thunberg said Britain is not the only high-income country wrongly thinking it is a climate leader, suggesting the US and China are also to blame.

In an article for The Guardian, the 18-year-old said world leaders have been guilty of decades of “blah, blah, blah” because of their lack of action on reducing emissions – and explained why the UK is “relying on creative carbon accounting” rather than producing real change in tackling the climate emergency.