Stephanie Barwise QC said: “The timing of this application is highly disingenuous and bears all the hallmarks of sabotage of this inquiry. The firefighters were just as much at risk of prosecution under the Health and Safety at work Act and yet freely gave their evidence without seeking undertakings.” 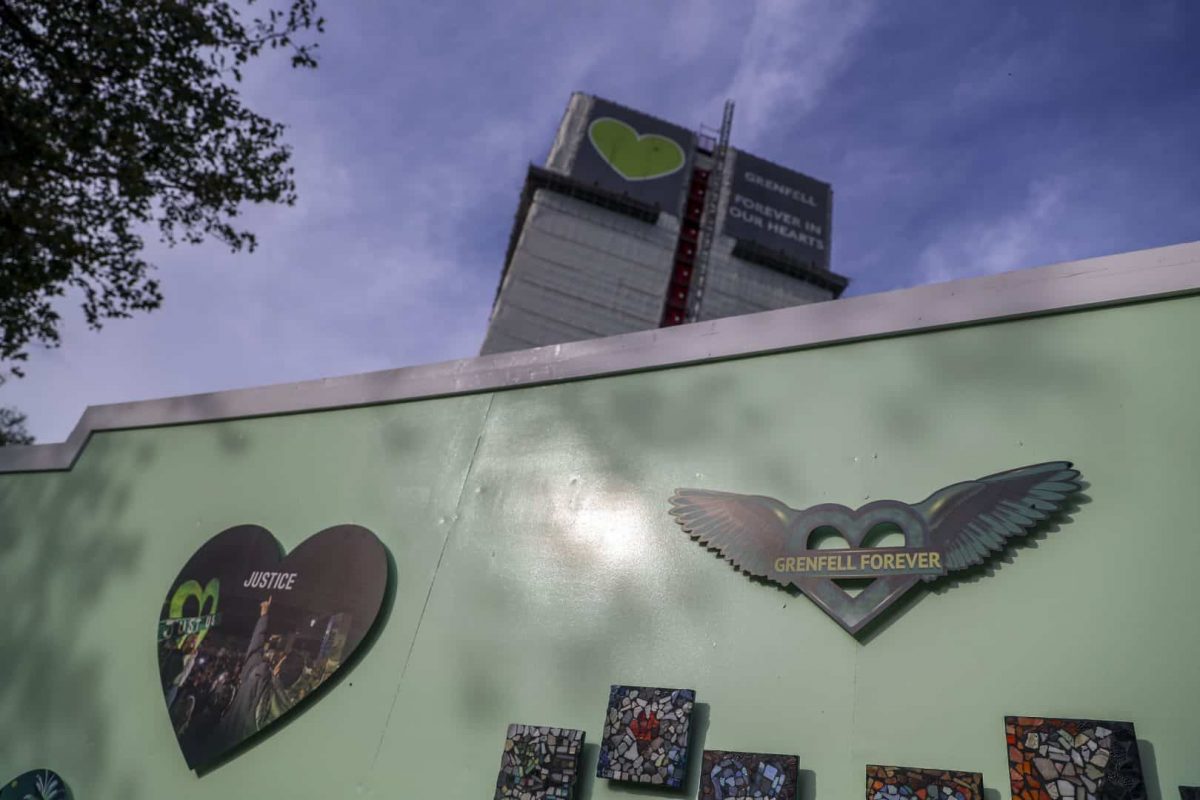 Companies that refurbished Grenfell Tower “killed those 72 people as sure as if they had taken careful aim with a gun and pulled the trigger”, the public inquiry into the disaster has heard.

Now witnesses involved in choosing flammable materials for the revamp were also accused of trying to “sabotage the inquiry” after they threatened to stay silent unless they are given immunity from prosecution.

The chairman of the inquiry into the Grenfell Tower disaster has been advised by its chief lawyer to seek assurances any evidence corporate witnesses give will not be used against them in criminal proceedings.

Staff from firms involved in refurbishing the 24-storey block with flammable materials had been due to be cross-examined before they submitted a last-minute legal bid seeking the Attorney General-backed pledge.

Without it, many had threatened to stay silent by claiming the legal right of privilege against self-incrimination. Counsel to the inquiry Richard Millett QC made the recommendation on Monday by saying if key witnesses refused to answer questions it would “frustrate the exercise of public investigation” and only give the public a “partial picture”. He told chairman Sir Martin Moore-Bick: “The inquiry needs witnesses to be able to tell the unvarnished truth.”

It comes after the inquiry heard claims the firms were trying to “derail” and “sabotage” the investigation into the fire which killed 72 people in June 2017 by “essentially dictating the terms in which they will provide their assistance”.

The fire brigade have already testified to the inquiry and the Fire Brigades Union (FBU) called the firms’ insistence “an affront to justice and those who lost their lives.”

Matt Wrack, FBU general secretary, said: “This tactic from corporate witnesses is a complete disgrace, especially at this stage in the inquiry.

“No firefighter sought immunity from prosecution during their evidence to the inquiry. Each and every one of our members did their utmost to give an accurate account of the night. They gave evidence honestly and unreservedly so that the community they serve could find the truth.

“There is no good reason for the corporate entities who wrapped Grenfell in flammable cladding to seek immunity. Anything less than total honesty will undermine the Inquiry and will be an affront to justice and those who lost their lives.”

Mr Millett said he considered it in the public interest for Sir Martin to ask for the undertaking but expressed “some regret perhaps” over the “timing and manner” in which it was sought. He told Sir Martin: “Without the full facts found by you based on a complete exploration of the evidence through the witnesses we would like to call, you would not be able to make recommendations at all, let alone recommendations for lasting and deep change.

“Putting it simply, the purpose of criminal proceedings is punishment for the commission of an offence. The purpose of this inquiry is to find out exactly what happened at Grenfell Tower, why it happened and who was responsible so that it never happens again.

“That is why you in our submission need to clear the way so that there is absolutely no impediment at all for each and all of the witnesses we seek from going into that witness box and answering our questions on pain of punishment if they don’t.”

Scotland Yard is conducting its own parallel investigation into gross negligence manslaughter, corporate manslaughter and health and safety offences.

‘Attempt to derail this inquiry’

Representing victims, Michael Mansfield QC said there is an “overwhelming and strong” consensus opposing the application. He said: “We say it is abhorrent to the interests of justice that those who are potential perpetrators of this inferno, who have caused the loss of life, injury, which is often overlooked, the loss of homes: then, and continuing now and well into the future, can those potential perpetrators come here and essentially dictate the terms in which they will provide their assistance?”

He said the timing of the application appears to be an “attempt to derail this inquiry”, adding: “If it was serious, this would have been done months ago.”

Stephanie Barwise QC, for another group of victims, said: “In short, the timing of this application is highly disingenuous and bears all the hallmarks of sabotage of this inquiry.

“The firefighters were just as much at risk of prosecution under the Health and Safety at work Act and yet freely gave their evidence without seeking undertakings.”

There were groans from survivors and victims on Wednesday after staff at key companies submitted a “highly reprehensible” last-minute legal bid seeking an Attorney General-backed guarantee which would stop any evidence they gave being used against them in future criminal proceedings.

Mr Millett urged Sir Martin to come to a “speedy conclusion” in his decision, saying: “This inquiry has proceeded at speed and must continue to do so because there are major questions of public safety which our investigations have revealed and which need to be addressed with the utmost urgency.

“Any delay without a very good reason is not just inconvenient but potentially dangerous.”

The hearing has been told designers, contractors and fire safety engineers had “expressly foreseen” the risks of installing the planned cladding system – which would fuel the rapidly spreading fire in June 2017.

Main contractor Rydon, external wall subcontractor Harley Facades, refurbishment architects Studio E and fire inspectors Exova allegedly knew the proposed cladding in which the 129-flat tower was to be encased would burn and fall off if exposed to fire.

Combustible aluminium composite material (ACM) cladding panels were chosen in 2014 as an alternative to zinc to save up to £454,000 on the £9.2 million Grenfell Tower refit, the inquiry has heard.

Sam Stein QC, for another group of victims, told the hearing: “The companies responsible killed those 72 people as sure as if they had taken careful aim with a gun and pulled the trigger.

Ms Barwise attacked the suppliers of the combustible insulation and cladding panels, Celotex and Arconic respectively, as displaying an “extraordinary degree of contempt” for residents’ safety by marketing their flammable products.

She said Celotex targeted the 220ft (67-metre) west London building as a “flagship” project for its RS5000 insulation, and cynically exploited what one of its bosses called “the smoke of confusion” around building regulations.

It actively promoted the material despite senior executives knowing it should have been recalled after safety tests, she added.

In an email exchange between Celotex and one of its distributors, the firm’s head of technical, Rob Warren, wrote it was “clearly wrong” when an inspector “said it was OK to use any insulation up to 18 metres (59ft), and only above 18 metres did it have to be non-combustible”.

He added: “The fire hasn’t got a tape measure and if it starts at the ground floor it will love to race up the first 18 metres. Just shows the smoke of confusion out there.”

The distributor, Martin Stearne at SIG Technical Services, replied: “Never has the expression ‘smoke and mirrors’ been more appropriate”, and added that “if specifically challenged” he would opt for a different product but “if I’m not challenged it’ll be RS5000″.

Ms Barwise further said Arconic almost doubled its UK sales target for the dangerous cladding used on Grenfell Tower in the years before the blaze after it was given the second-lowest fire safety rating in European tests.

The US conglomerate was accused of trying to offload its Reynobond PE cassette cladding in Britain after it was given a European class E rating, threatening sales on the continent in markets such as Spain.

An email exchange showed the Grenfell Tower project was one Arconic was “confident” it would secure, which Ms Barwise said contradicted the firm’s position it was just a manufacturer which sold a product – saying its distributors “targeted potential contractors in projects”.

Its Reynobond PE panels featured a polyethylene core, which has a heat combustion akin to diesel and close to lighter fluid – and has a high-calorific value compared with other construction materials, Ms Barwise said.

She criticised as “absurd” Arconic’s statement when it said “the tragedy at Grenfell Tower shows the awful consequences which can arise when combustible materials are used in a particular combination and configured in a particular manner”.

She said: “That is not what the fire at Grenfell shows.

“It shows that the use of a thermoplastic with a heat of combustion similar to lighter fuel within any construction is likely to result in an uncontrollable inferno… the dripping, burning droplets will set fire to anything in its path.”

Ms Barwise also criticised the evidence given by the Kensington and Chelsea Tenant Management Organisation (TMO), saying the now-defunct organisation had not acknowledged its “contribution to loss of life”.

A “very significant example” of its negligence was its failure to produce personal evacuation emergency plans for the many disabled residents, she said, adding that with regard to cladding products it “appeared to display concern only for aesthetic qualities”.

Seventy two people died as a result of the blaze at the west London block after an electrical fault with a fridge freezer sparked a catastrophic fire.