"While people stayed at home to protect the NHS, the Prime Minister was engaging in drinking and debauchery that makes a mockery of the sacrifices each and every person made.” 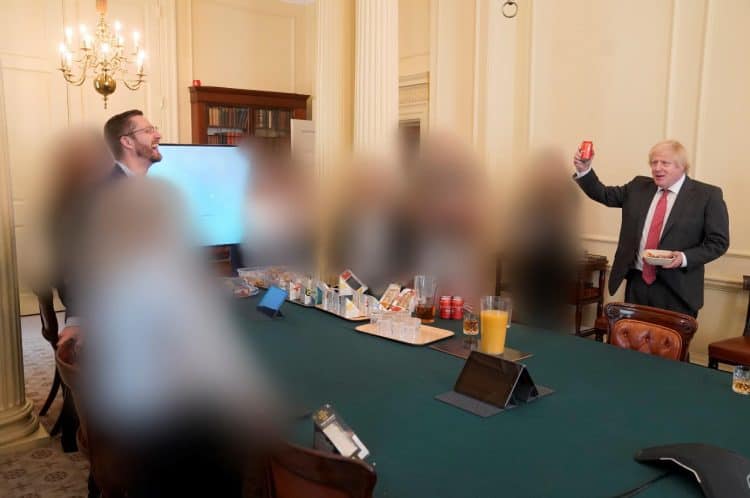 The Government’s then-ethics chief provided a karaoke machine for a lockdown event where one individual was sick and there was “minor altercation” between two others.

The story comes as SNP’s Ian Blackford slammed the “drinking and debauchery” going on in Downing Street during the Covid lockdowns.

Sue Gray’s report revealed that employees partied from June 18 2020 until the early hours of the following morning during the “second phase” of a leaving do for a former No 10 official.

She said there was “excessive alcohol consumption” by some at the impromptu gathering and even a clash between two people present.

Helen MacNamara, then-deputy cabinet secretary with responsibility for propriety and ethics, attended for “part of the evening and provided a karaoke machine”, the report said.

Ms MacNamara, who now works for the Premier League, was fined last month by the Metropolitan Police for her part in the leaving do and issued an apology for her “error of judgment”.

Ms Gray’s interim report published in January first revealed an event to mark the departure of a No 10 private secretary in June 2020.

While the departing aide has not been named by Ms Gray, the Telegraph has reported that it was former home affairs adviser Hannah Young, who left Downing Street to become deputy consul general in New York.

At the time of the gathering, Covid rules stipulated that people were only allowed to meet outdoors in groups of up to six, as long as they remained two metres apart.

In her full report published on Wednesday, Ms Gray recorded how Boris Johnson’s then-private secretary Martin Reynolds was warned by then-director of communications Lee Cain of the “rather substantial” risk for No 10 if a leaving event was organised.

However, the event went ahead, with 25 people attending the formal first part of the leaving bash and more joining online by Zoom, according to the 37-page written report.

Alcohol was available and Stuart Glassborow, deputy principal private secretary to the Prime Minister – who is reportedly due to leave his position this summer – gave a speech.

The Prime Minister’s then-de facto chief of staff Dominic Cummings and Simon Case, the then-permanent secretary for Covid and now Cabinet Secretary, were also in attendance.

Ms Gray said a second phase of the event, starting at around 7.40pm, saw people moving into the waiting area outside the private office of Sir Mark Sedwill, who was the cabinet secretary, at 70 Whitehall.

Not all those at the first stage joined the second phase.

Ms Gray wrote: “Some brought pizza and prosecco and they were followed by others, over the next couple of hours.

“Helen MacNamara, deputy cabinet secretary, attended for part of the evening and provided a karaoke machine which was set up in an adjoining office to the waiting room.

“The event lasted for a number of hours. There was excessive alcohol consumption by some individuals.

“One individual was sick. There was a minor altercation between two other individuals.

“The event broke up in stages with a few members of staff leaving from around 21:00 and the last member of staff, who stayed to tidy up, leaving at 03:13.”

The document said that during the party, Sir Mark returned from a meeting and saw those gathered in the waiting area.

‘A fish rots from the head’ says Ian Blackford

He said Boris Johnson had adopted a “sinister pattern of evasion” throughout the Sue Gray investigation and that he was devoid of honesty and ethics.

“He can shake his head, but that’s the reality”, he said.

Not mincing his words, Mr Blackford added: “The Prime Minister brings shame on the office”.

He also said Boris Johnson engaged in a culture of “drinking and debauchery.”

Speaking at the Commons, Ian Blackford said: “Empty bottles littering offices, rooms so crowded people were sitting on each other’s laps and security forced to intervene because the parties were so outrageous.

“At the centre was the Prime Minister orchestrating it, grabbing a glass for himself in order to toast the party goers.

He added: “For eight months, we’ve heard every excuse under the sun but now we’ve all seen the damning photo evidence. While people stayed at home to protect the NHS, the Prime Minister was engaging in drinking and debauchery that makes a mockery of the sacrifices each and every person made.”