The 2017 Labour manifesto pledged to renationalise the energy industry and was dubbed a 'return to the '70's' by the right-wing press. 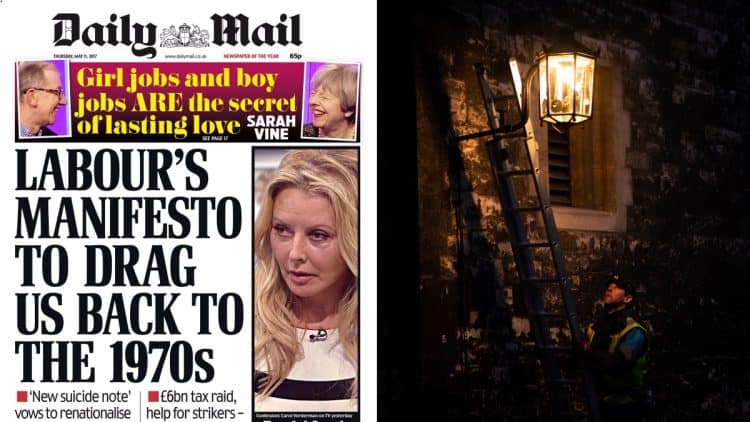 1970’s-style blackouts are being considered by the government under emergency plans being drawn up by officials.

A new ‘reasonable worst-case scenario’ envisages a 4-day power shortfall, with industry and even households facing planned power outages for the first time in 50 years.

Under that outlook, below-average temperatures and reduced electricity imports from Norway and France could expose four days in January when the UK may need to trigger emergency measures to conserve gas.

The scenario is “not something we expect to happen,” the government Department for Business, Energy and Industrial Strategy said in a statement. “Households, businesses and industry can be confident they will get the electricity and gas they need.”

In July, at the height of the first heatwave, London narrowly avoided a blackout as electricity prices surged.

The analysis lays bare the difficult winter that is potentially in store.

Several people on social media have shared photos from the 1970s, when the UK last endured blackout conditions due to strikes.

Workers were reduced to a three-day working week and TV companies including the BBC and ITV had to stop broadcasting at 10.30 pm each night.

Many households were ordered to limit heating to one room and to keep non-essential lights switched off.

People have also been quick to point out that Jeremy Corbyn’s manifesto in 2017 was labelled a “return to the 1970s” by much of the right-wing press.

The former Labour leader’s vision for Britain, described by the Mirror as the “most left-wing election manifesto in a generation”, had at its heart the re-nationalisation of the railways, Royal Mail and, crucially, the energy industry.

It led to dire warnings from the right-wing press.