“You’re framing it in a leftwing way, Tom", Truss said in response to a question on the cost-of-living crisis. 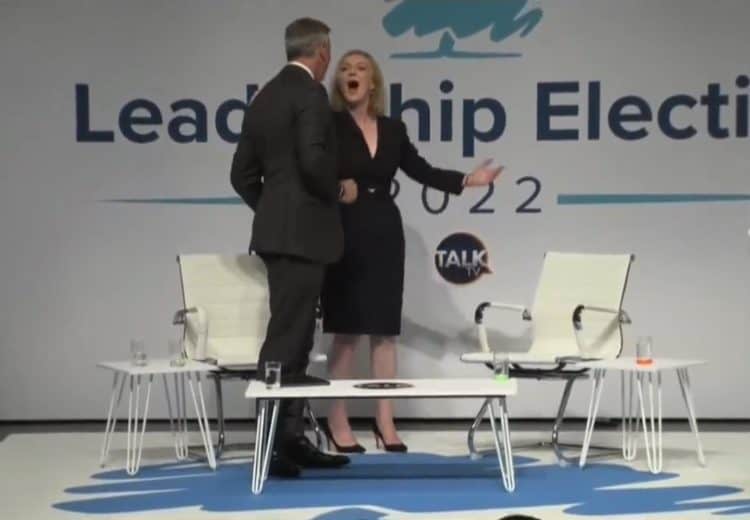 Arguments over the media’s supposed left-wing bias threatened to spill over following the latest leadership hustings in Darlington.

The pair clashed heads after Newton Dunn asked what support the Tory leadership hopeful was prepared to give struggling families this winter as the cost-of-living crisis intensifies.

Newton Dunn mentioned “your handouts” as he sought to pose a question on the perilous situation.

Truss interrupted, replying: “They are not giveaways, Tom. This is people’s money, but this is the problem with the way that every question is framed.”

She added: “You’re framing it in a leftwing way, Tom. I’m afraid the whole media does this all the time … it drives me mad.”

“You’re framing it in a leftwing way, Tom”

Truss was later asked if Boris Johnson’s downfall as prime minister was of his own making or someone else’s. Some audience members shouted out, saying it was the “media”.

Truss said: “Sounds like you’re being blamed, Tom, and, you know, who am I to disagree with this excellent audience?”

Asked to clarify her view, she outlined that she was a “loyal cabinet minister”, but did not directly answer the question, saying “what is done is done and we are where we are”.

Later, talking about spending commitments and her plans, Truss said: “I believe in Britain, unlike some of the media who choose to talk our country down.”

Newton Dunn replied: “For the record, that’s the third time you’ve attacked the media – a lot of which supports your campaign.”

At the end of the debate she was caught on a microphone apologising to Newton Dunn, saying: “I am sorry I was mean about the media, Tom.”

Newton Dunn replied that the jibes about the media were “cheap”.