It comes after six people including a police constable were injured in a knife attack at the Park Inn Hotel on West George Street on Friday. 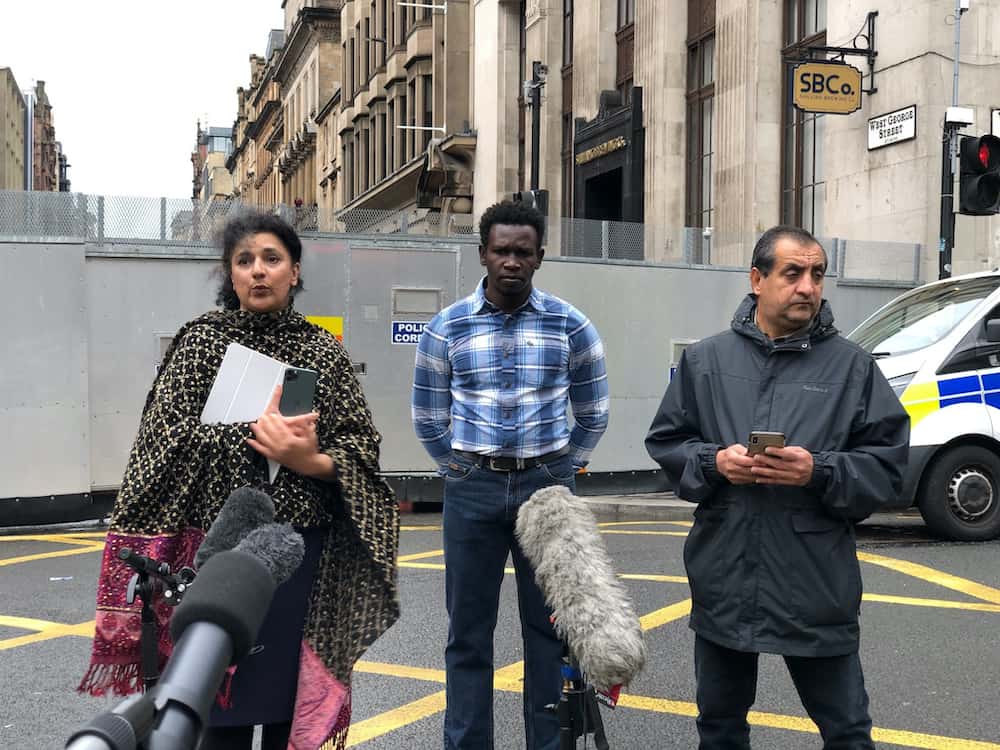 (left to right) Robina Qureshi from the charity Positive Action In Housing, Andrew (no last name given) an asylum seeker and Mohammad Asif speaking to the media in Glasgow about the asylum seeker "accommodation crisis" in Glasgow after an attack in the city last week.Credit;PA

Asylum seekers in Glasgow have been treated like “Amazon parcels” during the coronavirus pandemic, according to a charity calling for an inquiry into their accommodation facilities.

It comes after six people including a police constable were injured in a knife attack carried out by 28-year-old Badreddin Abadlla Adam, from Sudan, who was shot dead by officers at the Park Inn Hotel on West George Street.

The hotel was being used to house asylum seekers at the time, with campaign groups criticising the decision to do so having been in the middle of the coronavirus pandemic.

Private housing provider Mears is subcontracted by the Home Office and has come under fire for moving refugees from self-contained accommodation to the hotels during lockdown.

Homelessness and human rights charity Positive Action in Housing, whose office is situated just a few doors down from the Park Inn, is now pushing for an independent investigation into the procurement process after Friday’s events.

Director Robina Qureshi said: “You and I know that staying inside a house is difficult enough through the pandemic.

“People that Mears took and the Home Office uprooted in March at the height of the lockdown were vulnerable people.

“They were not Amazon parcels, they were human beings with feelings and thoughts and fears, and they were terrified of what was happening next and why they were put into these hotels.”

She added: “Some have told us directly they were told they were going into long-term accommodation, but were put into two vans (four or five to a van), and then parcelled off into hotels all over the city, not just jeopardising the asylum seekers, but also jeopardising the public health of the city of Glasgow.

“This was not a movie. This was a real thing. And they were very frightened people who have been traumatised on the journey from being tortured.”

Among concerns raised by the charity are claims the asylum seekers are no longer receiving their allocated £5.39 a day.

Ms Qureshi said they had been told this was for concern for “their safety in case to catch a virus from the coins”.

One asylum seeker, Andrew, was staying at the Park Inn Hotel for two months but has since been moved to the Hallmark Hotel after Friday’s incident.

He said: “We don’t have the opportunity to have money to take care of ourselves.

“They water we are drinking, when we were in the Park Inn hotel, was from the tap water inside the toilet.”

Alison Thewliss MP said: “The Home Office must take responsibility for the wellbeing of all asylum seekers currently being accommodated in hotels in Glasgow.

“Support payments must be reinstated immediately.”

Mears referred press inquiries on the issue to the Home Office.

A Home Office spokesman said: “Throughout this pandemic, we have prioritised providing asylum seekers who would otherwise be destitute with free and safe accommodation that enables public health guidance to be followed as well as access to healthcare services.

“Cash allowances are not provided as their essential living needs and costs are being met by the accommodation provider.”