His 22-year-old girlfriend watched as he entered the water before she was later rescued and found out that he had died. 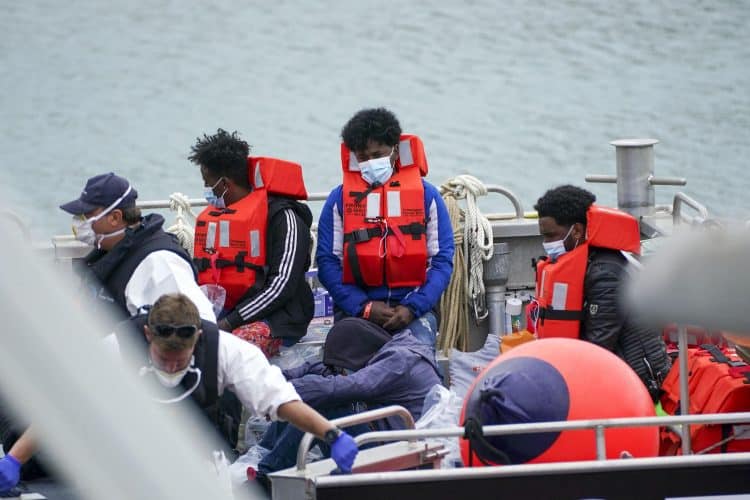 A 27-year-old man from Eritrea died after he and four others jumped overboard as their boat started to sink in the English Channel.

His 22-year-old girlfriend watched as he entered the water before she was later rescued, a French migrant help organisation told the PA news agency.

After being returned to port in Dunkirk, she later discovered that her boyfriend had tragically died after being taken to hospital.

Around 36 people were aboard the boat trying to cross to the UK on Thursday when it got into difficulty amid strong seas in the Dover Strait, prompting a huge emergency response.

A manslaughter investigation is now under way in France following the death, and charities say it is a “sobering reminder” of the struggles faced by refugees seeking a better life.

At least 155 people were intercepted by French authorities and returned to the continent on Thursday, while others reached the UK.

Thursday’s loss of life did not stop more people from attempting the journey on Friday, with groups seen being brought into the port of Dover in Kent after crossing the Channel.

Speaking to PA, Nikolai Posner – from Utopia 56 – said five men had jumped from the sinking boat during the dramatic incident on Thursday morning.

Among them was a 27-year-old man from Eritrea, whose girlfriend was also on board the boat, according to Mr Posner.

A helicopter from the Belgian Air Force arrived at the scene, along with fishing boats and a cargo ship.

“The helicopter picked up 10 people, but they dropped them back on the boat, the [French Navy’s] Flamant.

“Just one (the 27-year-old) that they picked up went directly to the hospital,” Mr Posner told PA.

The man is believed to have suffered cardio-respiratory arrest, French authorities said, and died in hospital in Calais.

Mr Posner added that he spoke to a group of people from another failed crossing on Thursday.

“The main issue was the sea was very very strong,” he said. “For most of them it was their first try.”

An investigation for endangering lives and manslaughter has been launched by the Dunkirk public prosecutor following Thursday’s boat sinking.

The man who died has not yet been publicly identified, but the prosecutor’s office said he is aged between 25 and 30 and of African descent.

So far, more than 10,000 people have made the perilous crossing aboard small boats, data compiled by PA shows.

Crossings in 2021 have already eclipsed last year’s annual total of 8,417 and that total continues to rise on fair weather days.

Related: Tragedy in Channel: Grim roll call of people who have died attempting to cross body of water