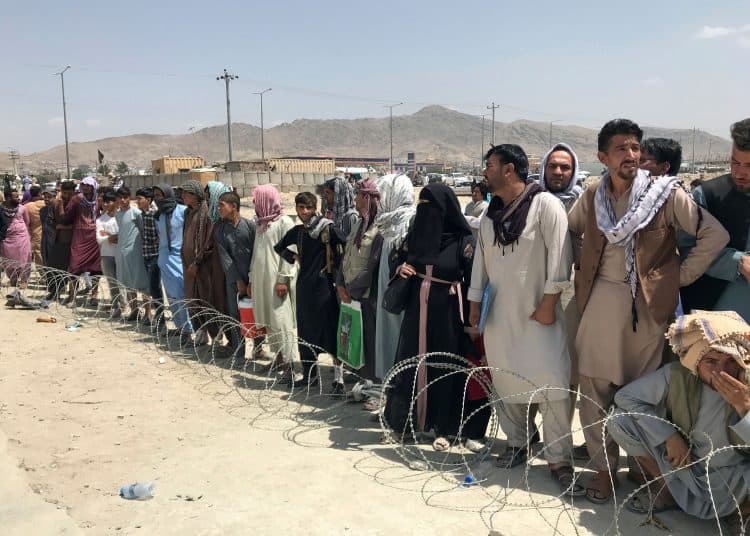 There has been anger as a t-shirt mocking people who died while desperately attempting to flee Afghanistan, by clinging onto a place, is being sold online.

It depicts a military aircraft with the outline of two bodies falling out the back with the phrase “Kabul Skydiving Club Est. 2021.”

“Today we witness such a plane disaster in Kabul airport when 2 people falling from the Airplane in Afghanistan. The scene was full of chaos and we cannot deny the fact that Afghanistan is being taken over by the Taliban and the Afghans were trying to cling to planes, with the aim to escape from the country.

“We were truly heartbroken and empathetic with the horrifying death of 2 people falling from the plane, and it was a shock when the rest of the world understand how the people of Afghanistan are facing the situation over there. Deep in our heart, we pray for Afghanistan, and may the soul of the two people who fell from the plan rest in peace.

While in the next breath, they insensitively describe how “the Kabul Skydiving Club Shirt is officially becoming a phenomenon and goes viral on the Internet.”

“Taliban seized the capital Kabul, which causes the escape of thousands of Afghanistan people in Kabul’s airport on 17 Aug 2021. Two people – falling from the sky, out of the airplane, it hurts all of us.

“The shirt is originally not funny, it does have its own meaning in the political aspect, but in the end, it depends on how you feel about it!”

A t-shirt called “Kabul Skydiving Club Est. 2021 being sold on @Etsy along with their “community guidelines” that they obviously just pay lip service to.
Sick and shameful after what happened at the airport.
Cc @GBNEWS pic.twitter.com/yo4Kb6GzJX

Some human beings really are sick, and ought to be openly regarded and declared as such. https://t.co/daDEfGh07D

As Afghans are fleeing and clinging to planes out of desperation, someone decided to capitalize on their pain and misery with this repulsive t-shirt.

It’s being sold on at least half a dozen t-shirt printing websites right now. Humans can be so cruel. pic.twitter.com/du5cCbD2QA

This is what we've becone, apparently.