The ‘competitive socialising venue’ has reopened both London sites, as well as launching in the US. 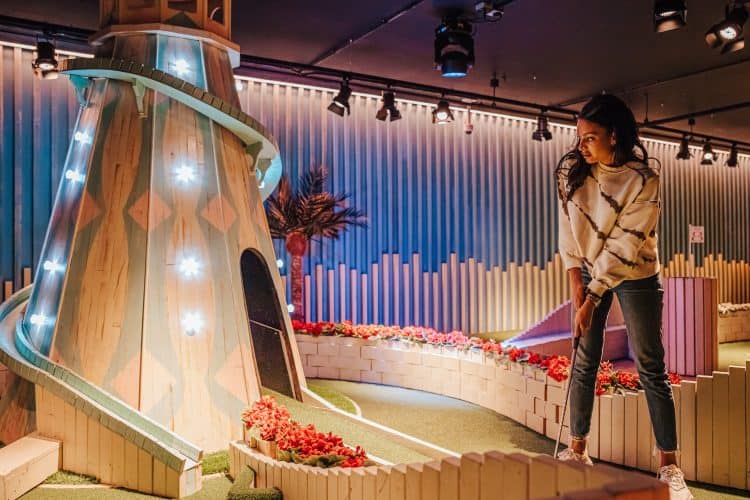 In a similar vein to restaurants such as Sixes Cricket Club and Sluggers at Boxpark, Swingers is touted as a ‘competitive socialising venue’, with its two London outposts having fully re-opened.

Following the success of a five-month pop-up at Factory 7 in Shoreditch, founders Matt Grech-Smith and Jeremy Simmonds opened the first permanent Swingers site in 2016, taking over an 18,000 square foot site in the City, offering crazy golf, food traders, and signature cocktails. With two nine-hole crazy golf courses, five bars, and three street food vendors, the site turned over £10 million in its first year and another site soon opened in the West End. The group has also recently expanded into the US, with a location in Washington D.C. set to be followed by a Swingers in New York City.

On Swingers, Co-founder Matt Grech-Smith says: “The idea behind Swingers was to create a one stop shop for your night out with the opportunity for competitive fun, delicious street food, sensational cocktails and top-notch service in a totally unique, theatrical space. After the last year we know that guests are desperate to recapture the spirit of those lost nights out and catch up with people they haven’t seen in so long. So, we’ve done the hard work. We have everything one could need for a return to socialising, under one roof. That just leaves you to rally your friends, dust off your putting skills and head down”.

Designed to evoke the 1920s English Riviera, the West End venue occupies the former BHS flagship store just behind Oxford Circus, with two nine-hole crazy golf courses, four bars, four street food vendors, and plenty of space that’s available to privately book. Each of the venue’s crazy golf courses offer a different skill test, such as the ‘Helter Skelter’, featuring a loop the loop, and the ‘Big Wheel’ with slingshots and moving parts. The venue’s food and drink offering also makes Swingers a destination in its own right.

As for Swingers West End’s food stalls, Patty & Bun and Breddos Tacos have recently been joined by Slice by Pizza Pilgrims, which serves pizza by the metre or in 14-inch slices. Hackney Gelato are also on hand with gelatos, sundaes, and alcoholic shakes which are a must-try. Other highlights from across the board include Patty & Bun’s ‘MR T’ burger stacked with buttermilk fried chicken, Monterey Jack cheese, bacon, and hot sauce; plus fries loaded with slow-cooked brisket and grated parmesan.

The entire Breddos Tacos selection is worth ordering, though the masa fried chicken thigh taco; Baja fish with salsa habanero; and smoked sweet potato with feta, almond chile and peanuts are particular standouts. As for the pizzas from Slice by Pizza Pilgrims, each is based with the restaurant group’s dough that’s double-fermented for 48 hours, then topped with ingredients sourced from Italy. The Margherita is both faultless and failsafe, but for something a little different, the pepperoni and chilli honey has exceptional balance, best washed down with a pint of Beavertown’s Neck Oil or one of the Swingers bar’s cocktails.

RELATED: Quality Chop House: a cut above the competition