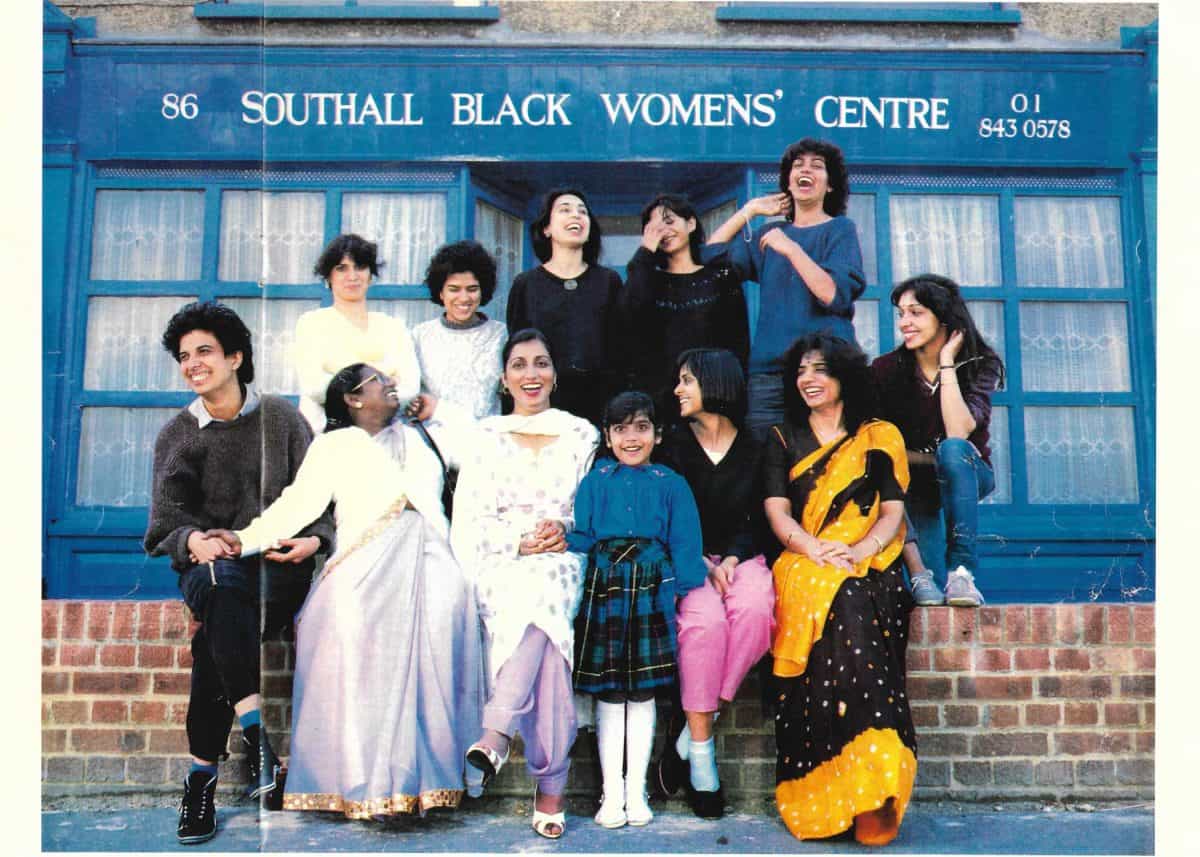 When Kiranjit Ahluwalia was jailed for life for setting fire to her husband Deepak in May 1989, a small band of dedicated activists picked up a baton that Kiranjit’s legal team had dropped.

Kiranjit had suffered a decade of abuse and unspeakable brutality at the hands of her husband and now faced a tariff of 12 years in jail while her young children were brought up by her abuser’s family.

Despite an original legal team who advised there were no grounds of appeal, Southall Black Sisters compiled a dossier of evidence and a campaign so persuasive, Kiranjit was not only released from prison three years later, but the way courts interpreted ‘provocation’ as a defence to murder was never the same again.

Kiranjit’s is but one of a litany of notorious cases and campaigns with which Southall Black Sisters have redefined human rights for women and minorities over the past four decades.

Celebrating the fortieth year of Southall Black Sisters, Pragna Patel who has been at the helm of the group through most of its biggest campaigns told The London Economic “highlighting Kiranjit’s case as a miscarriage, touched on everything that was wrong with the criminal justice system’s interpretation of coercion, control and provocation when it comes to women.”

These are all themes that Pragna and her fellow campaigners have fought on time and again in countless cases over the past four decades.

On Saturday as part of a series of events marking forty years of Southall Black Sisters, Pragna and Kiranjit are attending a special showing of the movie Provoked that was made about the landmark case, where Kyranjit will talk about it.

Pragna who later trained in law and is now a solicitor herself, has worked with law centers and human rights lawyers over the past forty years, as well as lobbying on behalf of countless people who have reached out to Southall Black Sisters. They have advised and offered refuge to thousands of black and Asian women, people marginalised, especially in the eyes of the justice system.

Southall Black Sisters were forged in 1979 out of the clashes when the National Front wanted to march through the Asian areas around the North West of London to intimidate ethnic communities.

Pragna joined the group soon after as young graduate with a burning desire to stand up against racism and misogyny – the struggles that have dominated the group’s campaigns and led to major changes in how Britain deals with issues such as domestic violence, helping women escape forced marriages and what has been dubbed honour based violence.

Standing up for women’s rights, the group often faced anger from members of the communities they sought to defend from racism.

Sometimes they have been attacked from all sides.

With an infectious laugh and implacable sense of right and wrong Pragna, 58, recounts how the group stood up for author Salman Rushdie in 1989 when he was accused of blasphemy and faced death threats for his book The Satanic Verses.

As thousands of Muslim men marched on Westminster and a small band of Southall Black Sisters mounted a counter demonstration in support of the writer’s freedom of speech and against intolerance, the crowd rushed at the women when they saw their banners.

“We felt not this was just about his freedom of speech, but part of a wider agenda and felt women would be the next targets of this ideology of control,” explains Pragna.

“We felt it important to be there as few BME [Black and Minority Ethnicity] voices were speaking out in favour of Rushdie at the time.

“The literary establishment came out to defend freedom of speech against Muslim fundamentalists insisting his book was blasphemy. And we felt it important to show that the right to question and be critical was not just about writers being able to write, but about women’s right to question the patriarchy.”

Southall Black Sisters set up Women Against Fundamentalism, and their first protest was almost their last as thousands of Muslim protestors calling for Rushdie’s death arrived at Westminster and saw the 40 women with their banners.

“They came straight at us,” recounts Pragna and we were very lucky that the police were near and able to form a protective cordon around us.

“At the same time a fascist group who had turned up to protest against Muslims spotted us and they turned their anger against us as they saw us as an easy target. – Just as the protestors calling for the death of Rushdie saw us as more provocative because we were women. – One minute we were shouting ‘down with fundamentalism’ the next minute ‘down with fascism.’”

This isn’t the only example Pragna recounts when they had a lucky escape.

She tells how the abusive partner of a woman they helped escape turned up with a shotgun and another time the women’s centre was set on fire overnight.

But it is a powerful example of the various fronts on which the small group has fought over the years. And their victories have redefined the law in the name of equality on many fronts too.

On 4 October 2010, the law of murder in England and Wales was changed as a result of notorious cases including Kiranjit’s case.

The law of provocation was finally abolished as a partial defence in recognition of the fact that it was male-biased and outdated and used by too many men as an excuse for an act of revenge, while prejudicing physically weaker women who might wait for an abusive partner incapacitated to act out of fear of violence.

Pragna says that the small group were inundated with requests for help by women in the Asian community after Kiranjit’s high-profile victory. Many were in prison.

The defence of Zoora Shah

Not every case has been a success for the group.

Zoora Shah was one of the women who contacted Southall Black Sisters with her horrific story. Facing destitution, pregnant, with three young children when her husband left her, Zoora was ostracized by the Asian community of Bradford.

She was befriended by Mohammed Azam, who offered her and the young children accommodation. However although a married man with children, used his financial hold over Zoora to sexually enslave and pimp her.

The final straw came when she feared Azam had sexual designs on her daughters too.

Fearing he would abuse them too, traumatized by years of rape and abuse, she poisoned Azam.

At her trial in 1993, Zoora chose to remain silent about her abuse in the hope of saving the honour of her daughters who she feared would be condemned to a life of prostitution too otherwise.

Zoora was sentenced to a very high 20 year tariff for the murder of her tormentor.

“Tragically we lost the appeal,” recounts Pragna. “One of the appeal judges actually argued that she couldn’t have been fearing for their reputation as what reputation did she have as a prostitute.”

However Southall Black Sisters did not stop campaigning and they gave the dossier of evidence they compiled to the Home Secretary who eventually ordered a sentence review.

“In 2000, Lord Justice Bingham on behalf of the Home Secretary showed much more compassion than the Court of Appeal judges, and her tariff was reduced from 20 years to 12” recounts Pragna.

Given the circumstances of her case and the ignorance and arrogance displayed by the Court of Appeal in respect of race and gender issues, the reduction in tariff represented a major achievement.

Zoora Shah was finally released in 2006 and now lives with her children and grandchildren.

“Her eldest daughter was only 18 and became suddenly responsible for her young siblings when their mother was jailed,” says Pragna. “Despite having to look after all that and fight her mother’s case while dealing with a hostile community, that girl grew up to become the Labour MP for Bradford West, Naz Shah.”

Despite winning many other victories for people at the brunt of race and gender injustices, including legislation and statutory guidance on domestic violence, female genital mutilation and forced marriage, Pragna assures that Southall Black Sisters are not resting on their laurels.

In fact she warns bigger battles lie ahead.

Pragna explains how years of austerity has enabled conservative and fundamentalist factions to take hold of religion and communities.

“Conservative forms of religion have come to dominate as well as an idea of identity based on patriarchal forms and making sure women know their place within the confines of the family home. They define anything different as a transgression of religious norms and this is now a key battleground.”

Pragna cites cases of women and even a man being attacked in ethnic communities in the UK for not dressing as such new traditions dictate.

Another key battleground for Southall Black Sisters is schools.

She has also been involved in challenging faith leaders who have organized protests against schools teaching equality for gays.

Pragna says schools feel unsupported in standing up to such protests which are now spreading across the country.

“These are very chilling times ahead,” warns Pragna, describing the other challenges ahead, with the cuts to legal aid and the right to representation, austerity, the rise of the far-right and racism, as well as religious conservatism, all threatening the hard-won battles so far.

In issues many politicians might find too complex to tackle as they involve culture, faith, identity, gender and sexuality, Pragna has an unerring sense of what is right and wrong. – As well as around 4,500 people coming forward each year for advice and advocacy by Southall Black Sisters.

To find out more about the fascinating cases they have been involved in and what you can do to help: