"He means a lot to me - I can’t even explain how much. He just keeps me going, you know,” said one young fan. 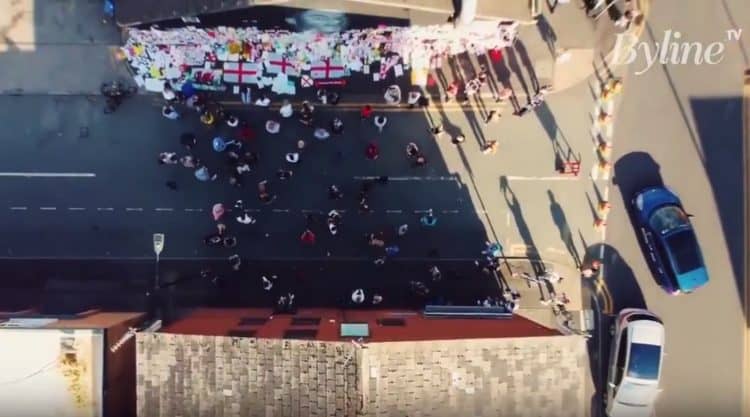 A moving video of people who gathered around Marcus Rashford’s defaced mural to share their words of affection and solidarity has gone viral.

The artwork has since been restored after hundreds flocked to cover the graffiti with heartfelt messages of support, adoration and affection in his hometown of Manchester.

Marcus Rashford, Bukayo Saka and Jadon Sancho suffered an onslaught of racist abuse online, since met with a petition calling for a ban on all racists entering football matches in England, which has amassed over one million signatures.

Please everyone retweet, so that @MarcusRashford sees it.

This is the country I want. This is what community is about. ❤️

“He just keeps me going”

One school teacher, holding an assortment of Black Lives Matter posters, described the England striker as a “hero” to his pupils:

“I’ve just brought a couple of posters that children in the class that I work in have made. I’m very pleased that the children chose to do this in their free time, so I thought I would bring them down and just make sure that they went up so that their efforts can be seen and the message can be spread,” he said

“I work in a very multicultural school and the children are very much aware of some of the issues that Marcus Rashford has highlighted, both in terms of the anti-racism campaigns, but also in terms of the school meals campaigns. So, he’s a bit of a hero to those children.”

A younger fan went onto share his admiration the footballer’s positive influence and his ability to transcend generations in the UK:

“It’s not only me he’s inspiring, he’s inspiring loads of friends, loads of fans, family as well. So, he means a lot to me – I can’t even explain how much. He just keeps me going, you know.”

Another spoke of the strength of the “counter-response” to the racist abuse:

“Everyone here is so proud of him and of everything that he’s achieved.

“The fact that the mural had graffiti on it, the fact that the response has been to just cover that up – to not promote that at all, to not share pictures of it – and instead to respond with this positivity.

“I think it’s really nice after the response to the final that there’s been this counter-response, which has been so much stronger – especially because Marcus Rashford is a local boy and it’s local people who have done it.”

“Thank you for all our dinner”

The England footballer shared a number of heartwarming notes stuck-up by fans sharing their affection for Rashford’s conduct both on and off the pitch.

Rashford, who has garnered national admiration both for his footballing prowess and campaigning for free school meals during the height of lockdown, has been flooded with messages of solidarity and love online.

One particularly striking message was left by six-year-old Reggie, which read: “Thank you for all our dinner.”