"Our England team stood up for all of us - now we must stand up for them." 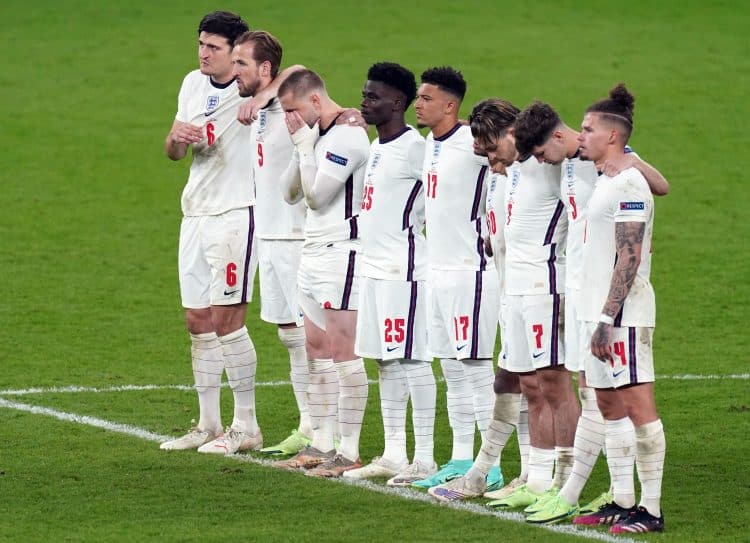 A petition calling for a ban on all racists entering football matches in England has surpassed half a million signatures.

Several players were subjected to appalling racist abuse in the aftermath of the Euro2020 final last night, with Marcus Rashford, Jadon Sancho and Bukayo Saka all having their pages flooded with xenophobic comments.

The reaction has sparked outrage among current and former players, many of whom have pointed the finger at the UK government for stoking the sentiment.

This evening Tyrone Mings hit out at home secretary Priti Patel after she called taking the knee “gesture politics”.

He said: “You don’t get to stoke the fire and then pretend to be disgusted when the very thing we’re campaigning against happens,” after she posted her outrage at the racist abuse.

A petition has since been launched calling for all racists to be banned from football matches for life.

The page, which has amassed 560,000 signatures at the time of writing, reads:

“After last night’s match, vile racist abuse was directed at our heroic players Marcus Rashford, Bukayo Saka and Jadon Sancho. Minutes after the final whistle of the Euro final, The Football Association issued a statement which said: “We could not be clearer that anyone behind such disgusting behaviour is not welcome in following the team. We will do all we can to support the players affected while urging the toughest punishments possible for anyone responsible”.

“As multi-racial football fans, we finally feel represented by this anti-racist and inclusive England team. We could not be more proud or inspired by our magnificent team and by their talent, bravery, leadership and love for all. Gareth Southgate’s England team plays for ALL of us. Their vision is an inclusive vision and this matters more than EVER – it’s why we feel proud of this team and why they’re so cherished and loved by many of us. There should be no room for racists and bigotry in football or society.

“We are calling for the Football Association and the government to work together now to ban all those who have carried out racist abuse, online or offline, from all football matches in England for life.

“Our England team stood up for all of us – now we must stand up for them.”