British officers in Kabul have described the "awful" scenes at the city's airport. 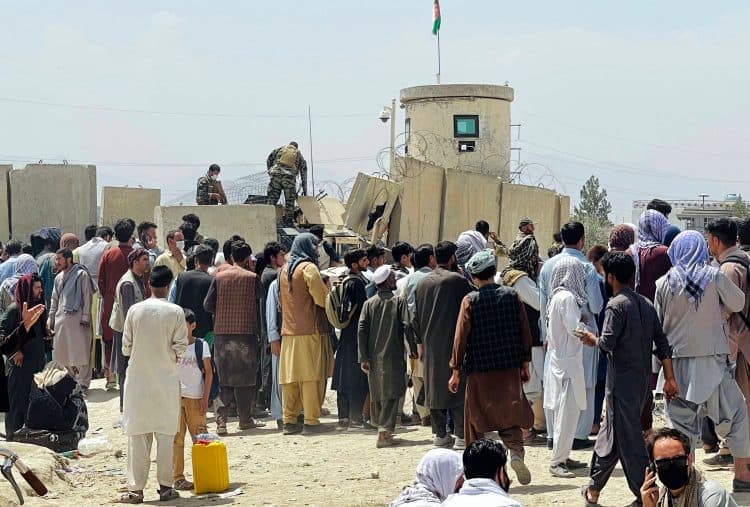 Desperate Afghan mothers have been pictured throwing their babies over barbed wire fences at Kabul airport as they seek to escape the Taliban.

Afghans and aid organisations have said that citizens are having problems getting past the Taliban and into the airport in a mass exodus triggered by the insurgents’ rapid takeover of the country and its capital on Sunday.

Officials are working to speed up the operation to get remaining UK nationals and their local allies out of Afghanistan, Britain’s ambassador to Kabul has said.

Sir Laurie Bristow said they would put “everything we can” into the mission in the coming days amid fears that time for people to leave may be running out.

But the evacuation is not accelerating quick enough for some. Heart-rending scenes from Kabul airport reveal the scale of desperation of some Afghans to flee the Taliban-controlled city.

People are so desperate to escape the #Taliban that they’re passing babies and kids forward to the gate at #Kabul airport. #kabulairport #AfghanEvac pic.twitter.com/6NSlIffrD1

Afghans hoping to reach the UK have been gathering at the entrance to the Baron hotel outside the airport, which is guarded by Parachute Regiment troops.

One officer told the Independent: “The mothers were desperate, they were getting beaten by the Taliban.

“They shouted, “save my baby” and threw the babies at us. Some of the babies fell on the barbed wire. It was awful what happened.

“By the end of the night there wasn’t one man among us who was not crying.”

Another senior military officer described the harrowing scenes to Sky News. “It was terrible,” he said. “Women were throwing their babies over the razor wire, asking the soldiers to take them, some got caught in the wire.

“I’m worried for my men, I’m counselling some, everyone cried last night.”

Boris Johnson told MPs on Wednesday that the government had so far secured the safe return of 306 UK nationals and 2,052 Afghans, with a further 2,000 Afghan applications completed and many more being processed.

While the Taliban were allowing the evacuation to continue for now, he said it was unclear how long that would remain the case.

“The situation has stabilised since the weekend but it remains precarious, and the UK officials on the ground are doing everything that they can to expedite the movement of people,” he said

“The most important thing is that we get this done in as expeditious a fashion as we can and that is what we are doing.”

The head of the armed forces, General Sir Nick Carter, said they were working with the Taliban to ensure people could leave but warned there were “a lot of challenges on the ground”.

He said he expected seven aircraft to head to Kabul, enabling another 1,000 people to leave yesterday.

He told BBC Radio 4’s Today programme: “There are a lot of desperate people trying to get to the airport, and subject to the situation remaining calm, which the Taliban are working hard to achieve alongside us, the system will work, we believe.

“At the moment we are collaborating with the Taliban on the ground, who are providing security.

“They are making sure that the centre of Kabul is very calm at the moment and so far we have not had reports of people finding it difficult to get to the airport.”