In this weekend’s German election, for the first time since World War II, a far right party looks likely to take seats in the German parliament. Founded in April 2013, the extreme right euro-sceptic Alternative for Germany (AfD) party has become a populist anti-immigrant nationalist party in recent years. Despite links to Austria’s far-right Freedom […] 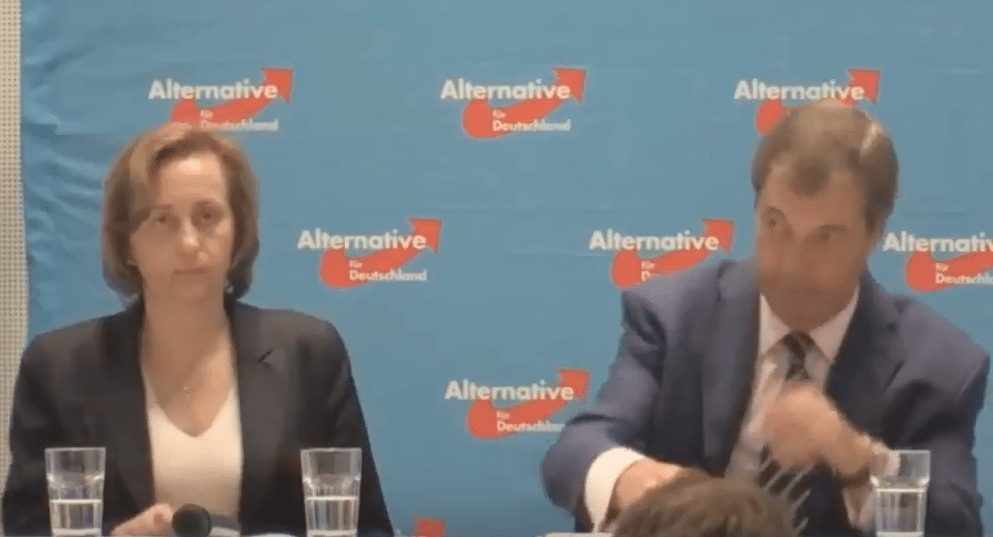 In this weekend’s German election, for the first time since World War II, a far right party looks likely to take seats in the German parliament.

Despite links to Austria’s far-right Freedom Party, the AfD performed well in state elections last year in Germany, and caused shockwaves when they beat Angela Merkel’s centre-right CDU in her home state of Mecklenburg, Western Pomerania.

In the European Parliament they belong to the same right wing bloc as Conservative MP’s.

Nigel Farage gave a rousing speech to the AfD during their campaign as anti-racism demonstrators chanted outside Berlin’s Spandau Castle. The former Ukip leader caused controversy when invited by his friend Beatrix von Storch, who leads the Berlin chapter of the AfD and is the granddaughter of the Nazis’ finance minister.

Tomorrow for the first time since 1945, an extreme right party looks likely to be in the German parliament.What do you make of the Alternative for Germany (AFD)?And what do you make of Nigel Farage’s speech at Spandau Castle – invited by granddaughter of Nazis' finance minister Beatrix von Storch, who leads the Berlin chapter of AFD – on Brexit, and the resurgence of the far right?

Posted by The London Economic on Saturday, 23 September 2017

Beatrix von Storch is no stranger to controversy herself, this month launching a bitter attack on a prominent Jewish activist, and demanding the anti-racism organization she heads is shut down for publishing criticisms of her party.

Other AfD politicians have also been involved in sinister controversies, for instance calling for defunding a memorial to the victims of the Nazis recently.

So who are the AfD and how well are they likely to do?

What does the AfD stand for?

“However in recent years it has gradually moved over to the right. And it has done the something that Ukip did very successfully on the UK – namely it has combined views on the EU with a platform on immmigration. The AfD is not proposing that Germany leave the EU, it was particularly about the euro but it has moved on from there mostly to focus on anti-immigration.”

The party took a further lurch to the right last year when its leader in Thuringia, Björn Höcke, demanded a “180-degree turn” in Germany’s policy of commemorating and atoning for its crimes in the second world war. Are such views typical?

“With extreme right wing parties there are always a lot of things thrown in. The key thing the AfD has managed to do is to capitalise on concern about immigration to Germany. It has managed to do this despite being itself a bit of a mess as parties go. There has been a protracted fight about the leadership at the top. This often happens with extremist parties.

“Various members of these parties in the regional parliaments have REALLY unpalatable views and you have all these in the AfD.

“About four years ago in the last election I was in Germany for the election and we had an information session with the AfD and they portrayed themselves as very reasonable and focussed on the economy. But you wonder what happens behind closed doors when the outsiders have gone.

“Clearly they are going to get in. – And that is a big step within Germany’s parliament because there hasn’t been an extreme right wing party in the parliament since 1945.”

How well could they do?

“If there is a another grand coalition between the CDU [Angela Merkel’s centre-right party] and the SPD [social democrats], then the AfD probably – but not definitely – will be the largest opposition. But it really is too close to call at the moment.

Are there more sinister groups are on the far right?

“There are other fringe groups on the far right, but the AfD has tended to be the most successful. The thugs if you like have tended to associate more with party called the NPD which still exists which the government has tried to have banned.

“The NPD are like the BNP and then you are linked to the thugs and the violence. The NSU were right wing terrorists  who undertook a murder spree through eastern Germany killing mainly foreigners and police officers and ended a few years back when the two main culprits below themselves up. There was one survivor whose court case is coming to an end at the moment.”

What could the AfD winning seats mean for immigrant families in Germany?

“They are not going to be in power anywhere so it won’t make any difference to immigrants directly. That said, the issue is about one of mood music and people do notice that a fairly right wing party has managed to get 10% of the votes.

“That  does not go unnoticed abroad either. It’s the kind of things that plays into the hands of people like Erdogan. There are 2 million people of Turkish origin in Germany and Erdogan has pursued a polarising strategy against Europe and in particular Germany and this will confirm everything he has said about Germany.”

Is the UK or Germany more tolerant in general?

“At the moment Germany is definitely more tolerant than UK. There is no earthly way that Britain would have taken in over million refugees. No way. But broadly, overall there are some issues but overall Germany seems to have managed and Angela Merkel has earned a lot of praise for it.

“There is a reason why Germany has taken a fairly liberal approach to asylum and refugees. That is of course because of historical reasons – because a lot of Germans relied on other countries for asylum back in the 1930s. So this commitment is quite well ingrained in the German understanding. Though of course there are many who are calling for Germany to have a limit. Germany has taken far more refugees than any other country in Europe bar none.”

Will Ukip be heartened by AfD success this weekend?

“For the past thirty years – ever since the miners’ strike – we have assumed that the economy is more important than identity but it now turns out that that is not necessarily the case.”

“In the miners’ strike, for the first time a government said we don’t care about destroying communities and for economic reasons it closed down the coal pits. It destroyed a lot of communities. In fact if you map now the Brexit vote against the parts of the country where the Brexit vote was there is quite a strong correlation, like in South Wales or Northumberland.

“We’ve always assumed the economy trump everything. And I think the Brexit vote showed us it doesn’t.”