“Another two-faced hypocrite tries to piggy back on Raducanu's victory." 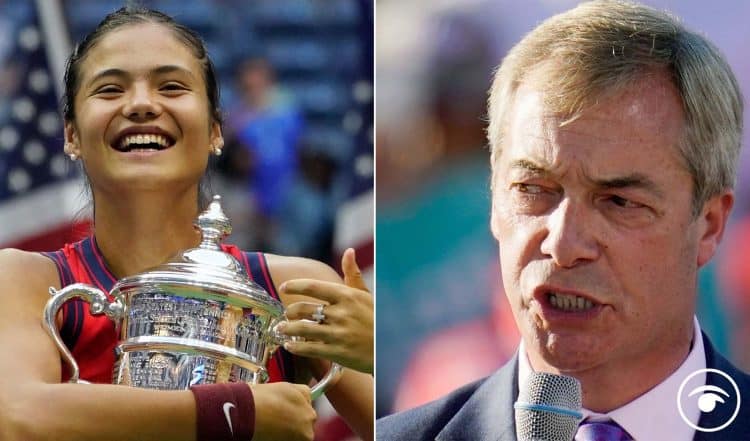 Emma Raducanu vowed to keep her free-swinging and carefree approach to tennis after pulling off one of the great sporting feats with victory at the US Open.

Winning grand slam titles is supposed to be hard – just ask Andy Murray – but his 18-year-old compatriot did not so much clear all the usual hurdles as sidestep them altogether, going home with the trophy in just her second major tournament.

That was an unprecedented feat, as was the fact she won 10 matches at the tournament after coming through qualifying, all of them in straight sets.

Raducanu’s 6-4 6-3 victory over fellow teenager Leylah Fernandez in the final made her the first British woman since Virginia Wade, who was watching from the stands, 44 years ago to win a slam singles title, and the first in New York since Wade in 1968.

Raducanu is yet to win a match on the WTA Tour and little over three months ago she was a full-time schoolgirl completing her A-levels, with competitive tennis having taken a back seat for more than a year.

Praise came in from all parts of the globe, but one person who chipped in was Nigel Farage, he tweeted: “A global megastar is born. @EmmaRaducanu winning the US Open is truly incredible.”

In response comedian, David Schneider replied: “From the man who said he wouldn’t want a Romanian as a neighbour.”

From the man who said he wouldn’t want a Romanian as a neighbour. https://t.co/97KNAz6qsT

In 2014, Farage claimed there was an obvious “difference” between living next door to Germans and Romanians.

He added: “I was asked if a group of Romanian men moved in next to you, would you be concerned? And if you lived in London, I think you would be.

“Any normal and fair-minded person would have a perfect right to be concerned if a group of Romanian people suddenly moved in next door.”

Many on Twitter did not allow Farage to forget those previous comments.

“Any normal and fair minded person would think you’re hoping we’ve forgotten your racist slur against Romanians,” another user added.

Dan Levene wrote: “On behalf of all fellow Brits of Romanian origin, the people you said you’d never want to live next door to: stick your applause up your hole.”

On behalf of all fellow Brits of Romanian origin, the people you said you'd never want to live next door to: stick your applause up your hole. https://t.co/07NiFAJRDQ

Commenting on Farage’s tribute, another user wrote: “If bandwagon jumping were an Olympic sport…”

“Another two-faced hypocrite tries to piggy back on Raducanu’s victory.

“She was born in Canada to Chinese and Romanian parents and moved to the UK aged two. She is an example of diversity and immigration and her bio represents that.