He had to wait outside his house in the rain throughout the night. 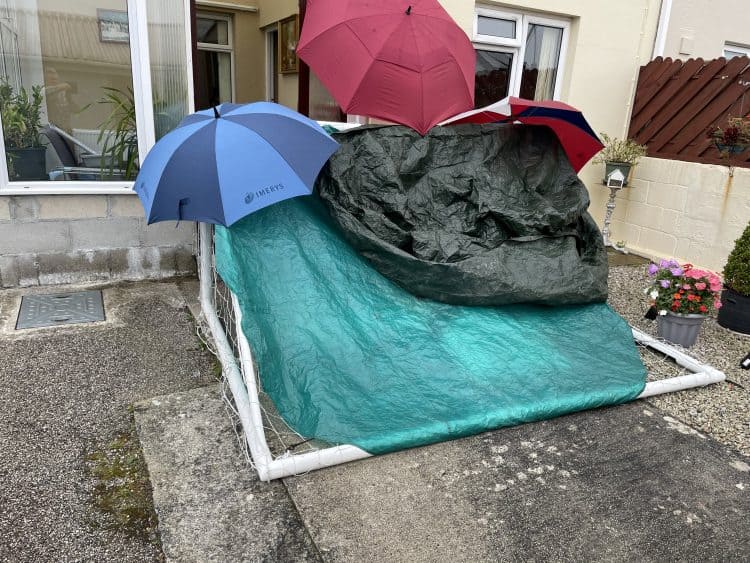 The family of an 87-year-old who fell at home were forced to build a shelter for him out of a football goal – as he waited 15 hours in the rain through the night for an ambulance.

The great-grandfather, David, took a tumble and suffered serious injuries including seven broken ribs, two fractures to his pelvis and an arm wound.

His family – daughter Karen and son-in-law Trevor – called 999 at 7.30pm on Monday – but an ambulance didn’t arrive until 11.30am on Tuesday morning.

They say they called four or five times through the night and were assured paramedics would be with them ‘soon’.

The family say operators told them not to move him – in case it made his injuries worse.

So they then had to use a football goal, umbrellas and a tarpaulin to give him shelter – as it poured down.

It comes amid lengthy waiting times for hospital treatment n Cornwall – with patients saying they have waited outside hospital in ambulances for hours and even days.

David, of St Columb Road, Cornwall, is now recovering at Royal Cornwall in Treliske. His family tweeted a picture of the makeshift shelter.

Trevor said: ”He was walking to the garage when he tripped and fell over. That was 7.30pm on Monday.

”We dialled 999 but an ambulance didn’t arrive for over 15 hours.

”We kept ringing and they would say we will be with you soon. My wife was a nervous wreck.

”They kept telling us not to move him so we borrowed a football goal from next door and used a tarpaulin. It was traumatizing.”

Cornwall Partnership NHS Foundation Trust has been approached for a comment.