But the trio deny the charge of obstructing the train. 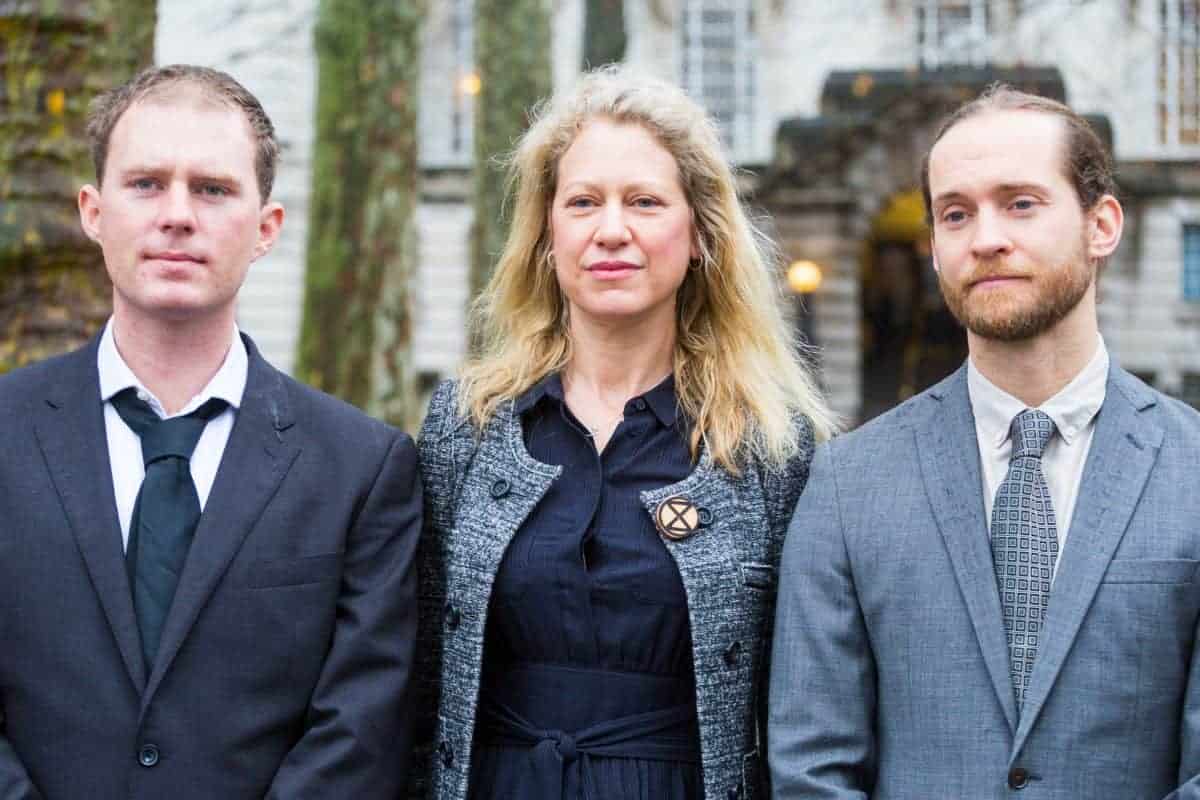 An Extinction Rebellion activist who glued herself to the roof of a Docklands Light Railway train told a court it wasn’t a crime and she was doing it to save her children.

Mark Ovland, 36, Cathy Eastburn, 51, and Luke Watson, 29, halted the DLR train and glued themselves to it on April 17 this year.

Eastburn and Ovland told Inner London Crown Court it wasn’t a protest but an alarm call to save the planet.

Mum of two Eastburn added that she was not trying to persuade people of the group’s view but saw it as her duty as a mother to act.

Ovland stuck his hand to the side of the carriage while his accomplices clambered on top and unfurled a banner which read “Climate Emergency.”

Eastburn and Watson then glued their own hands to the roof.

After two hours the trio were unstuck by police and taken to a police station where they gave no comment interviews.

Appearing at Inner London Crown Court yesterday, the group represented themselves after pleading not guilty to obstructing a train.

Taking to the stand first, Watson, of Manuden, Essex, told the jury: “I did that because I believed that doing so was the best and the only way to bring about appropriate action from the government to prevent the worst of the disasters we expect from climate change.”

His co-defendant, Eastburn, gave a charged speech to the court, telling the jury she stopped the train to save her children.

The mum of two, from Clapham, south London, said: “I do want to say that for about the last 30 years or so I have done everything I can, I’ve been aware of climate change for a long time and have pursued more conventional means or what you might call protest to get government to change policies by signing petitions.

“I’ve been on marches and supported organisations like Greenpeace and 38 degrees all with the hope we would sort things out and my children, who are teenagers, will have a future – a decent and livable future.

“Like a person in a burning building would sound the alarm and bash on doors and maybe even break something to get people to leave the building and save them – it felt very much like that to me.

“This is sounding the alarm for something that’s happening – trying to save people. Save my children, save other people’s children, nephews and nieces, young people.

“It was not trying to persuade people of a point of view. It felt like my duty as a mother and I don’t think I should be being prosecuted for that.

“I don’t think what I did was a crime – I was just trying to save my children.”

Finally, Ovland, of Keinton Mandeville, Somerset, explained: “I took action on that day because I know that for the 30 plus years people have known about this people have been trying through the usual institution channels to affect change.

“They have been voting for green policies, singing petitions, and going on marches but emission continue to rise.

“We needed to do something that was unignorable and to do it as safely as possible.

“It wasn’t a protest, if your house is on fire, if a building is on fire you don’t protest. You raise the alarm.”