"Daily Express. I don’t quite know how to tell you this, but that’s not Emma Raducanu," one person wrote. 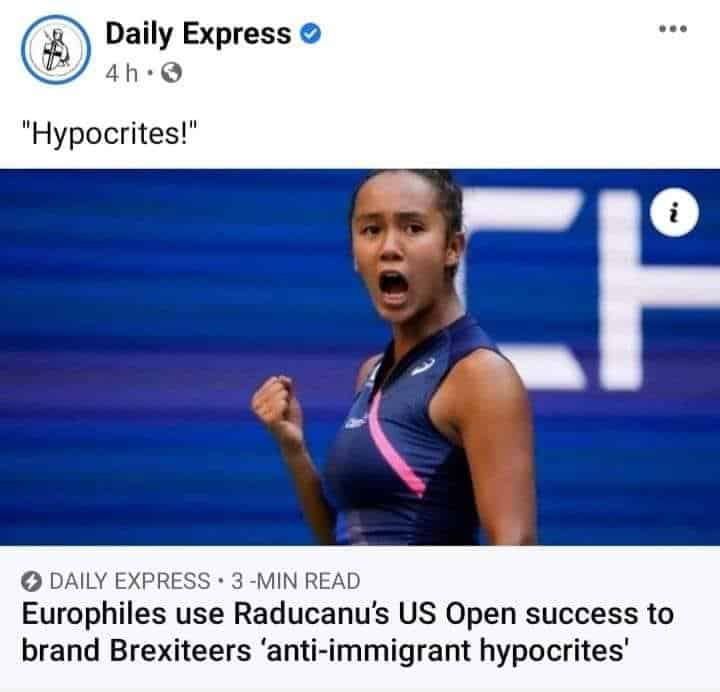 The Express was caught out in a howler this evening after confusing Emma Raducanu for her US Open final opponent Leylah Fernandez in an article hitting out at Europhile “hypocrites”.

According to the newspaper anti-Brexit campaigners have been using the astonishing success of Brit Raducanu to launch “cruel attacks” on those who voted to leave the European Union in 2016.

Raducanu was born in Toronto, Canada, in 2002 to a Romanian father and Chinese mother. The family emigrated to the UK when she was two to settle in Bromley, southeast London.

Remainers have used this as ammunition to bash ‘anti-immigrant hypocrites’, the paper claims, with one person pointing out that it is “intriguing to see the flag-waving Brexit Brits suddenly embrace immigrants when it suits them….”

The Express fought back on behalf of Brexit supporters, pointing out that Romania had not joined the EU when Raducanu’s family migrated and that “neither China nor Canada have ever been members.”

But the article quickly backfired when social media users pointed out they had used a picture ofLeylah Fernandez rather than Raducanu to illustrate the piece, much to the bemusement of those online.

Daily Express. I don’t quite know how to tell you this, but that’s not Emma Raducanu. pic.twitter.com/AxkmuZrzJv

They're right to – that's an image that isn't Emma Raducanu.

Well done for playing up to rightful stereotypes, as ever, Daily Express. pic.twitter.com/WUNk9PAqTD

Daily Express article about Emma Raducanu leads, instead, with an image of Leylah Fernandez 🤦‍♀️🙄 pic.twitter.com/WJfvsxk1OT

Daily Express can't tell the difference between Emma Raducanu and Leylah Fernández. But how dare people, rightly, point out that without immigration she wouldn't be representing GB. 👍 https://t.co/VOmlfD9ku0