"Confiscate the dogs and a big fine for the “tally-ho I can do what I want because I’m rich” brigade." 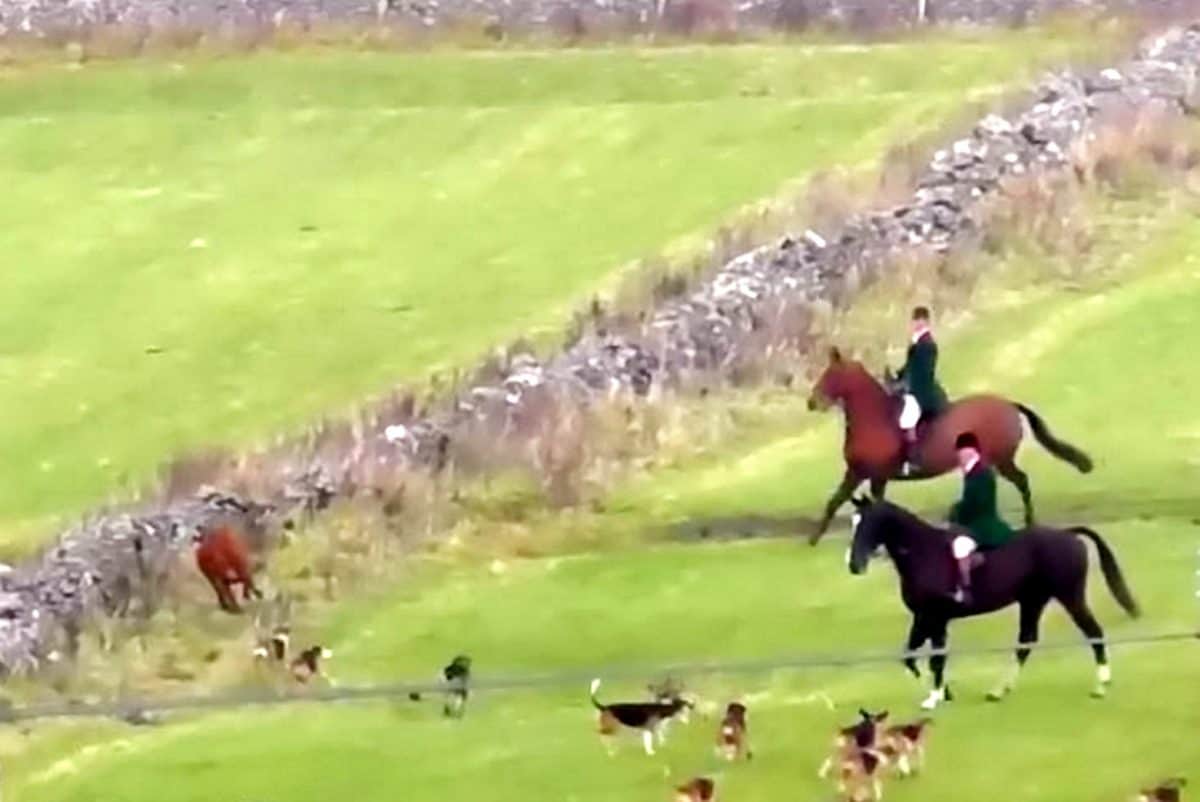 Shocking footage shows a terrified calf “running for its life” and jumping over walls while being chased through a farmer’s field by a pack of crazed hunt hounds.

Nottingham Hunt Saboteurs filmed the young cow being swarmed by dogs after they burst onto a farmer’s field near Broxtowe, Notts., on Wednesday (4/11).

It can be seen narrowly avoiding the chasing pack of snarling hounds from the High Peak Hunt as it hurdles drystone walls designed to keep livestock in the field.

An animal rights activist filming the footage can be heard gasping and saying: “Oh my God, look at this calf running for its life.

“They are actually chasing a calf through a field. Are they on something and the calf is just running or are they actually in cry after the calf?”

Nottingham Hunt Saboteurs said they intended to forward the footage on to police and the RSCPA to see if any legal action can now be taken.

A spokesperson said: “We’ve never seen anything like this and we’ve been doing it for a long time, they just burst into the field and starting chasing the calf.

“There have been quite a few hunts scrambling to get them in before lockdown so we knew they would be in the area.

“This particular one hunts hares and foxes and I have no doubt they were looking for hares, there’s no way they would lay a fox trail so close to livestock.

“You can see them swarming around this poor calf. It is running for its life and terrified because there’s no way they would usually clear three drystone walls.

“Those walls are designed to keep them in, so it was going to drastic measures to get away. Its mum had bolted as well and must have feared for her young.

“It just shows how frightened this poor creature must have been and God knows what would have happened if they caught it as they can do a lot of damage.

“The farmers give permission to these hunts for them to be on their land but when this farmer sees this video I’m sure he’s going to be displeased to say the least.

“We were disgusted that they are allowed to get away with this. They come very close to getting him at so point, so it was very lucky to escape unscathed.

“We’re planning on contacting the RSPCA and the police to see if they can do anything as this clearly isn’t right.

“But I suspect it might be a private matter between the hunt and the landowner as the hounds didn’t actually catch the calf.

“I don’t think that calf would be alive if they had. It did very well to get away.”

The hunt saboteurs also posted the clip on Facebook and wrote: “On Wednesday, Hounds of the High Peak Hunt were recorded chasing a calf through several fields and forcing it to jump over dry stone walls in fear for its life.

Jerry Oliver replied: “Can there be a better illustration of how deeply stupid and cruel this activity is!”

Paola Jean-marain added: “This has to be stopped , farmers constantly put warning signs to keep dogs on leads and then this is ok ? This is why these scum bags believe they are above the law”

Lesley Gately wrote: “Confiscate the dogs and a big fine for the “tally-ho I can do what I want because I’m rich” brigade.”