Houses were left under water and roads were blocked as heavy rain fell last night, leaving villages cut off and people stranded 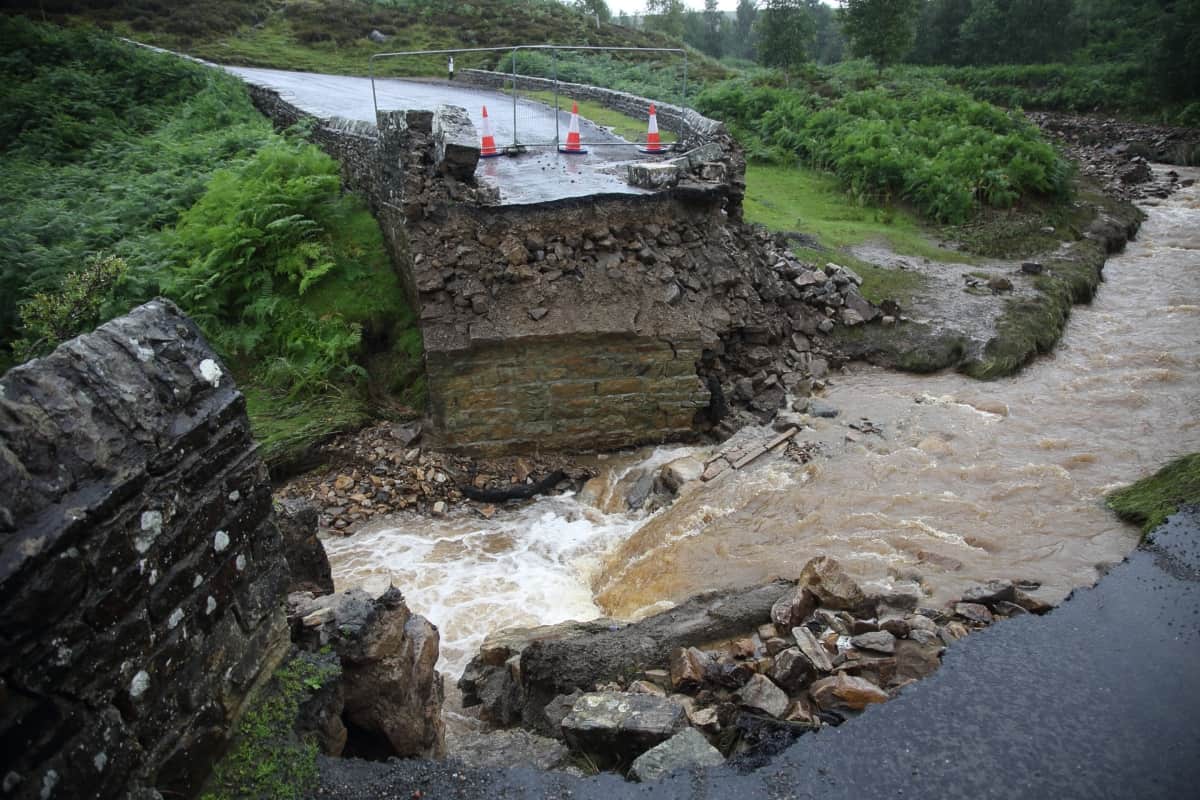 Flash flooding has caused a bridge to collapse in North Yorkshire after a month’s rain fell in just four hours.

Houses were left under water and roads were blocked as heavy rain fell on Tuesday, leaving villages cut off and people stranded.

A bridge in the village of Grinton collapsed under the strain of the downpour and roads were left impassable after the deluge.

The main road between Grinton and Leyburn was shut after more than 3.2inches of rain fell in the Yorkshire Dales.

The monthly average in the area for this time of year is 3.5inches.

North Yorkshire Fire and Rescue service said it was called out to more than 100 calls in the area.

The fire station is Leyburn was also flooded as crews battled to help people stranded in houses and cars stuck in water.

A spokesman for the service said: “North Yorkshire Fire and Rescue Service received approximately 115 calls to flooding incidents in Leyburn and Reeth on the evening of 30th July.

“We had several appliances, as well as our swift water rescue teams and high volume pumping appliance within the area attending various incidents involving flooded properties and cars stuck in flood water.”

He said: “We deployed our members and boats. It was pretty much a rolling incident and we attended around six separate incidents.

“People were trapped upstairs in flooded houses and we provided welfare checks on them, then our colleagues from the fire and rescue service evacuated them.

“Businesses in the area will be affected by a loss of visitors. It is the busiest time of the year for tourism and businesses that rely on visitors will lose out because the villages have been cut off.”

A mountain bike festival due to be held this weekend near Reeth in Swaledale has been cancelled due to the floods.

In a post on Facebook, the event team said: “We are heartbroken to tell you that the 2019 Ard Rock enduro is cancelled.

“Right now we are doing everything in our power to ensure our team on the ground is safe, and we can support all those who need help.

“The rainfall and situation is unprecedented in this area. Access to the area is blocked by emergency services from all roads. Please do not travel.”

The environment agency said a flood warning remained in place this morning and some routes remain shut.

More rain is expected as the Met Office has issued a yellow warning for rain for much of the north of England.

The Met Office said: “Rain will be persistent and heavy in places across parts of central, northern and eastern England and northeast Wales at first on Wednesday.

“During the day rain may turn more showery in places but with a higher chance of thunderstorms by afternoon.

“Some parts of northern England could see as much as 40-60 mm of rain through Wednesday, while thunderstorms could produce as much as 30-40 mm in 1-2 hours.”