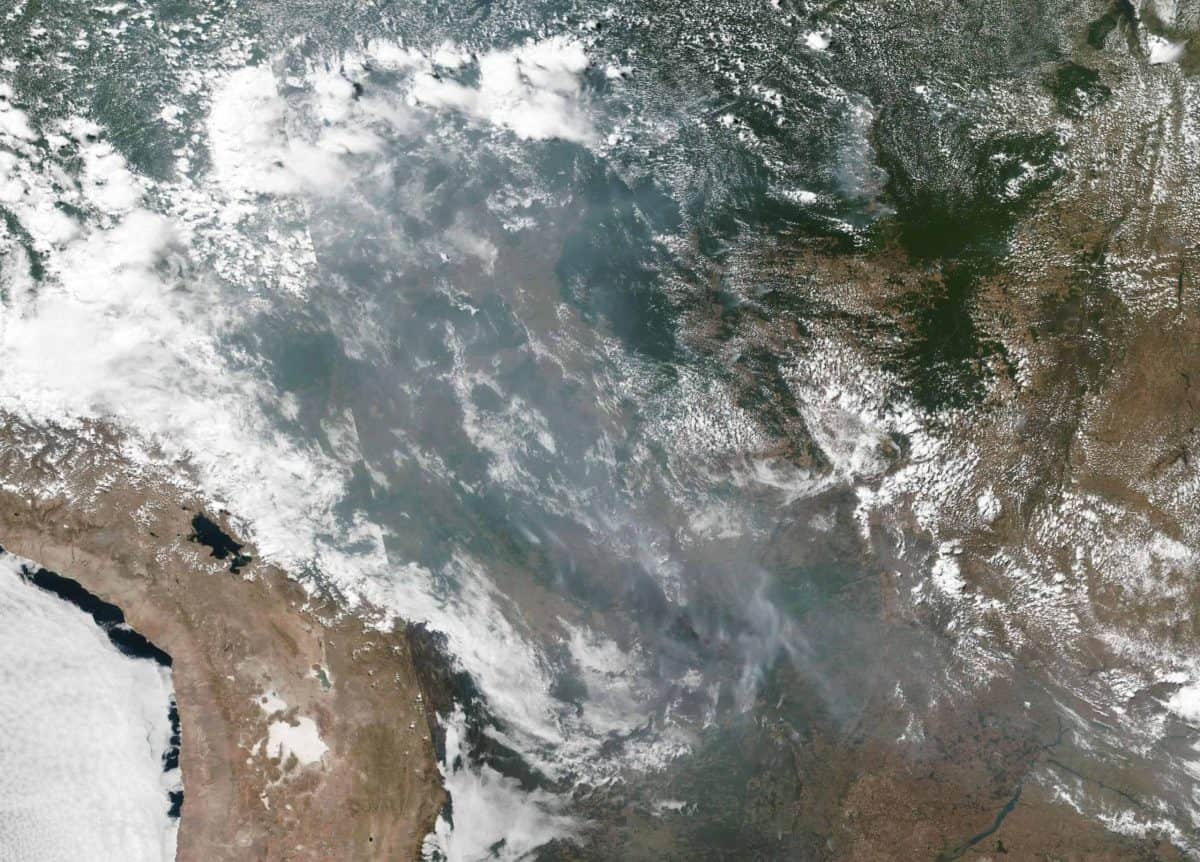 This satellite image provided by NASA shows the fires in Brazil on Aug. 20, 2019. As fires raged in the Amazon rainforest, the Brazilian government on Thursday denounced international critics who say President Jair Bolsonaro is not doing. (NASA via AP)

The Brazilian government has accused European countries of exaggerating the danger from the fires in order to destabilise the country.

As global concerns rise over raging fires in the Amazon, Brazil’s government has complained that it is being targeted in smear campaign by critics who contend President Jair Bolsonaro is not doing enough to curb widespread deforestation.

Mr Macron tweeted: “Our house is burning. Literally. The Amazon rain forest – the lungs which produces 20% of our planet’s oxygen – is on fire.”

Mr Bolsonaro fired back with his own tweet, writing: “I regret that Macron seeks to make personal political gains in an internal matter for Brazil and other Amazonian countries. The sensationalist tone he used does nothing to solve the problem.”

Onyx Lorenzoni, the Brazilian president’s chief of staff, had earlier accused European countries of exaggerating environmental problems in Brazil in order to disrupt its commercial interests.

“There is deforestation in Brazil, yes, but not at the rate and level that they say,” said Mr Lorenzoni, according to the website globo.com.

Professor Alexandre Antonelli, Director of Science at the Royal Botanic Gardens, Kew says: “The Amazon is the most biodiverse forest on Earth. The alarmingly high number of human-triggered fires happening right now in the southern deforestation zone is releasing vast quantities of greenhouse gases into the atmosphere and posing a severe threat to thousands of plant and animal species. Most of these have inhabited the region for hundreds of thousands of years, and many could contain important properties for our societies – such as cures for yet untreatable diseases.

There will be far-reaching effects on the region’s ecosystem, likely leading to the conversion of rainforest into land for the production of soya and meat. This is a matter of deep concern for all people, but as a Brazilian citizen I feel particularly troubled. The so-far unsubstantiated allegations that these fires are being caused by NGOs – whose crucial work in conservation cannot be understated – provide nothing but a distraction from factual evidence.

Immediate action is necessary to extinguish the current fires and prevent future ones. And unfortunately, these fires are just another a series of events leading to increased deforestation – including increased illegal and legal logging and armed conflicts with indigenous communities.

The world’s leaders, industry, and all of us must do all we can to stop this tragedy. Import sanctions of Brazilian produce to decrease demand, consumer boycotts, and soft power provide perfectly legal and demonstrably powerful tools to trigger change.”