The Deepwater Horizon disaster turned into one of the biggest environmental tragedies in history – because of the sun, suggests new research. Dispersants used to clean up major oil spills are almost a third less effective in sunlit waters – such as those in the Gulf of Mexico, according to the study. Researchers found that […] 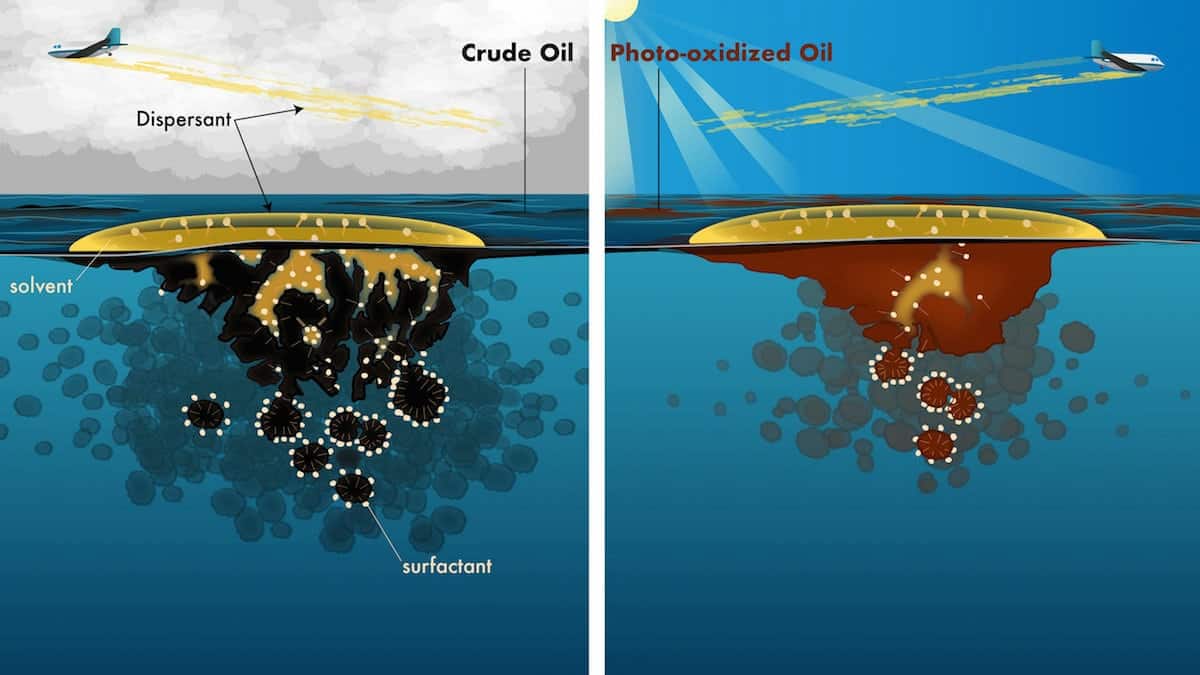 The Deepwater Horizon disaster turned into one of the biggest environmental tragedies in history – because of the sun, suggests new research.

Dispersants used to clean up major oil spills are almost a third less effective in sunlit waters – such as those in the Gulf of Mexico, according to the study.

Researchers found that crude oil floating on the surface is chemically altered within days – or even hours.

Dr Collin Ward, of Woods Hole Oceanographic Institution in the US, said: “It has been thought sunlight has a negligible impact on the effectiveness of dispersants.

“Our findings show sunlight is a primary factor controlling how well dispersants perform.

“And because photochemical changes happen fast they limit the window of opportunity to apply dispersants effectively.”

Before dispersants can even be applied light energy from the sun is already breaking chemical bonds in oil – creating openings for oxygen to attach.

This ‘photo-oxidation’ – also known as photochemical weathering – is similar to the process that causes paint on your car or colours on your clothes to fade if they are left out in the sun for too long.

Now two new studies led by Dr Ward have shown this happens much more significantly and quickly than previously feared – increasing the amount of oil that reaches coastlines.

The findings, published in the journal Environmental Science and Technology, could change how responders decide to use dispersants.

They could factor in sunlight in determining the “window of opportunity”. This would be far shorter on sunny days than on cloudy ones.

In a series of unique experiments Dr Ward and colleagues tested samples of Deepwater Horizon oil that was skimmed almost immediately after it surfaced.

The tragedy in 2010 killed eleven crew and was the worst environmental disaster in US history.

It left oil floating on the sea for 102 days – which gave officials a chance to collect it as soon as it was exposed.

The longer it floated the more the oil was photo-oxidised. The researchers estimated half of the spilled oil had been altered within days.

In the 1970s scientists had shown light alters the chemistry of oil – but the findings could not be applied to large-scale spills in the ocean because it quickly flowed away from the scene.

This was not the case at Deepwater Horizon. Using state-of-the-art glassware the researchers showed light rapidly photo-oxidised fresh oil that had been collected directly from the broken riser pipe on the seafloor.

This changed it into compounds that slashed the dispersants’ success by at least 30 percent in a few days.

Then in weather simulations – including a range of wind speeds and sunlight levels – they superimposed all the 412 actual flight lines of planes that sprayed dispersants during the crisis.

The results showed under average conditions most would not have achieved minimum effectiveness levels designated by the EPA (Environmental ) Protection Agency – because they targeted photochemically weathered oil.

Dozens of the applications would even have failed under clouds – which would limit photochemical weathering – and high-winds conditions which would transport oil farther from the spill area before sunlight transformed it.

Dispersants contain detergents similar to washing up liquid which help break oil into small droplets that can become diluted or eaten by microbes before being swept to sensitive coastlines.

For the first time the researchers showed sunlight rapidly transforms oil into residues that are only partially soluble in the dispersant’s solvent that helps oil and water to mix.

Dr Ward said: “This study challenges the paradigm that photochemical weathering has a negligible impact on the effectiveness of aerial dispersants applied in response to oil spills.

“So photochemical weathering is a critical factor that should be considered to optimise decisions on when to use dispersants.”

It is estimated to have killed up to 102,000 birds across 93 species, more than 6,000 sea turtles and almost 26,000 marine mammals including dolphins and whales. BP admitted criminal charges and agreed to pay a £2.8 billion fine.