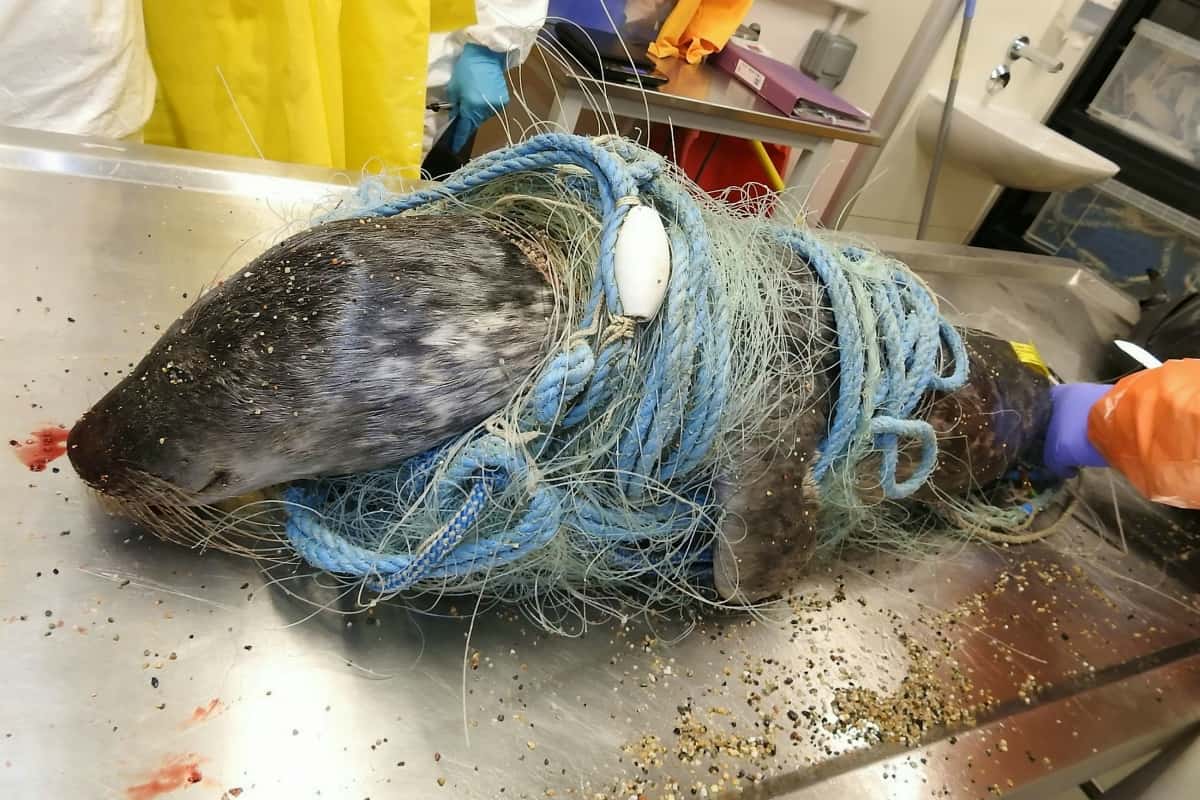 A shocking picture of a dead dolphin wrapped in discarded fishing nets has been released as part of a campaign.

James Barnett, 57, is a marine vet and says that the biggest threat to marine life is discarded fishing nets, known as ghost nets.

He said that while plastic does pose a threat to marine life, he sees animals wrapped in ghost nets far more often.

Now, James has released this image of a common dolphin that was washed up in Cornwall in 2017, completely wrapped from snout to flipper in netting.

James works at the Cornish Seal Sanctuary in Gweek, Cornwall, and has been treating injured marine animals since the early 90s.

Over the years, he has carried out hundreds of post-mortem examinations on dolphins, seals and other animals found dead on our beaches.

He said: “We don’t know how big a problem microplastic is yet. Microplastics is a totally unknown quantity.

“We are not yet able to determine how badly it is impacting the animals’ health. I think it is something further studies over the coming years will be able to say.”

“Seals are very curious animals and they will investigate nets floating in the water or attached to the seabed and can get entangled in them.”

Ghost nets, the discarded or lost nets floating in the water, are a huge problem for seals and Mr Barnett said he sees serious cases of entanglement every year.

The cut marks found on the bodies of marine mammals are often the telltale signs that an injured animal has become entangled.

Last year, James autopsied nearly 30 cetaceans which had been found stranded on beaches and around a quarter of them were victims of bycatch.

He said: “We have not found much evidence of plastic in seals. The biggest killers are probably bycatch and entanglement.”

In May, a seal was found washed ashore near Boscastle, entangled in 35kg of nets.

At the time volunteers from local rescue group British Divers Marine Life Rescue said it was clear the seal had endured a horrific death.

“It’s definitely the worst case of animal entanglement I have seen in my career,” said Mr Barnett.

Throughout his career, James he has carried out 225 necropsies on cetaceans of 11 different species, 78 seals and one basking shark, the first of its kind in the UK.

“It’s a passion,” he said. “My work helps highlight the issue around bycatch, entanglement and marine plastic and pollution. It makes my life more real and meaningful.”