Scientists dropped onto the floes by helicopters and dinghies - and collected samples. It shows air pollution is more widespread than previously feared, they say. 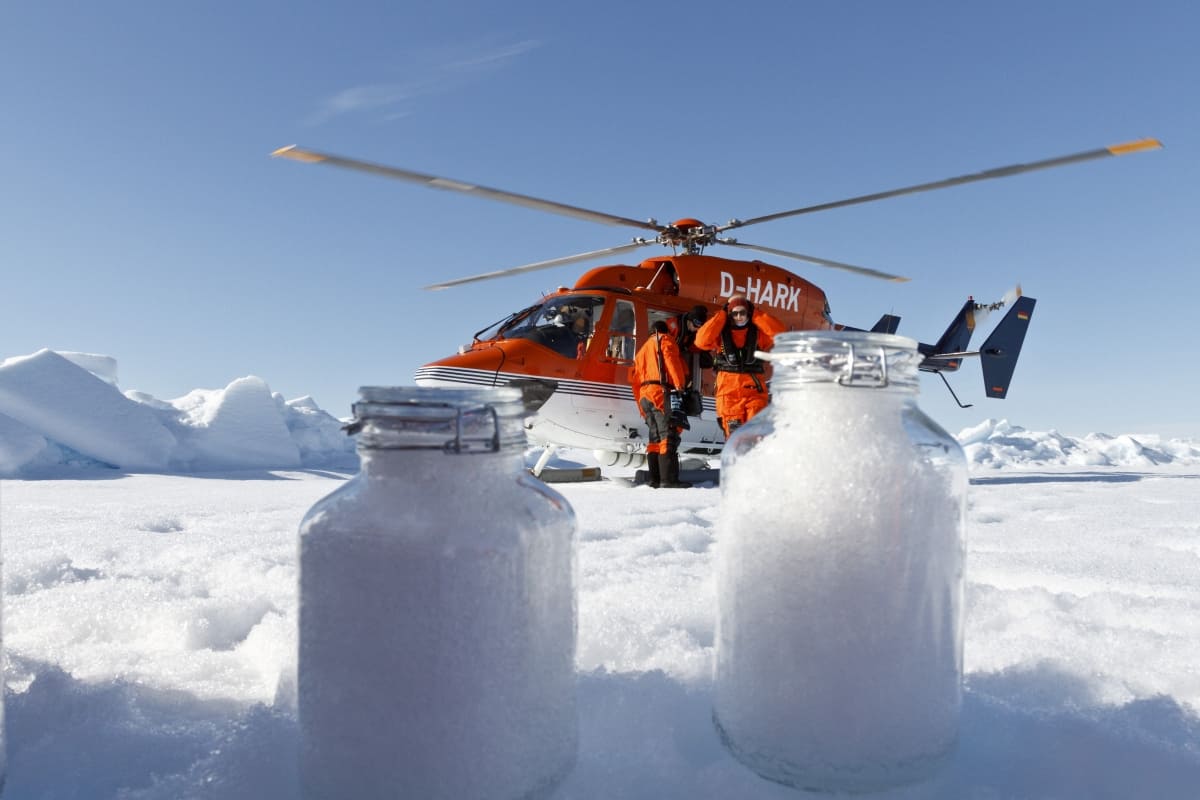 Microplastics from bottles and food packaging have been discovered in pristine snow on sheets of ice… floating in the Arctic.

Scientists dropped onto the floes by helicopters and dinghies and collected samples. It shows air pollution is more widespread than previously feared, they say.

The tiny particles are being blown into the most remote places on Earth – where ecosystems are already being harmed by climate change.

They pose a potential threat to the health of marine life – and ultimately human beings.

Most were in the smallest measurable size range of less than 11 micrometres that are more likely to be picked up by the wind, a study found.

Lead author Dr Melanie Bergmann said: “The Arctic is still widely conceived as one of the last pristine environments on the globe.

“Microplastics and microfibres were found in all but one snow sample – 20 out of 21.”

The shreds are less than 5 millimetres long and may also contain varnish, rubber or chemicals used in synthetic fabrics.

Dr Bergmann, of the Alfred Wegener Institute, Helmholtz Centre for Polar and Marine Research in Bremerhaven, Germany, said: “This study provides the first data on contamination of snow by microplastics.

“Microplastic concentrations in snow were very high, indicating significant contamination of the atmosphere.

“During its passage through the atmosphere, snow binds airborne particles and pollutants, which are eventually deposited on Earth’s surfaces, a phenomenon termed ‘scavenging’.

“Our data show scavenging represents an important pathway of microplastics to land and ocean environments in Europe and the Arctic.”

Large quantities were found in snow from disparate regions – suggesting they are causing significant air pollution.

The study published in Science Advances sheds light for the first time on how they travel so far.

Dr Bergmann and colleagues scanned samples collected between 2015 and 2017 from the Fram Strait, a passage that stretches from Greenland and Svalbard to the Arctic Ocean.

They visited five ice floes by ship-based helicopters or dinghies during three expeditions and compared them with snow taken from the Swiss Alps and the busy bavarian city of Bremen.

Although plastic concentrations in Arctic snow were lower the levels of the pollutant were “still substantial, said Dr Bergmann.

She said: “Microplastics are ubiquitous, and considerable quantities prevail even in the Arctic; however, there are large knowledge gaps regarding pathways to the North.”

The composition varied strongly but polyethylene and polyamide – used in plastic bottles and food packaging, respectively, dominated overall – along with rubber and varnish.

Dr Bergmann said: “Most particles were in the smallest size range indicating large numbers of particles below the detection limit of 11 micrometres.

“Our data highlight that atmospheric transport (wind) and deposition can be notable pathways for microplastics meriting more research.”

Plastic production has increased to 380 million metric tons (MT) a year with annual waste projected to rise to 3.4 billion MT in the next three decades.

Dr Bergmann said: “Many countries still have inefficient waste management and water treatment systems allowing leakage to the environment, which is exacerbated by littering behaviour.”

Dr Bergmann said: “In addition, plastic is designed to be durable. Therefore, it persists in the environment for long periods of time.

“Thus, it is hardly unexpected that plastic pollutants are ubiquitous and have been reported from environments close to urban centres, terrestrial areas, and freshwater environments, as well as from the shores of remote uninhabited islands, the sea surface, water column, and deep seafloor.

Most studies currently focus on particles larger than 200 or 300 micrometres. Measuring smaller ones helps realistically assess their environmental toll.

Added Dr Bergmann: “The high amounts of microplastics in snow, as reported here, suggest atmospheric transport and deposition could represent a significant pathway for these materials to places far afield.”

As snow melts with climate change the plastic will be released back into the water – with unknown effects on wildlife. They can be eaten by filter-feeding animals and passed up the food chain.

A considerable amount of microplastic is released directly into the ocean by the gradual breakdown of larger pieces of plastic.

But microplastics can also enter the sea from health and beauty products, washing synthetic textiles or abrasion of car tyres.

Microplastics found in water, food and air the equivalent of eating a “credit card a week” click here