They don’t want a house, a mortgage, a car, things. All they want is their future, their planet. And all they have to offer in return? Only ideas, energy, respect, innocence, purity, originality, love and joy. 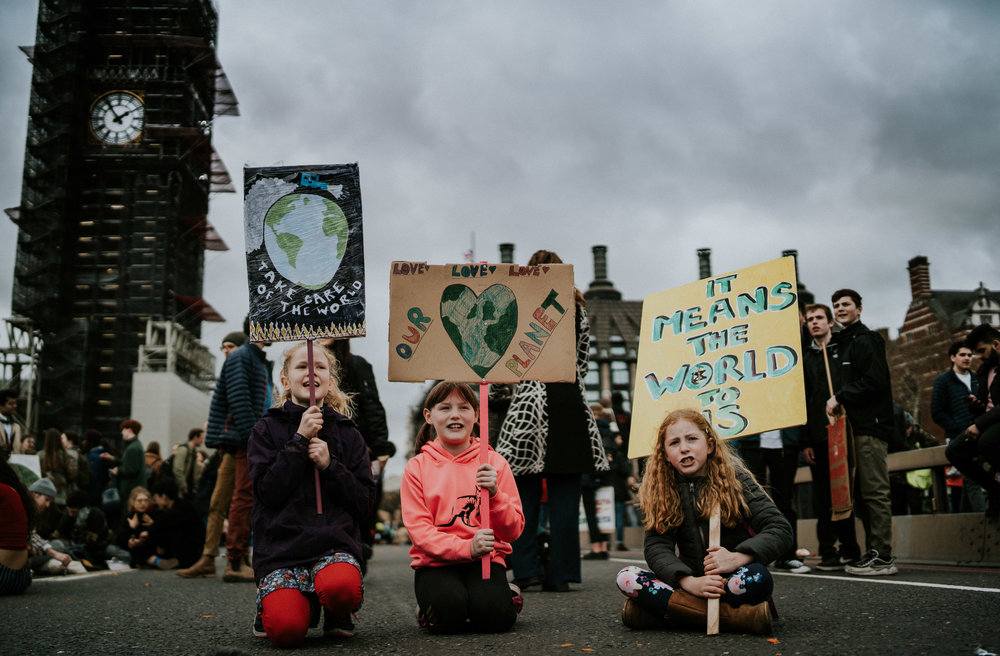 In the long run, how can they lose?

Photographer Adam Rowley shares his thoughts and photos from today’s Youth Strike For Climate in over 100 countries around the world:

Parliament Square.  The air bristles with energy, a static crackle of expectancy. In the shadow of scaffold-clad Big Ben, smoke drifts in the air.  Music pounds and voices cry out. The sun slyly winks from behind the bent black back of Winston Churchill’s stature. This is a very different kind of war footing.  This, my friend is the young, and they have had enough.

But unlike the jostle and shove, the sharp-elbowed hostility of the not-young, those here are full of joy, life, camaraderie, enthusiasm.  Their friendliness is laced with  dynamism, optimism.  They are joy and hope personified. It is the second UK-wide Youth Strike 4 Climate and they are not taking the adult world sitting down, unless to do so means stopping traffic on Westminster Bridge.

Meanwhile, inside of Westminster, in a dark, cobwebby corner, the spider lady stirs, her face lined and haggard, joy-free, a road-map of hatred.  A Miss Haversham of dogma and division.   Presumably somewhere else in this dark, wood-panelled cave of greed and spite some cabal or other of aged crones are debating which piece of arcane procedure to vote for today to distract and disorient the dull-eyed and apathetic electorate.   Today’s business is the same as yesterday’s business, extract a little more silver out of sterling hikes.  Vote this way sterling will drop, vote that way it will bump up.  The outcome matters not, beyond the acquisition of just a little more money at the expense of the poor. Call it Austerity. Call it Brexit. Call it Croneyism and Plutocracy. Call it the sham musical-hall-without-the-laughs bad theatre of fake democracy. Meanwhile, Rome burns.

Back outside, the sun hides shamefully behind a grey cloud, but the mood is defiantly euphoric.  From a tannoy, young voices demand the nationalisation of banks, the introduction of a carbon tax, a dismantling of the system.  They are not hamstrung by pre-knowledge, by so-called experience, by the great weight of cluster and clutter that is the empty nodding wisdom of the late-stage capitalist. They are not skeptical or jaded. They are not hidebound by rules and laws and theories and practice. They are young, you see. They haven’t yet been sucked into the world of “well you see that can’t work”, of “well greed will always out”, of “twas ever thus”. They havent yet been drawn into the spider’s lair. They demand out with the old. They demand a future.  They dance and smile and applaud each other.  Their innocence and verve is totally captivating.  You could get drunk on it.  You could forget there is no sunshine, no hope for the planet. How could a future fail, with these young people at the helm? They are life itself.

In her crepuscular corner, the Spider Lady stirs and snarls and stretches out her skeletal talon and whispers:  “Beware child, what we need is three percent economic growth,  not ideals.  You can eat money, you see”

UK Economic growth though, has been finessed down to nothing. There is no growth, and everyone knows it. Yet still the Spider Lady and her cabal grow richer.  It is, as always,  the very poor and vulnerable who pay the price, who are on the receiving end of zero percent economic growth, who are left wanting while the Spider Lady grows richer, wants for nothing.  Except maybe empathy, joy, humanity, a future for the young. A planet for them to live on. Sustainable life. Oxygen.

Out here, the air smells bright, fresh, clean, invigorating. The young, you see, they still have so much life in them, so much to give, so much living to do. They haven’t yet learned the indifferent casualty of sharp elbows and invasion of personal space, of greed is good.  They haven’t been poisoned by cynicism and consumerism, by the daily march of the dead to pay off mortgage and debt. They are eager, they are angry, and they are in the right.

And so – what about this future prosperity, this glittering career, this gilded path to wealth. Well they simply don’t want it.

They don’t want a house, a mortgage, a car, things. All they want is their future, their planet.  And all they have to offer in return?  Only ideas, energy, respect, innocence, purity, originality, love and joy.

In the long run, how can they lose?