Greenpeace activists have boarded a 24,000-tonne ship carrying Volkswagen diesel cars to the UK – and say they won’t leave until the vehicles are returned to Germany. The campaigners used kayaks and boats to approach the boat in the Thames Estuary, before climbing on-board at 8.30am this morning. They were hanging from a 27-metre unloading […] 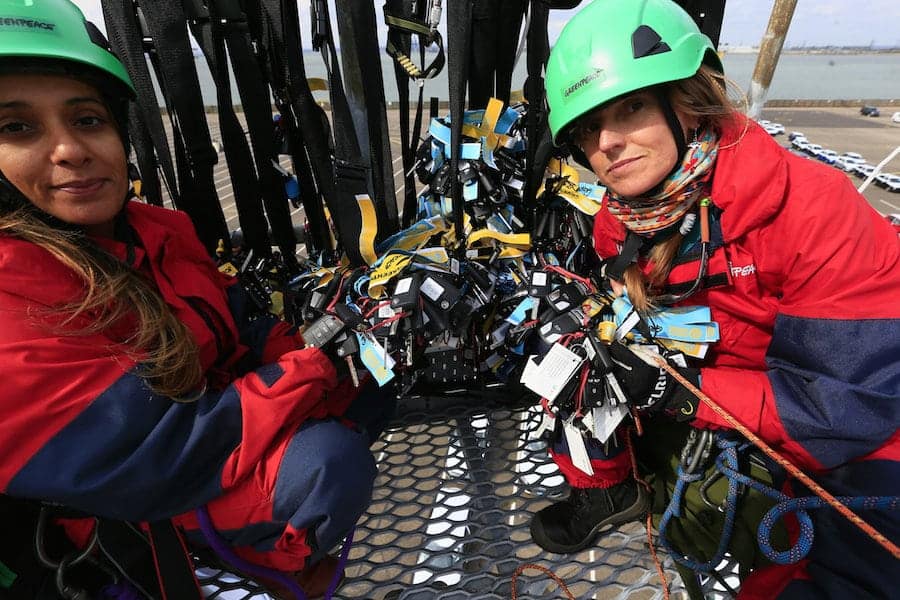 Greenpeace activists have boarded a 24,000-tonne ship carrying Volkswagen diesel cars to the UK – and say they won’t leave until the vehicles are returned to Germany.

The campaigners used kayaks and boats to approach the boat in the Thames Estuary, before climbing on-board at 8.30am this morning.

They were hanging from a 27-metre unloading door while 40 other volunteers stormed a dockyard in Kent where several thousand Volkswagen vehicles are being held.

The manufacturer came under fire in 2015 when it was revealed it installed software in some cars to cheat emissions tests.

Last week we revealed how ‘Dieselgate’ probably led to the deaths of 210 Brits.

Activist Janet Barker, a support worker from Wales, said: “Diesel cars are toxic – so we’re here to block VW imports on behalf of all of the children who are the most acutely affected by the health impacts of diesel fumes.

The other volunteers at Sheerness Docks in Kent, where the ship’s vehicles are headed, are attempting to immobilise the VW diesel cars already there by removing the keys.

They are also lifting the bonnets and labelling the engines with messages calling on VW to ditch diesel.

Campaigners have also hung a 50 square metre banner on the ship’s unloading ramp showing the face of a two-year-old girl, called Sephie, covered by an air pollution mask.

“Given the scale of the air pollution problem in London, it’s sadly predictable that we’re seeing so many children across the capital, like Sephie, suffering from respiratory problems.