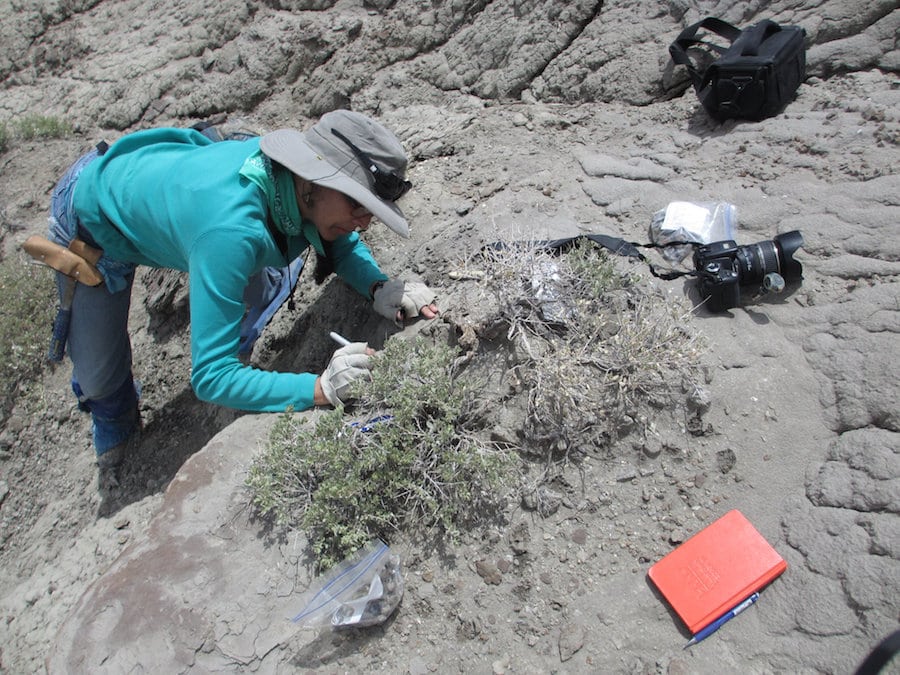 Giant plant eating dinosaurs were snacking on shellfish 75 million years ago – as a side dish, according to new research.

Eating foods rich in protein and calcium was probably a seasonal behaviour that boosted the huge beasts’ reproduction.

The remarkable discovery adds to growing evidence dinosaurs really did evolve into modern birds – as they do the same.

Scientists say it changes our simplistic view of feeding habits of the crustacean chowing ‘megaherbivores’ – because they adjusted their diet to fit the conditions.

Professor Karen Chin, of the University of Colorado at Boulder, said: “From what we know about dinosaurs, this was a totally unexpected behaviour.

“It was such a surprising discovery we wondered what the motivation could have been.”

She said the consumption was almost certainly intentional because crustacean shells turned up in at least ten samples of dinosaur dung, known as coprolites.

The samples in were also in three different rock layers layers of the desert wilderness of Grand Staircase-Escalante National Monument, sttecthing across about 13 miles.

The vast tract of land is one of the country’s last great, largely unexplored dinosaur graveyards.

At the time the area was a sub tropical, swampy environment dubbed the “lost continent” of Laramidia.

It was formed when a shallow sea flooded part of what is now North America and divided the continent in two.

Professor Chin said the poo fossils date back to this time, during the Late Cretaceous, and were similar in size to ones she has examined from Montana.

These were also believed to have come from the duck-billed hadrosaurs, which grew up to 30ft long and weighed up to 3 tons. Both sets held jumbled fragments of rotting wood.

But a closer inspection of the latest dung specimens also turned up thick bits and pieces of fossilised shell – suggesting crustaceans were living in the decaying, coniferous wood, Prof Chin explained.

She thinks their ingestion was deliberate and would have provided valuable sources of protein and calcium.

Examples of modern crustaceans which have hard exoskeletons include lobsters, crab, shrimp and crayfish.

The study published in cientific Reports found some of the coprolites were probably around two gallons in volume – showing they must havebeen left by very large dinosaurs.

The size of the crustacean pieces indicate the shellfish were at least two inches in length – and perhaps larger, said Prof Chin.

Each individual would have been as big as 20 to 60 percent the width of an average hadrosaur beak, meaning it was unlikely they were unwittingly swallowed, she said.

Prof Chin said: “While it is difficult to prove intent regarding feeding strategies, I suspect these dinosaurs targeted rotting wood because it was a great source of protein in the form of insects, crustaceans and other invertebrates.

“If we take into account the size of the crustaceans and that they were probably wriggling when they were scooped up, the dinosaurs would have likely been aware of them and made a choice to ingest them.”

Her team was unable to determine what kind of crustaceans they were. But fossil crab claws have been found in the same area in a slightly older rock formation.

Prof Chin, who is curator of paleontology at the university’s Museum of Natural History, said Utah appears to have been next to or near a sea during the Cretaceous Period.

She also suspects the consumption of crustaceans was a seasonal dietary shift, perhaps tied to the breeding and egg laying activities of dinosaurs.

She said: “If we found one coprolite with a crustacean fossil in it, that would be a really interesting scientific discovery.

“But it wouldn’t necessarily indicate a recurring feeding behaviour.

“We now have multiple coprolites with crustacean fossils, showing at least some types of herbivorous dinosaurs occasionally engaged in this unanticipated feeding strategy.”

The researchers sliced the coprolite material into thin sections that were then analyzed with an electron microprobe to determine their chemical composition.

In this case they found an abundance of calcium, said Prof Chin.

Utahceratops gettyi had a particularly large horn over the nose, resembling a giant rhinoceros with a supersized head.

The second animal was named Kosmoceratops richardsoni and with a total of 15 horns on its head, it is the most ornate-headed dinosaur discovered to date.

The hadrosaurs were the most common dinosaurs. The secret of their success lay with the duck shaped bill that clipped vegetation and up to nearly 1,000 small teeth that ground it down.