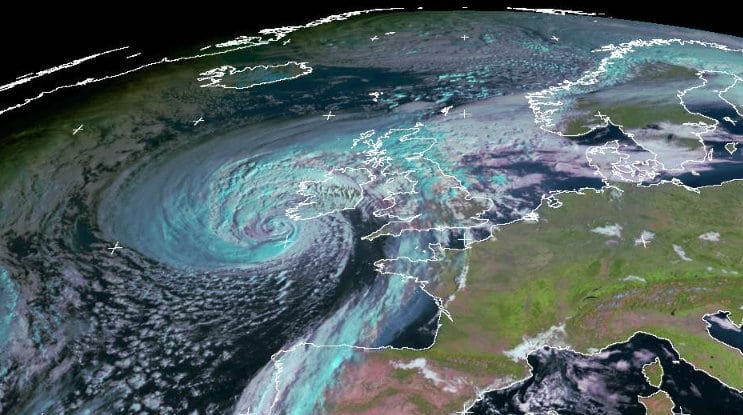 Hurricanes are moving across land almost a third slower because of climate change – bringing more devastation than ever before, a study shows.

Their speed has been reduced by 30 per cent over certain areas stretching from Russia to Japan, Korea and the Philippines – putting thousands of lives at risk.

The tropical storms have also slowed by a fifth in the Atlantic and around Australian.

It caused 89 deaths last August as it swept Texas with about half reported in Houston – the fourth biggest city in North America.

Now a US team has found tropical cyclones – more commonly referred to as hurricanes and typhoons – are taking much longer to move from place to place.

But this rate of reduction doubles in Europe, Australia and the US and triples in south east Asia.

Professor Jim Kossin, a US government atmospheric research scientist based at Wisconsin-Madison University, said: “Of great importance to society tropical cyclones over land have slowed down 20 per cent in the Atlantic, 30 per cent in the western North Pacific and 19 per cent in the Australian region.

“These trends are almost certainly increasing local rainfall totals and freshwater flooding – which is associated with very high mortality risk.”

With more water vapour in the atmosphere due to global warming as little as a 10 per cent slowdown could double local rainfall and flooding caused by just a one degree centigrade rise in temperature.

This is well below the 1.5 degrees centigrade target set by the Paris Agreement.

Hurricanes have slowed in both hemispheres and in every sea basin except the Northern Indian Ocean, say the researchers.

But tropical cyclones have generally slowed more in the Northern Hemisphere where more of these storms typically occur each year.

Regionally, the western North Pacific Ocean has seen the most slowing at 20 per cent, followed by the region around Australia at 15 per cent.

The study published in Nature said Hurricane Harvey serves as a dramatic example of the consequences a slow-moving or ‘stalled’ tropical cyclone can produce.

Harvey – the hurricane that refused to leave – dumped upwards of 50 inches of rain on Houston and the surrounding area in just five days.

Thousands of people had to be rescued. The flooding displaced 30,000 people and damaged or destroyed over 200,000 homes and businesses. 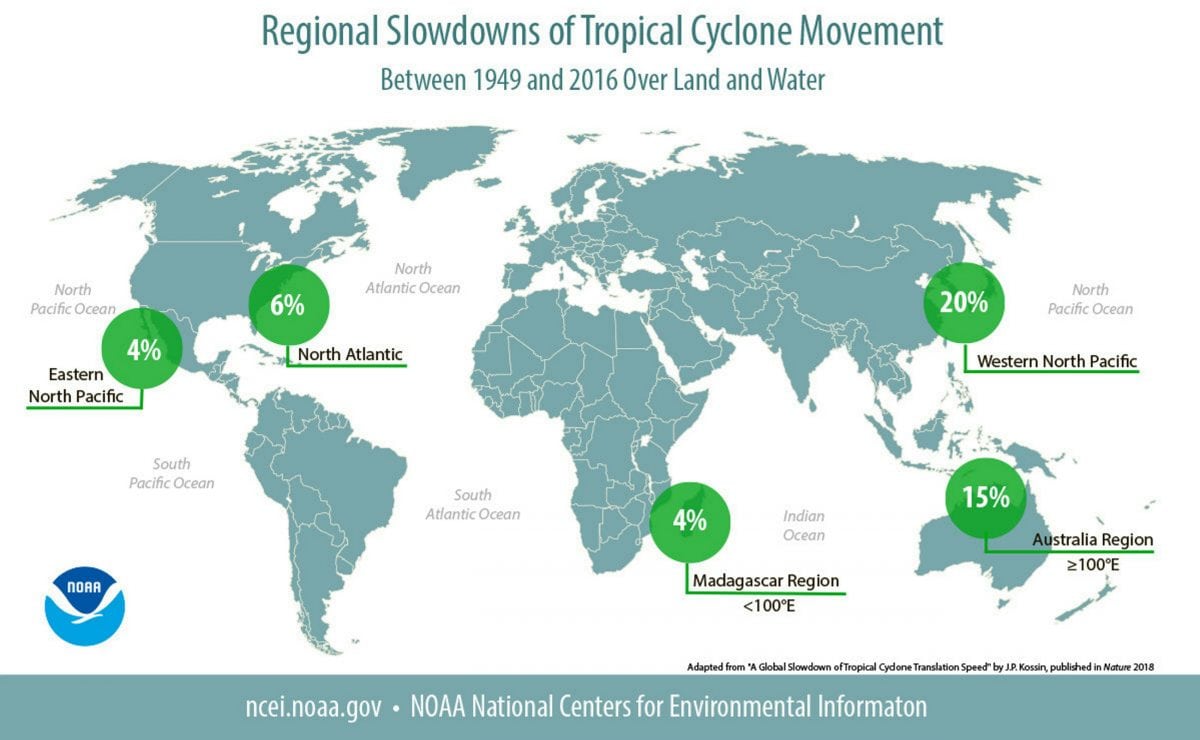 Slower movement was not the only factor. Harvey also reversed direction – causing it to impact the same region for a particularly long period of time.

Prof Kossin and colleagues say as with Harvey and hurricanes Maria and Irma – also in 2017 – a complex interaction of environmental factors controls how intense a tropical cyclone becomes.

But steering winds are typically the main forces that control how fast it moves and drive it to where it’s going.

In a warming world atmospheric circulations are expected to change – and those fuelling hurricanes will probably weaken.

Prof Kossin said: “The observed 10 per cent global slowdown occurred in a period when the planet warmed by 0.5 degrees centigrade.

“But this does not provide a true measure of climate sensitivity and more study is needed to determine how much more slowing will occur with continued warming.

“Still, it’s entirely plausible that local rainfall increases could actually be dominated by this slowdown rather than the expected rain-rate increases due to global warming.”

Even Britain was hit by a hurricane last year – Hurricane Gert — which swept across the Atlantic to deluge the North in August.

Previous hurricane-based storms which crossed the Atlantic to hammer the UK include Hurricane Bertha in August 2014 which hit with gusts up to 94mph, six inches of rain and floods.

September’s 2012’s ‘Child of Hurricane Nadine’ tempest killed one and caused floods, and September 2011’s Hurricane Katia caused one death amid gusts up to 98mph, with floods and widespread travel chaos.

One thing scientists do know is the location where tropical cyclones reach maximum intensity has been shifting toward the poles.

And, this may be related to or even causing the overall slowdown.

Continued research into how our changing climate is impacting tropical cyclones is essential to understanding and predicting changes in risk that are occurring across the globe.