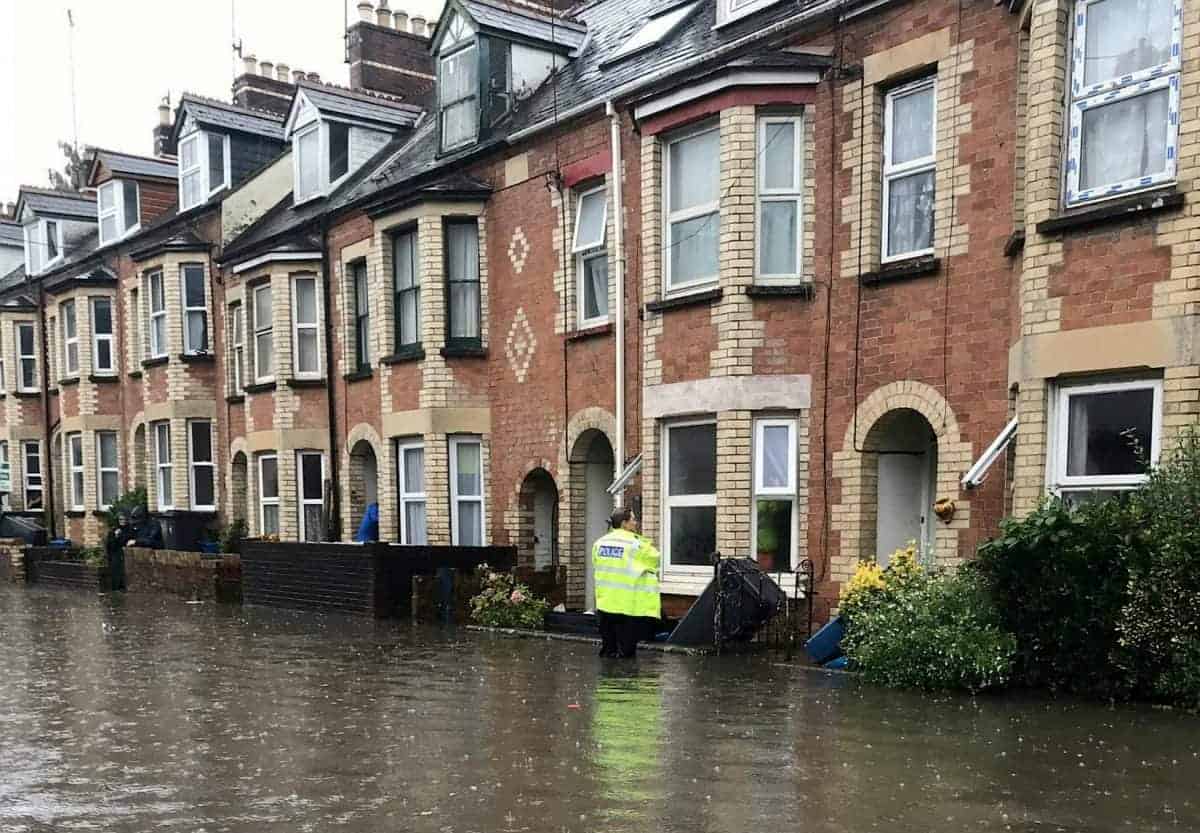 An entire town has been shut down due to flash floods as water levels reached up to waist-high.

Emergency services have warned people to stay away from Ottery St Mary in Devon after heavy rain caused widespread disruption.

Several roads in the town are impassable and it is feared some homes may also be flooded.

One mum told how she feared she might drown when the flash flooding almost knocked her off her feet.

The Met Office had issued a yellow warning of thunderstorms in the area for the whole of Monday – but Ottery St Mary is taking the brunt.

Rachel Hine, 29, was waiting for a bus in Cadhay Lane this afternoon at 1pm when the weather took a turn for the worse.

Within 15 minutes the rainfall turned into flood water, causing chaos for motorists and pedestrians.

Rachel, a crèche assistant who had been attempting to get a bus back to her home in Exeter, Devon, said: “It was raining most of the morning and then I left by boyfriend’s house at 1pm and it was still raining.

“I could see there were puddles but within 15 minutes it was really bad. It was very loud due to the sheer force of the water and I was getting soaked as water was coming up and through the bus shelter.

“It was scary being on my own because I was thinking I would drown as water was coming further up the pavement. By the time I left the bus stop I almost fell over from the force of water which was brown and murky and going quite fast.

“It was half way up my shin as I walking across the road to get back to my boyfriend’s house. By the time I got back my boots were full of water and I was absolutely soaked.”

Rachel is currently stranded in Ottery St Mary and has had to arrange for her parents to look after her nine-year-old son.

She added: “I would just urge everyone to be careful and I hope everyone is safe.”

Police are currently at the scene to help drivers through the flooded water.

East Devon District Council said: “We are working with our partners Devon County Council, who are the lead local flood authority, to ascertain the extent of the flooding in Ottery St Mary and to find out whether residents have been flooded internally.”

Some local residents have also reported the water had entered their homes.

Imii Millard posted a series of pictures of the flooding on Facebook and wrote: “It came in the back door a bit.

“The road is still flooded but is now going down now. As you can see this is was a great idea building new houses without sorting out the flooding issue.”

A Met Office spokesperson said: “The yellow warning remains in place until 8pm, and East Devon is likely to see heavy downpours going into rush hour.

“The rain then moves into the English Channel into the evening.

“East Devon still has heavy rain falling, and over the next few hours it will remain with the risk.

“The rain will start to ease from 6pm.

“It will though be a drier day tomorrow, rest of week will see pieces of rain but nothnig as heavy.

“At Exeter Airport in the last six hours, there has been 14mm of rain