Have I Got News For You joked on Twitter: "Several buses arrive at Westminster amid fears Dominic Cummings won’t be able to throw entire government under just one." 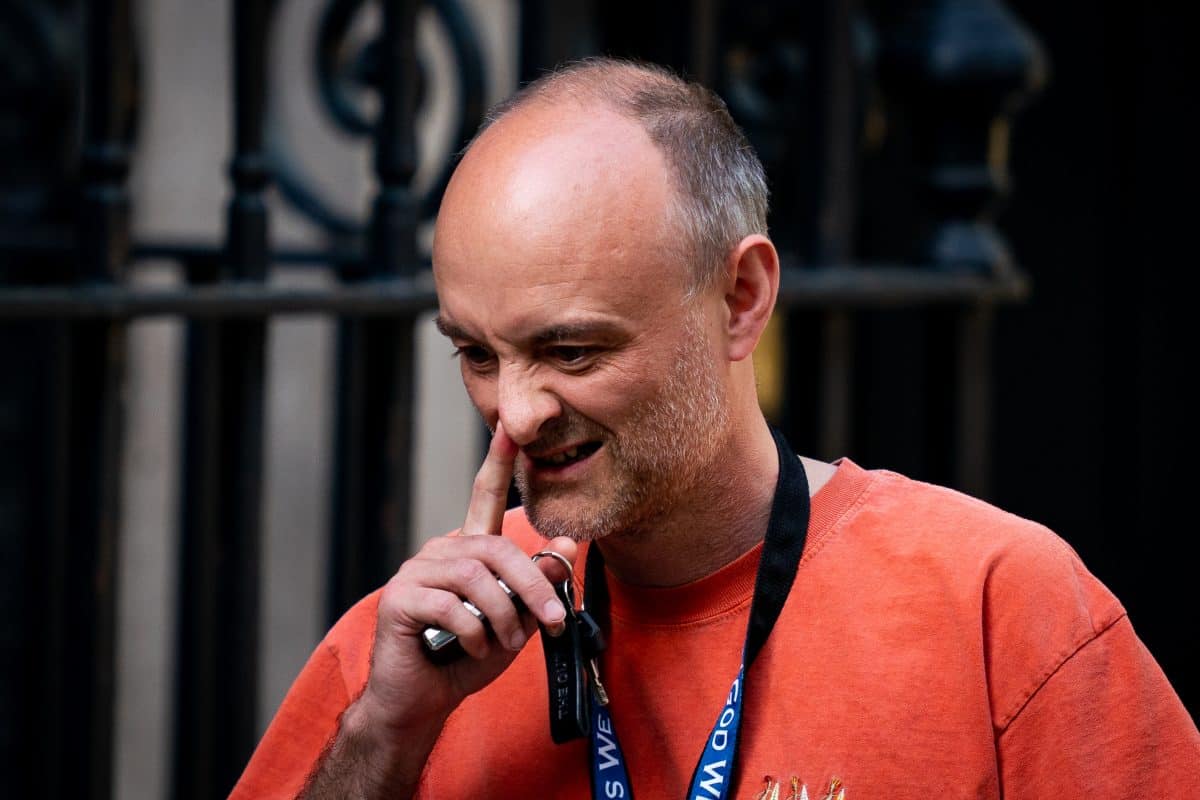 Dominic Cummings has warmed up for his appearance before MPs by posting a series of more than 60 tweets criticising the Government’s decision-making in the early days of the pandemic.

What should we expect when Boris Johnson’s former adviser gives evidence to a joint inquiry of the Commons Health and Social Care and Science and Technology Committees on Wednesday?

– Did the lockdown come soon enough?

Mr Cummings is known to have advocated tougher lockdown measures, while it has been suggested Boris Johnson was reticent to lock down too early.

In fresh allegations made by Mr Cummings on Twitter this week, he said that on March 14 last year one of the things being “screamed at” Mr Johnson was that there was “no plan for lockdown” and “our current official plan will kill at least 250k and destroy the NHS”.

According to ITV’s Robert Peston, Mr Cummings is expected to allege the PM delayed the autumn lockdown after saying “Covid is only killing 80-year-olds”.

Peston reported that Mr Cummings will outline how Mr Johnson did not wish to repeat what he saw as his mistake from March last year and said: “I’m going to be the mayor of Jaws, like I should have been in March.”

No 10 did not deny the remarks but said: “There is a huge task for this Government to get on with.

“We are entirely focused on recovering from the pandemic, moving through the road map and distributing vaccines while delivering on the public’s priorities.

“Throughout this pandemic, the Government’s priority has been to save lives, protect the NHS and support people’s jobs and livelihoods across the United Kingdom.”

In his extensive Twitter thread Mr Cummings claimed the Scientific Advisory Group for Emergencies (Sage) was split over whether to lockdown as late as March 18, with Department of Health and Social Care officials reportedly saying “lockdown just means it pops back up again in 2nd wave so why change strategy”.

He also suggested subsequent lockdowns after the first would not have been needed had mass testing had been developed properly earlier in the year.

He said: “If we’d had the right preparations + competent people in charge, we wd probably have avoided lockdown1, definitely no need for lockdowns 2&3. Given the plan was AWOL/disaster + awful decisions delayed everything, lockdown1 became necessary”.

However his now strict approach to lockdowns and following the rules may raise eyebrows given the furore caused by his trip to County Durham and Barnard Castle in late March 2020.

Government ministers have said herd immunity was not a tactic the Government looked to deploy at the outset of the pandemic.

But Mr Cummings claimed that the official pandemic preparation plan had outlined that the strategy was to have one peak of the disease, before reaching herd immunity by September.

He said the policy – to build up resistance in the population by allowing some spread of the disease – was only dropped in March last year after a warning it would lead to a “catastrophe”.

Dr Jenny Harries, who was deputy chief medical officer for England at the time, previously said: “I can categorically say I have never been in any Government meeting where herd immunity was put forward at that point of the pandemic as a mechanism of control.”

In his tweets, Mr Cummings dismissed Government denials at the time as “bullshit” and said that No 10 had chosen to lie – a move he described as “very foolish” and demonstrating “appalling ethics”.

He also hinted he may have documentary evidence to back his assertions which he could potentially produce when he appears on Wednesday before the Commons health and science committees.

– Has the Government been transparent enough?

The PM’s former top aide has claimed “secrecy contributed greatly to the catastrophe” in February and March last year.

Mr Cummings said that “openness to scrutiny would have exposed Government errors weeks earlier than happened” and that public scrutiny of plans would help stop a situation where vaccines do not have an impact on new variants.

“This will hopefully show it’s been taken seriously,” he said. “If not, better learn now that the Gvt has screwed up again than when ‘variant escapes’ news breaks.”

He added: “I can think of no significant element of Covid response that wd not have been improved by discarding secrecy and opening up.”

And he said that having seen the classified elements of the response, some 99% of vaccine plans could be made public without rising national security.

He also called for the minutes of Sage meetings to better reflect the exchanges which happened there.

– Was the Government prepared for a pandemic?

Mr Cummings said that plan to tackle coronavirus “was supposed to be ‘world class’, but turned out to be part disaster, part non-existent”.

He said MPs should push for the Government to be more open about preparedness plans for “more dangerous things than Covid… before we find out the hard way they’re as ‘world class’ as the Covid plan”.

In October 2016, the Government carried out Exercise Cygnus, which aimed to test plans for a future “worst-case-scenario” flu pandemic affecting up to 50% of the population and causing 200,000 to 400,000 excess deaths.

But former health secretary Jeremy Hunt has admitted the UK prepared for the wrong type of pandemic.

– What can be learned from the public inquiry?

Mr Cummings has backed the idea of a public inquiry but also expressed fears that it would not get answers.

He said: “If SW1 wanted to ‘learn’ there wd already be a serious exercise under way. The point of the inquiry is the opposite of learning, it is to delay scrutiny, preserve the broken system & distract public from real Qs, leaving the parties & senior civil service essentially untouched”.

Mr Johnson said earlier this month there would be an independent public inquiry with statutory powers into the handling of the coronavirus pandemic.

The inquiry will be able to take oral evidence under oath, he said, adding that the state has an obligation “to learn every lesson for the future”.

– Did the Government close the borders soon enough?

As ministers came under recent pressure over an apparent delay in closing the borders as the Indian variant of Covid grew in risk, Mr Cummings described the early policy at airports as a “joke”.

Home Secretary Priti Patel has said she advocated closing the UK’s borders in March last year, but was apparently overruled, as the balance between public health and the economy was weighed up.

One paper considered by Sage in April said there was little justification for closing borders while case numbers were high, with imported infections representing a tiny proportion of cases.

In a tweet on May 17 Mr Cummings said: “There’s a general western problem based on nonsense memes like ‘asians all do as they’re told it won’t work here’.

“This is what many behavioural science ‘experts’/charlatans argued, disastrously, in Feb2020. This nonsense is still influencing policy, eg our joke borders policy”.

– Did the Prime Minister miss key Covid meetings to write a book about Shakespeare?

Mr Johnson did not chair the first five meetings of the Cobra emergency committee relating to coronavirus in January and February 2020, and a Sunday Times report suggested officials fear Mr Cummings will use an appearance before MPs to accuse Mr Johnson of missing the meetings because he was working on a biography of Shakespeare, as he needed the money to fund his divorce from Marina Wheeler, his second wife.

Asked if the Prime Minister had spent time on the book, his official spokesman said: “No, not that I’m aware of.”

The Prime Minister has been “ensuring the public are kept as protected as possible during this global pandemic”, the spokesman added.

In response to the suggestion the book was responsible for him missing Cobra meetings, the spokesman said: “No, and I think there are a number of incidents I can run you through where Cobras have been chaired by relevant secretaries of state.”

– How about his own involvement?

Since leaving Government in November after a behind-the-scenes power struggle Mr Cummings has become one of the harshest critics of Mr Johnson’s administration.

But questions have also been posed as to why, as the PM’s most powerful adviser who spoke with Mr Johnson’s authority, he did not do more.

MPs may quiz Mr Cummings on how he could both be at the centre of Government but also seemingly be powerless to change course of the response to the pandemic.

Asked on Monday if Mr Johnson believed Mr Cummings was a liar, following the outpouring of allegations, the spokesman said: “I haven’t asked him that question.”