The vile chat also included a string of sexist, misogynistic and offensives messages - including jokes about rape and comments that George Floyd "had it coming". 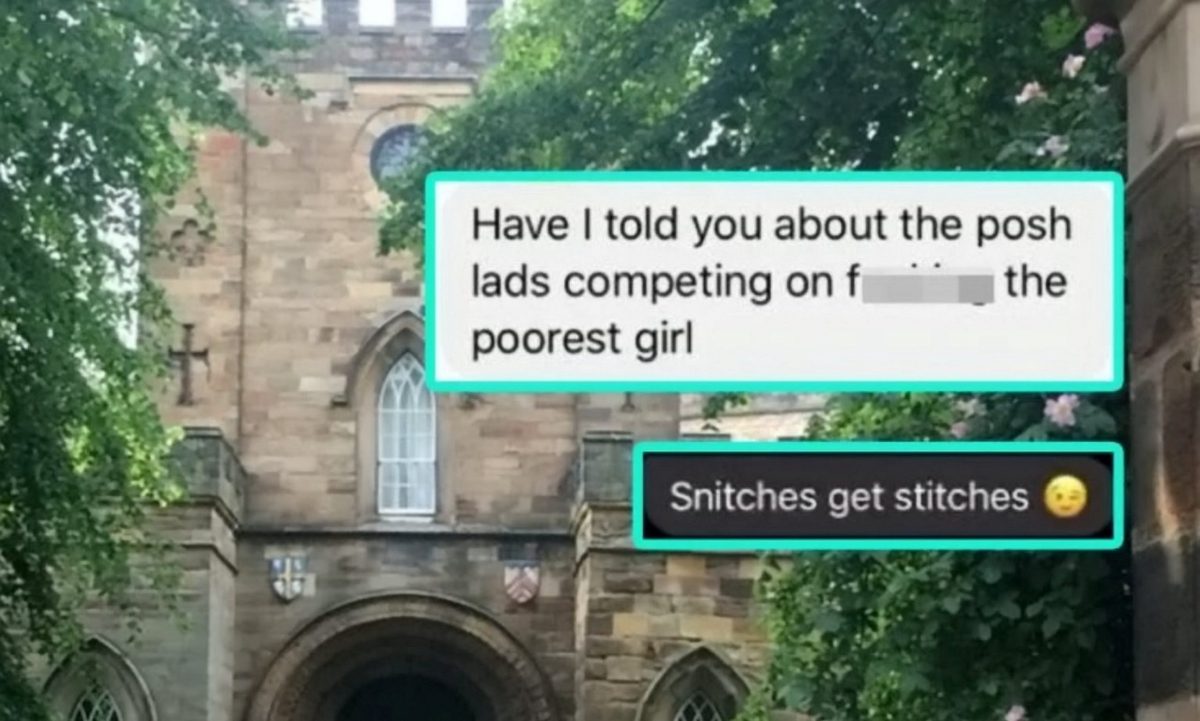 A Durham University fresher who was a member of a “Posh Lad” WhatsApp group has been expelled for discussing a contest to have sex with the poorest girl.

The male student, who has not been named, had their offer to study at the prestigious university withdrawn after the “utterly abhorrent” chat exchange came to light.

He sent messages regarding a Fresher’s Week contest to “f**k* the poorest girl on campus in the group called “Durham Boys Making All The Noise.”

The vile chat also included a string of sexist, misogynistic and offensives messages – including jokes about rape and comments that George Floyd “had it coming”.

They included references to spiking women’s drinks and boasts about plans to have sex with multiple female students.

One wrote that he would “sleep with a different bird every night just for a bed” while another put:” So many people get accused of rape. I’m always worried about it after.”

The student who leaked the screenshots of the messages which sparked outrage told student news site The Tab: “The groups were set up as fresher groups.

“There was a lads one that was made just for guys and this was the type of language that was being said. It was sent onto some of the other group chats to warn us.

“I was outraged and decided to publicly post about it. It’s made girls say that they’re now scared to come to Durham Uni”.

One of the members of the chat told The Durham Tab: “The purpose of the chat wasn’t to objectify women or any of that.

“Most of the chat was just lads getting to know each other with those ridiculous exceptions.”

University bosses launched an investigation after the chat was exposed two weeks ago and they have now confirmed one student has been kicked out.

Pro-Vice-Chancellor Jeremy Cook said: “Recently Durham University was made aware of some utterly abhorrent comments on social media purported to have been posted by Durham students.

“As we said at the time, we condemn the content and behaviour demonstrated in these social media posts, which is entirely unacceptable and violates the values and behaviours that we uphold as a University community.

“We immediately instigated an urgent investigation by our Student Conduct Office.

“This was led by a member of the University community who is an experienced lawyer and supported by another who is a former police officer.

“A full and proper investigation was conducted.”

The statement says one student was suspended as a result of the messages but two other students involved were found not to have fallen short of Durham’s values.

Mr Cook added: “As a result of this investigation, which was conducted under the University’s Admissions Policy, one male who was due to begin studying at Durham University next month has, in accordance with the terms of their offer, had their offer withdrawn.

“This was due to his behaviour falling short of the values we uphold, as reflected in our regulations.

“Two other males were not found to have fallen short of the values we uphold and will begin studying at Durham University next month.”

He also said a number of messages included in the investigation were not able to be conclusively connected with Durham students.

The statement added: “Several other individuals were investigated, but were found to have no identifiable association with Durham University and are therefore not subject to University values within our regulations.

“We are continuing to investigate other indirectly related comments that have been brought to our attention.

“If other comments of an abhorrent nature such as those we have investigated are found to be genuine and attributable, we will take further swift action to ensure that those involved have no place at Durham University.”