The veteran will remain in his wheelchair opposite Downing Street without eating until the Government agrees to address the Gurkhas’ issues. 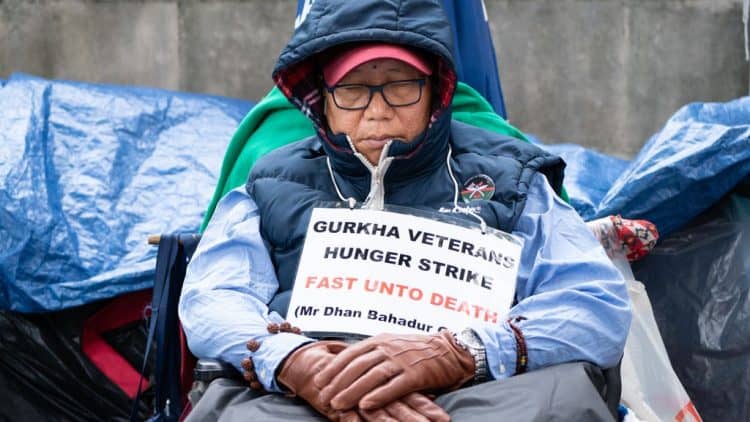 A Gurkha veteran on hunger strike outside Downing Street has “less than a week” before his condition becomes serious, a spokesman has said.

Dhan Gurung was taken to hospital with heart problems shortly after 1.30am on Wednesday before being discharged.

The 60-year-old, from Basingstoke, is part of a group of protesters calling for equal pensions for Gurkhas who retired before 1997 and are not eligible for a full UK armed forces pension.

They have not eaten for more than 12 days and the situation is becoming “worse day-by-day”, according to Laxmi Ghising, speaking on behalf of the group.

He said Mr Gurung – who has problems with diabetes – was taken to hospital after his body turned cold and his blood pressure became too high.

Mr Ghising told the PA news agency: “He’s comfortable now, if he had refused to go to hospital there would have been very bad consequences- he might have collapsed.

“Fortunately he agreed to go to hospital for the treatment and once he came back he’s now okay, but he’s not comfortable to talk.”

He went on to say that Mr Gurung continues to feel cold and tired, while his tongue has become inflamed.

However, he said the veteran will remain in his wheelchair opposite Downing Street without eating until the Government agrees to address the Gurkhas’ issues.

Asked how long it will be before his health situation becomes serious, Mr Ghising added: “Maybe less than a week. All the general public, all our campaigners are panicking – we are really rushed.

“Come on Government, come on, we just need your black and white letter saying the date and time for the dialogue meeting.

“Once we receive that letter we will immediately cease this hunger strike.”

The Gurkha men, recruited from the rugged Himalayan country of Nepal, have a reputation as hard and loyal fighters, and are known for the trademark curved kukri blades they carry sheathed on their belts.

Around 200,000 fought in both world wars, also serving in places such as Hong Kong, Malaysia, Borneo, Cyprus, the Falklands, Kosovo, Iraq and Afghanistan.

Those who served from 1948 to 2007 were members of the Gurkha Pension Scheme until the differences between Gurkhas’ terms and conditions of service and those of their British counterparts were removed.

Speaking previously about the protest, Mr Gurung said: “We will keep coming back here, we want to continue our hunger (strike) until death.

“We don’t care about sacrificing our life.”

Related: ‘We don’t care about sacrificing our life:’ Gurkha on hunger strike outside No10 taken to hospital