One person called the front page 'hypocrisy on steroids'. 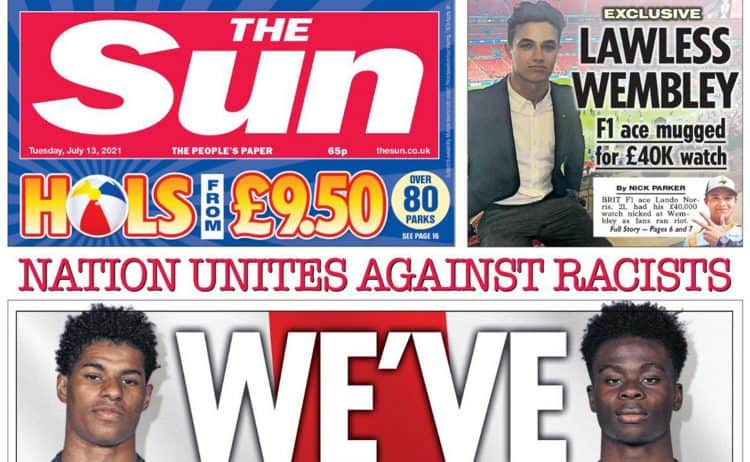 Social media users have reacted with disbelief after The Sun told victimised England players “we’ve got your back” in the wake of England’s defeat in the Euro2020 final.

The prime minister, the Football Association and the Duke of Cambridge have all condemned the abuse, while England manager Gareth Southgate described the hate directed at the players as “unforgivable”.

During a Downing Street briefing on coronavirus, Mr Johnson said: “To those who have been directing racist abuse at some of the players, I say shame on you and I hope you will crawl back under the rock from which you emerged.

“Because this entire team played like heroes and I’m sure that this is just the beginning of their achievements, and I say bring on Qatar next year, and let’s also dare to start to hope, together with Ireland, our United Kingdom can host the World Cup in 2030.”

But it was the front page of The Sun newspaper that caught the attention of people on social media this morning.

Featuring pictures of Rashford, Sancho and Saka the redtop splashed ‘We’ve got your back’, much to the disbelief of many people on social media.

Rebekah Brooks has felt the tide changing and told Harry Cole to tone down his ‘anti woke’ BLM=Marxism rhetoric. Don’t be fooled for a moment. They gamed racism when they wanted to. No change of heart. Just opportunism and fear

Possibly the most hypocritical thing I've EVER seen #DontBuyTheSun pic.twitter.com/TgCOVmS3zM

The first pic is tomorrow’s paper, the rest are previous editions. #dontbuythesun pic.twitter.com/mA1RNtWJFd

I haven't bought the Scum since 1996, but this is hypocrisy on steroids#dontbuythesun pic.twitter.com/d1hbdZpYTL

Related: Baroness Warsi: We Conservatives need to think about our role in feeding racism in our country