“Revealing them casually, through an unusual media exposure even if it’s the commander in chief, would prove a propaganda boom if any of this personnel are detained by a hostile government or captured by a terrorist group. There would be no denying who you are and what you do.” 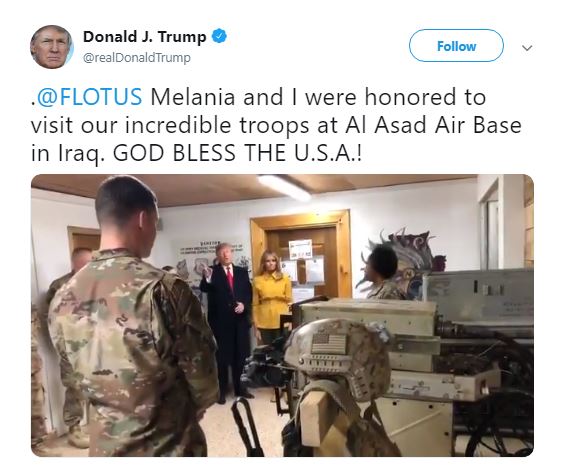 In a video posted on his Twitter account, Donald Trump appears to have revealed the faces and identified special forces operating in Iraq on his visit there with the First Lady this week.

US Navy Seals are deployed in secret, their faces usually blurred out in any media images to keep their identity and operations covert.

But Newsweek has reported that in a video Donald Trump tweeted after a festive visit to the troops in Iraq with Melania Trump this week, covert Navy Seals are identifiable from their kit, uniform and unblurred faces.

“.@FLOTUS Melania and I were honored to visit our incredible troops at Al Asad Air Base in Iraq. GOD BLESS THE U.S.A.!” Trump had tweeted, appearing to be cheerily unaware.

The President, who successfully avoided any youthful militaryservice himself, has copped a lot of flack for preferring regular visits to his Florida Mar-a-Lago golf resort instead.

His trip to the troops stationed in Iraq was kept underwraps with a press embargo until he had finished addressing troops in a green military-style jacket.

It came a week after falling foul of many in the US military for a chaotic announcement of the withdrawal of US troops from Syria and Afghanistan that he had appeared not to consult his defence advisers or US allies such as the Kurds about.

The sudden move prompted the resignation of Trump’s Defence Secretary Jim Mattis – dubbed the “last grown up” in the White House.

Trump’s trip to Iraq was also a welcome distraction from his controversial shutdown of funding to public workers unless the US Congress agrees to spending $5bn (£4bn) on his wall on the Mexico border.

Though Trump’s address to US forces in Iraq caused yet more embarrassment after it was revealed that the 10% pay rise he boasted that he had given troops had not really happened.

And now it appears that the POTUS has broken military protocol by tweeting a video on Wednesday of meeting troops stationed in Iraq with Melania and inadvertently revealing special forces there.

With a booming soundtrack of “God Bless the USA” Newsweek reports the video shows the Trumps posing with members of a Navy Seal team in their full battle outfits including night vision goggles.

According to Newsweek, defence staff said that revealing information on what units are deployed and where is almost always classified and endangers operational security.

Former US Navy Intelligence specialist Malcolm Nance told Newsweek: “operational security is the most important aspect of personnel deployments. The real names, faces, and identities, of personnel involved inspecial operations or activities, are usually a closely held secret in a combat zone.

“Revealing them casually, through an unusual media exposure even if it’s the commander in chief, would prove a propaganda boom if any of this personnel are detained by a hostile government or captured by a terrorist group. There would be no denying who you are and what you do.”