Passers-by attempted to form a human barrier to prevent the attack. Four deer have died from dog attacks in the Royal Parks since March 2020, while there have been 58 incidents of dogs chasing the herds – a big increase on previous year. 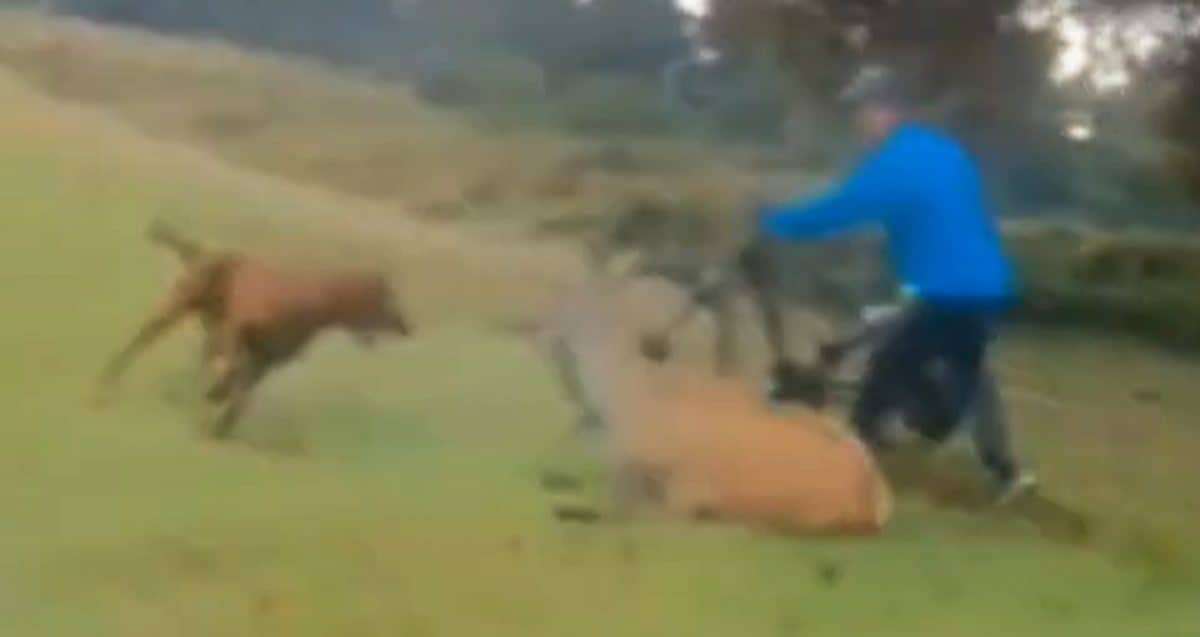 Frame taken from video dated 1/10/2020 and released by London's Metropolitan Police of a red setter dog attacking a deer in Richmond Park. Despite the efforts of passing cyclists the animal suffered significant injuries and was later put down by a gamekeeper. The dog's owner, Franck Hiribarne, 44, from Kingston, pleaded guilty of causing/permitting an animal they were in charge of to injure another animal in a Royal Park and was handed a total fine of £602. Issue date: Monday January 18, 2021.

A man has been fined £600 after his dog fatally injured a deer in London’s Richmond Park.

Passers-by attempted to form a human barrier to prevent the attack.

Police are urging dog owners to keep their pets on a tight lead after it emerged that incidents of pets worrying deer herds in the capital’s eight Royal Parks have shot up during lockdown.

Franck Hiribarne’s red setter, Alfie, was caught on camera, rushing at the small doe, jumping up at her and dragging her backwards, at around 9am on October 1 last year.

Despite the efforts of passers-by to get between the two animals, witnesses described the attack as “relentless”, leaving the deer with deep wounds to her hind parts and tail, which was partially detached.

The doe also suffered a broken leg after being hit by a car in her attempts to get away.

She was found a short while later, collapsed in the ferns, and had to be put down by a gamekeeper.

Mr Hiribarne, 44, from Kingston, south-west London, pleaded guilty at Wimbledon Magistrates’ Court on January 15 to causing or permitting an animal he was in charge of to injure another animal in a Royal Park.

The defendant reported the incident himself to the Royal Parks Office, while other witnesses spoke to officers in a passing police car.

Mr Hiribarne said he usually walked Alfie on a lead until he was well away from any grazing deer, and that the dog had been responding well to “off lead” commands.

He said in a statement: “I was genuinely shocked and sorry for what had happened and since then I have refrained completely from letting Alfie off leash in any park.

“I have also taken a special dog trainer specialised in gun dogs to control more accurately any of his hunting instincts. He has made great progress.”

Sergeant Pete Sturgess, from the Metropolitan Police’s Royal Parks Command Unit, said: “If you do not know how your dog will react around the deer, or you know they will chase them, then please respect the wildlife by keeping them under control on a lead, or choose an outside space other than Richmond or Bushy Parks to walk off lead.”

Four deer have died from dog attacks in the Royal Parks since March 2020, while there have been 58 incidents of dogs chasing the herds – a big increase on previous years – according to the manager of Richmond Park.

Simon Richards: “It’s imperative that owners ensure their dogs are under control at all times.

“It’s illegal for a dog to chase deer in Richmond and Bushy Parks, and owners may face prosecution if caught.”

Part of the increase is thought to be down to new dog owners unfamiliar with the best conduct around wildlife.

On December 30, David Reay, 69, from Kingston, pleaded guilty at Wimbledon Magistrates’ Court to allowing his dog to attack and kill a fallow deer in Richmond Park.

He was ordered to pay £604 in costs and compensation for the incident on September 12 last year.