“This kind of hostile environment creates division within the cultures themselves, and it pits the bulls against each other while the matador watches from a safe place" - Thor Benson

by James Melville
in Media, News 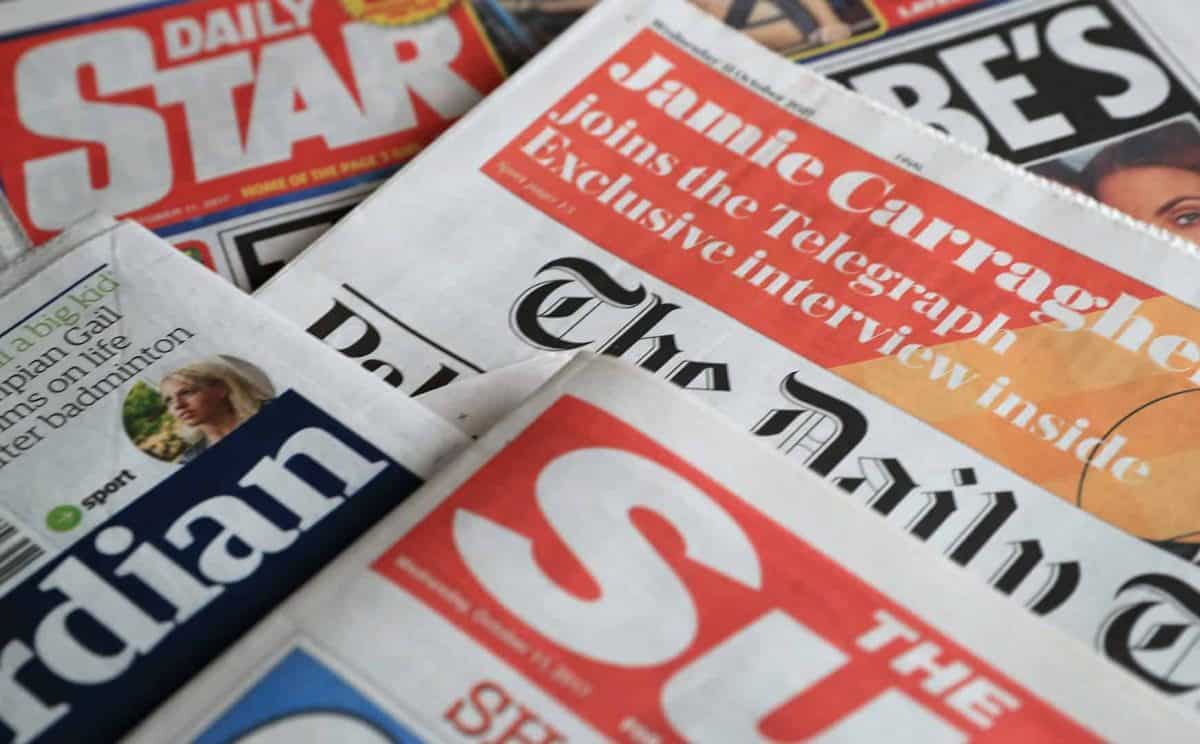 We are being gaslighted by our tabloid media. They hurl abuse at a specific target or targets and when anyone dares to stand up to them, they double down with faux indignation and pivot towards playing the victim. They have constructed a whole structure of political and cultural discourses that have become a set of binary choices. Vilification and ostracisation then occurs if anyone ever dares to stand up to them.

This divide and rule discourse wrapped around a culture war has been ratcheted up since the EU referendum, where a Pandora’s box of normalised idiocracy, hatred and division has opened up. Previously repugnant opinions and discourse that were previously considered off limits or on the margins of society went mainstream. What was unleashed was the extreme reactionary and xenophobic imagery of Nigel Farage standing next to a poster with Middle Eastern refugees with a poster headline that screamed ‘Breaking Point’. Reality TV grifters like Katie Hopkins have become high profile media commentators with huge platforms to spew out islamophobia on a daily basis.
Hatred has become common parlance. Demagoguery has become a vote winner. So much so that the doyen of culture war demagoguery is now the 45th President of the United States.

All of this normalised hatred is played out on our traditional media and then amplified and regurgitated as the world’s biggest pub argument on social media. Extremism on the margins have now rebranded as ‘populism’ and a resulting snowball effect of unleashing wider bigotry within society. It’s hardly a surprise that racially linked hate crimes in England and Wales have doubled since 2012, and have significantly spiked since the EU referendum in 2016.

We now have an almost deafening cacophony of differing views what is the correct or incorrect British way of life. Brexit became the poster boy of a gigantic cultural war that now pervades the British political landscape and society at large. The chief perpetrators of this continue to throw fuel on the fire while feathering their own nests on whatever media outlet is willing to pay them, while the public at large are engineered into more fear and hatred within a bullring of division. The matadors goad and the bulls charge in.

Poisoned by a cesspit of tabloid media

Britain has been poisoned by this cesspit of tabloid media for far too long. They are poisoning the minds of millions of people into believing things that are diametrically opposite to their best interests. But this is what the tabloids want. They want a culture war because hate still sells. They also want to deflect the blame away from decades of government misdemeanours and onto something else. It has become a devious parlour game where they whisper, ‘there’s nothing to see here folks, but you might see something that you don’t like if we guide you over here’. It’s a game of psychological deflection and classic tactic of divide and rule.

The tabloid press are ripping apart a Britain that was once thought to be outward looking and inclusive, to a point where it self destructively votes to remove itself from the most successful trading alliance between nations in the history of the planet. They have achieved this by demonising foreign institutions and citizens from foreign backgrounds, specifically targeting the EU and the Muslim community.

But it goes even further than witch-hunts against troubled celebrities and divide and rule xenophobia. Our tabloid media are also seeking to undermine any established institution that is fundamentally a force for the good. Our judiciary. Our state owned broadcaster, the BBC. Our National Health Service. Our universities and schools. All of these institutions have been softened up with an endless drip feed narrative that somehow, they are either unfit for purpose or are run by a cabal of ‘sneering metropolitan elites’ or ‘lefties’. They are being softened up to justify smashing them up or selling them off.

In the case of the BBC, they have been repeatedly attacked by both flanks. The right-wing accuse them of being elitist and with a left-wing and Pro-EU bias and on the left, many have accused the BBC of being a Tory mouthpiece that displayed a lack of neutrality and fairness towards Jeremy Corbyn during his time as Labour Leader. The BBC are dammed both ways.

Nor has our legal system escaped the wrath of the right-wing tabloids. The legal system in Britain is seen as gold standard of impartiality and yet the Daily Mail literally took the law into their own hands on 4th November 2016, when they ran a headline of “enemies of the people” and an associated article about the three high court judges who ruled that parliament, and not the prime minister, by use of prerogative powers, would need to trigger Article 50 to start the UK’s exit from the European Union.

It doesn’t end there. We now have the most over promoted Attorney General in British history in Suella Braverman, who recently wrote on the Conservative Home website stating, “The catalyst for this proliferation [of judicial review challenges] was the Human Rights Act. Parliament’s legitimacy is unrivalled and the reason why we must take back control, not just from the EU, but from the judiciary.”

It appears that anything that serves to protect us, inform us or improve us is now belittled or threatened by forces that have many unpleasant motives for doing so. These forces do not have the best interests of the country at heart. Instead, they want to take control of these institutions and/or destroy them and/or conduct a fire sale of them to the highest bidder. It’s a gigantic set up to create a right-wing libertarian bonfire of the vanities.

Tabloid culture war tactics are also being utilised to create racial tension within our society. The spike in black and Asian knife crime in and around London over the past three years perfectly encapsulates the culture war divide and rule narrative and now frames the right-wing counter argument against Black Lives Matter. The police cuts, underfunding of youth services, education and social care are effects of the harsh austerity measures that have ravaged a country for almost ten years and it has led to an inevitable uplift in knife crime. Yet the usual suspects on the right-wing see this as an opportunity to attack ethnic minority culture, Sadiq Khan’s mayorship, or even Stormzy’s song lyrics. Their solution is to deflect blame away from the savage effects of 10 years of Tory austerity and instead, blame ethnic minorities whilst agitating for stop and search enforcement laws.

How many white people in America or Britain have faced a situation like Stephen Lawrence, Rosa Parks or George Floyd? What has been conveniently forgotten is that while all lives matter, history will tell you white lives have always mattered, black lives haven’t.

We are so far through the looking glass of hate right now that even a courageous 17 year-old climate change activist is getting thrown under the bus by all the usual suspects for daring to raise her head above the parapet. Instead of praising her fortitude and determination to raise awareness on what is probably the most important issue facing the entire planet, she gets vilified by one side and the other side then react to call out the vilification. Once again, the debate becomes binary and a form of toxic tribalism.

Even our Royal Family have been caught up in this culture war. This is being played out over Meghan Markle and the debate from one side about the extent to which racism is to blame for her and Prince Harry’s decision to quit as working royals and on the other side by commentators working for right-wing media outlets describing them as “Prince and Princess Woke.”

The culture war targeting of specific groups or individuals in our society within the current era can be traced back to the beginnings of austerity in 2010 where the Tory government and their media friends started to demonise individuals on welfare benefits as “benefit scroungers”. Disproportionate media coverage was given to those who caused a £2billion a year economic loss in benefit fraud rather than the £30 billion a year that was lost in corporate tax evasion. Derogatory words like “benefits” or “allowances” became the new normal within the welfare debate. Somehow along the way, we forgot to call it by what it was meant to be called, namely, “social security” – taxpayer funded state protection for those who need help the most.

Britain has become a nation of two particular identity tribes living within this culture war. The two tribes align themselves as either celebrating progressiveness, internationalism, equality and diversity and those who perceive all of these values as a threat. As long as we continue to consume media that gives platforms to gutter journalists who bully and vilify anyone within the progressive tribe as ‘woke’ or ‘snowflake’, when all they are doing is daring to stand up for fundamentally decent values, we will continue undermine our society. The sooner we turn off the tap of hated that is spewed out by these tabloid vultures, the better. Our engagement with them only benefits them. They feed off it.

We must never accept hatred from any source and in particular media fuelled hatred. We must endeavour to maintain common decency, diversity and inclusivity within an outward looking society. Because in the end, ‘I love, therefore I am’ must always win against ‘I hate, therefore I am”.

Divide and rule, that is how we end up in a culture war, and that’s what our current government and their media supporters want. But instead, we should take heed of these words of wisdom from late 18th and early 19th century German writer, Johann Wolfgang von Goethe, who wrote: “Divide and rule, the politician cries; unite and lead, is watchword of the wise.”