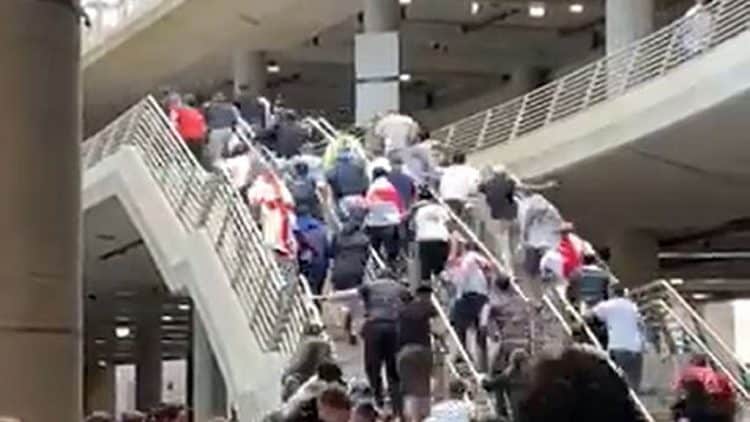 A viral video showing England fans repeatedly kick a man on the ground in a frenzied attack on Italian spectators has been met with fierce criticism online.

While most fans respectfully mourned England’s loss at the Euro 2020 final last night, footage of a thuggish minority has been shared online – branded “unacceptable” by the Met Police.

The video shows a gaggle of England fans grabbing, kicking, punching, tripping and hurling abuse at their Italian counterparts as they run for the exit out of the stadium.

Unbelievable footage of violence in Wembley tonight. A literal child gets punched by a full grown man and an Asian man is kicked repeatedly in the head by several people. Disgusting behaviour. pic.twitter.com/NLtvjgF8Fe

The footage from Wembley comes alongside a number of reports of England fans causing mayhem in the streets of London, often leading to displays of violence against opposition spectators.

Utter thuggery from English fans.. This is inside Wembley. Anyone who throws a kick at someone’s head when they’re on the ground should be arrested for attempted murder! pic.twitter.com/mx4ZjDwJR3

‘This is wholly unacceptable’, say the Met Police.

In a tweet, the Met Police condemned the brutality shown by the fans across London, saying:

“Our policing operation for the #Euro2020 final is drawing to a close. Thank you to the tens of thousands of fans who had good spirits and behaved responsibly.

“We made 49 arrests during the day for a variety of offences. We will have officers on hand throughout the night.

“Frustratingly, 19 of our officers were injured while they confronted volatile crowds. This is wholly unacceptable. A big thanks to officers across London and our blue light colleagues for their part in keeping Londoner’s safe and moving tonight.”

england fans are sore racist violent losers that need to be punished by fifa. we can't just sit & watch them physically attack italy fans at wembley then hurl racial insults at rashford, sancho & saka. fifa needs to act. we need to create an environment safe for players & fans.? pic.twitter.com/gJOv5xT2dt

Aside from the violence across London, a number of England players were subjected to horrifying racial abuse on social media after missing penalty kicks.

The abuse has since been condemned by the prime minister and the Football Association.

Boris Johnson tweeted: “This England team deserve to be lauded as heroes, not racially abused on social media. Those responsible for this appalling abuse should be ashamed of themselves.”

And an FA spokesman said: “The FA strongly condemns all forms of discrimination and is appalled by the online racism that has been aimed at some of our England players on social media.

In an impassioned Twitter thread, Rio Ferdinand described the online abuse as a “disgrace”, imploring social media companies to “protect people” on their platforms.

“Our young heroes need your attention too!” He said.

We (England) have lost in the final of #Euro2020 to the best team in the tournament. Who have been unbeaten now in 34 games, that run spans nearly 3 years!

The pre game energy in the stadium was the most electric I have seen inside Wembley stadium.

Related: Neville brands Govt ‘hypocrites’ for speaking out about racism