The Carlton Tavern survived the horrors of Nazi bombs, until it was levelled, prompting a council order to rebuild it 'brick-by-brick'. 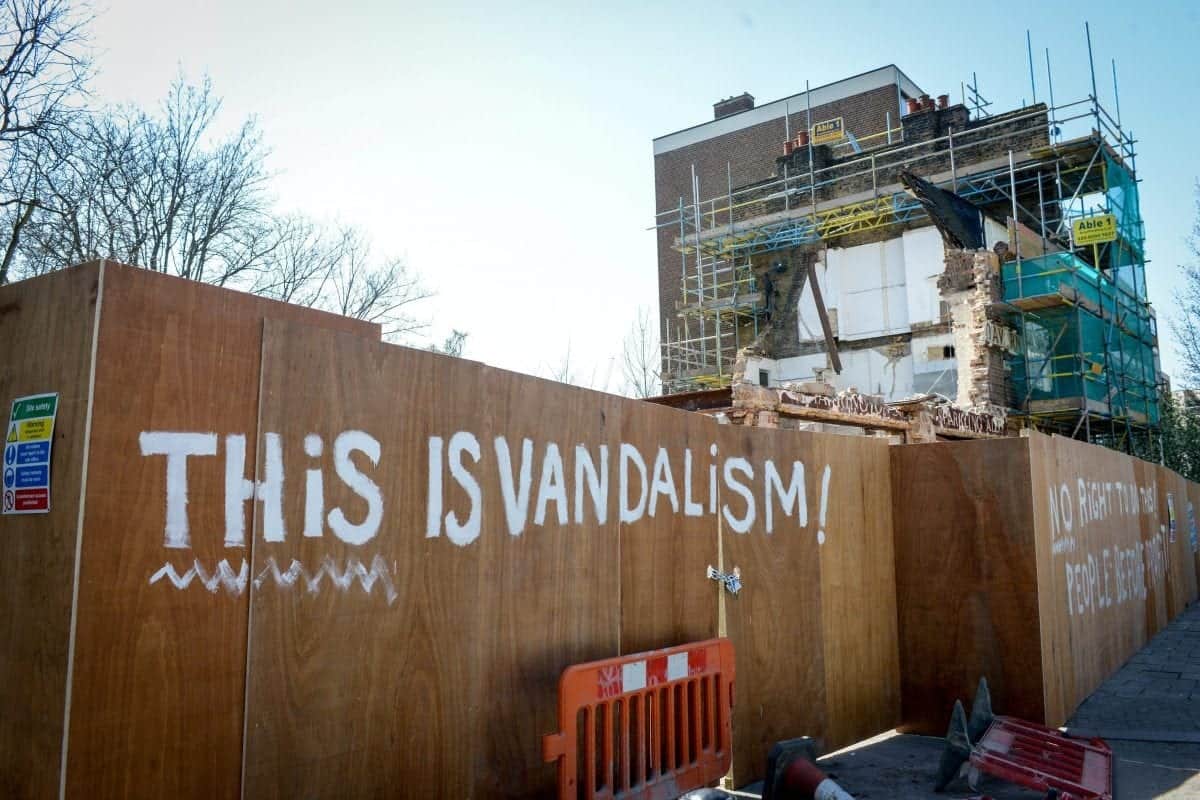 Strictly star Danny John Jules’ historic local, that survived the blitz only to be illegally demolished by developers, is finally being rebuilt.

The Carlton Tavern survived the horrors of Nazi bombs, until it was levelled, prompting a council order to rebuild it ‘brick-by-brick’.

But residents are up in arms after the historic pub has still not been finished – months after a council deadline.

Developers have started work rebuilding the legendary boozer, in Kilburn, north west London, but many, including the council, remain sceptical.

Westminster Council began ‘considering its options’ after the deadline to finish restoring the London pub was missed in May. 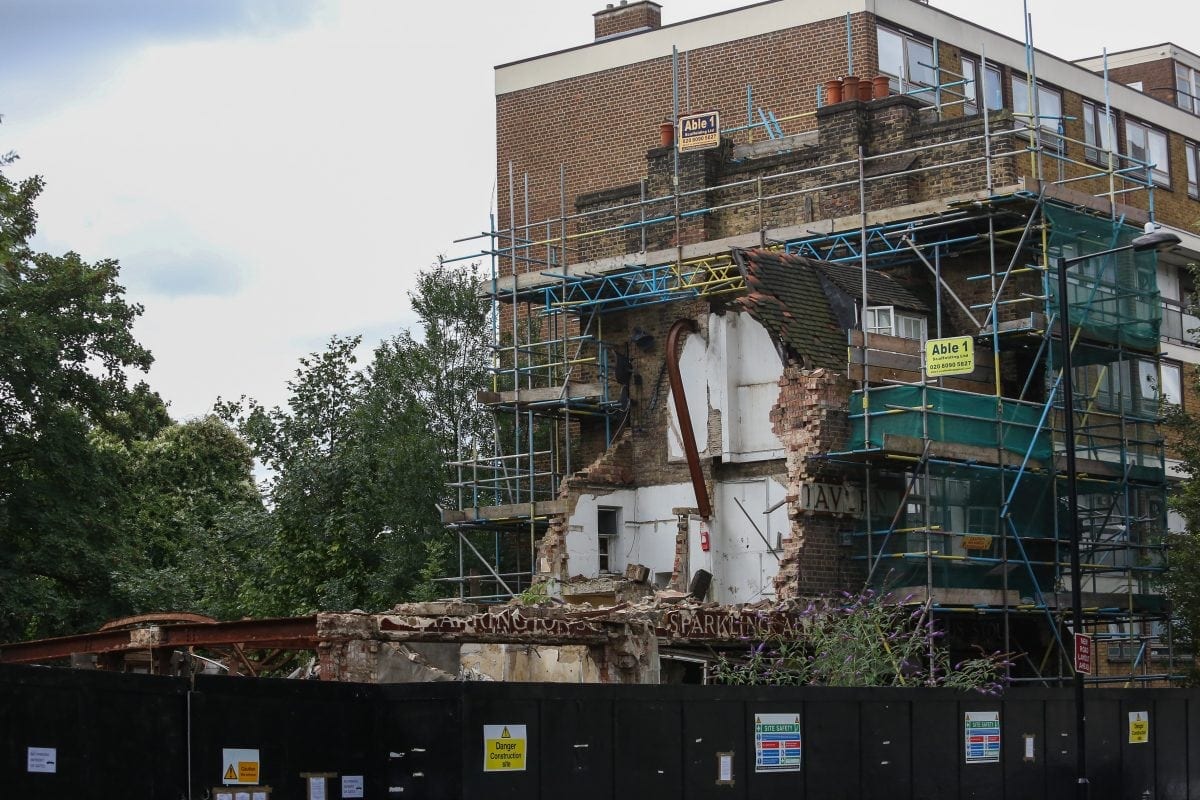 Campaigners were left fuming after developers dragged their feet on the rebuild, blasting what they called ‘several false starts’.

Regulars were left devastated when the Carlton Tavern was torn down in April 2015.

At the time, the demolition of the historic pub was described as an ‘act of vandalism on a beautiful building’ by ‘thugs and vandals’. 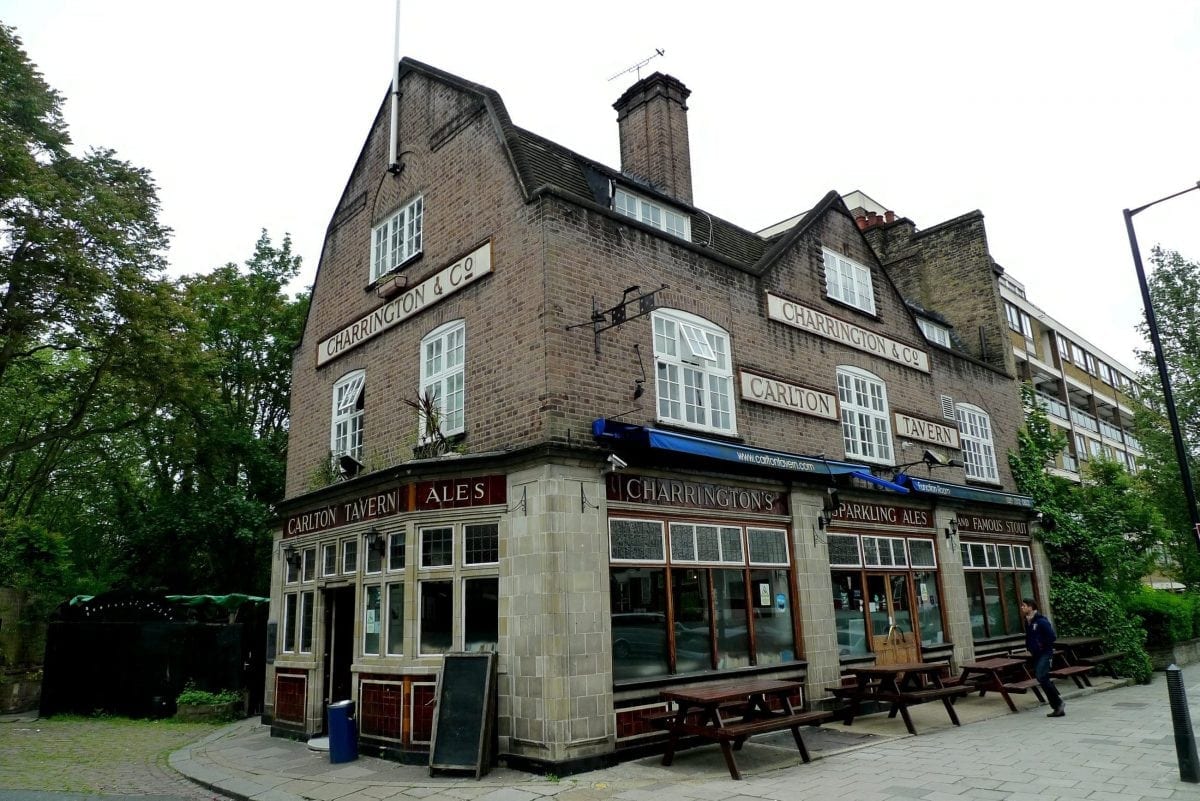 The sci-fi legend, 54, has lived in the area for most of his life, and called the council decision to recreate the pub ‘amazing news’.

He said: “They have to rebuild it brick by brick – good luck finding those bricks and all those lovely tiles – they are going to have trouble.

“They can’t just put up some Mickey Mouse tiles they’ve got serious work to do – I will hopefully get one of the first pints that come over the bar.”

Developers demolished the watering hole while it was being considered for Grade II listed status by Historic England.

The pub was the only building left standing on its street following the German bombing of London during the Second World War.

Its demolition breached planning laws, and the decision sparked a fierce backlash from punters – who demanded the 1920’s building in Kilburn, north west London, be returned. 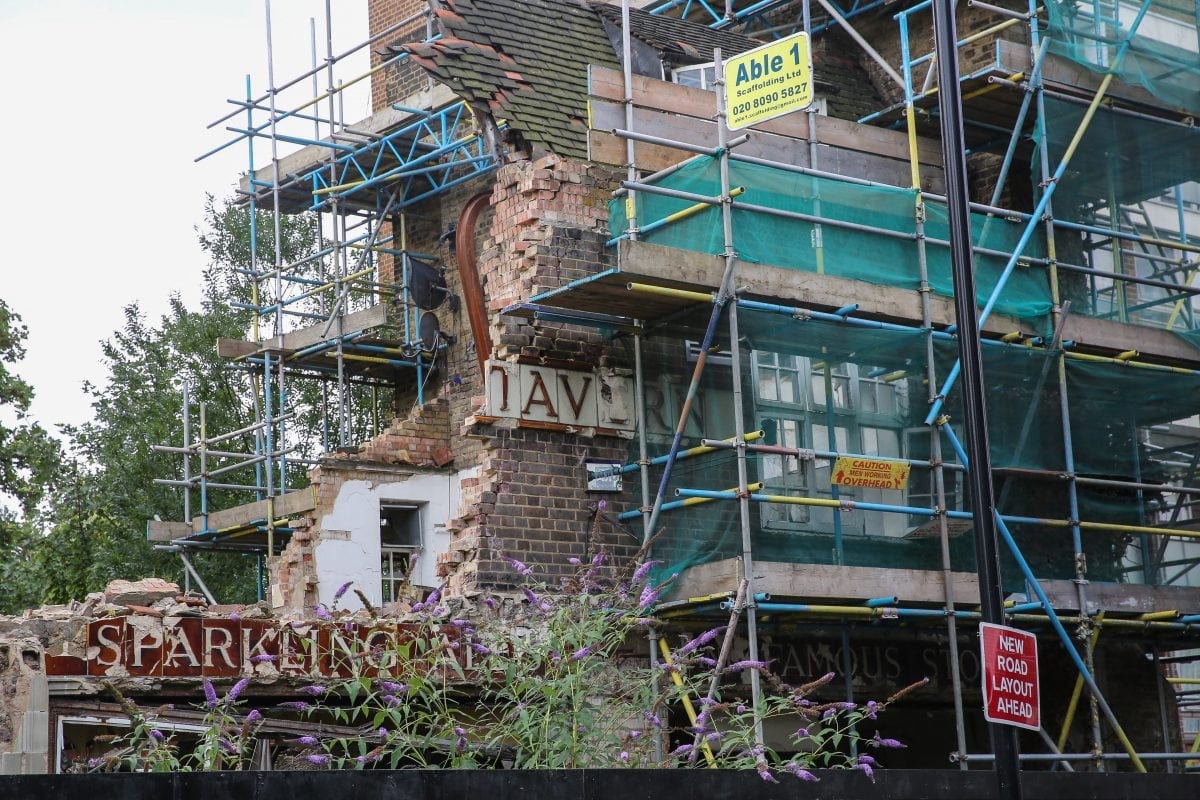 The developers and owners of the pub, CTLX, bulldozed it after an application for planning permission in January 2015 to replace it with a bar and block of ten flats was rejected.

Following the demolition, Westminster City Council made an unprecedented legal decision to hand the Israel-based developers an enforcement notice ordering to rebuild it.

CTLX refused and appealed the decision – but a planning inspector found in favour of the council, following a public inquiry in May 2016 and ruled it was to be rebuilt.

The pub was left surrounded by a tall wooden fence – which was at one point daubed with ‘no right to do this – people before profit’. 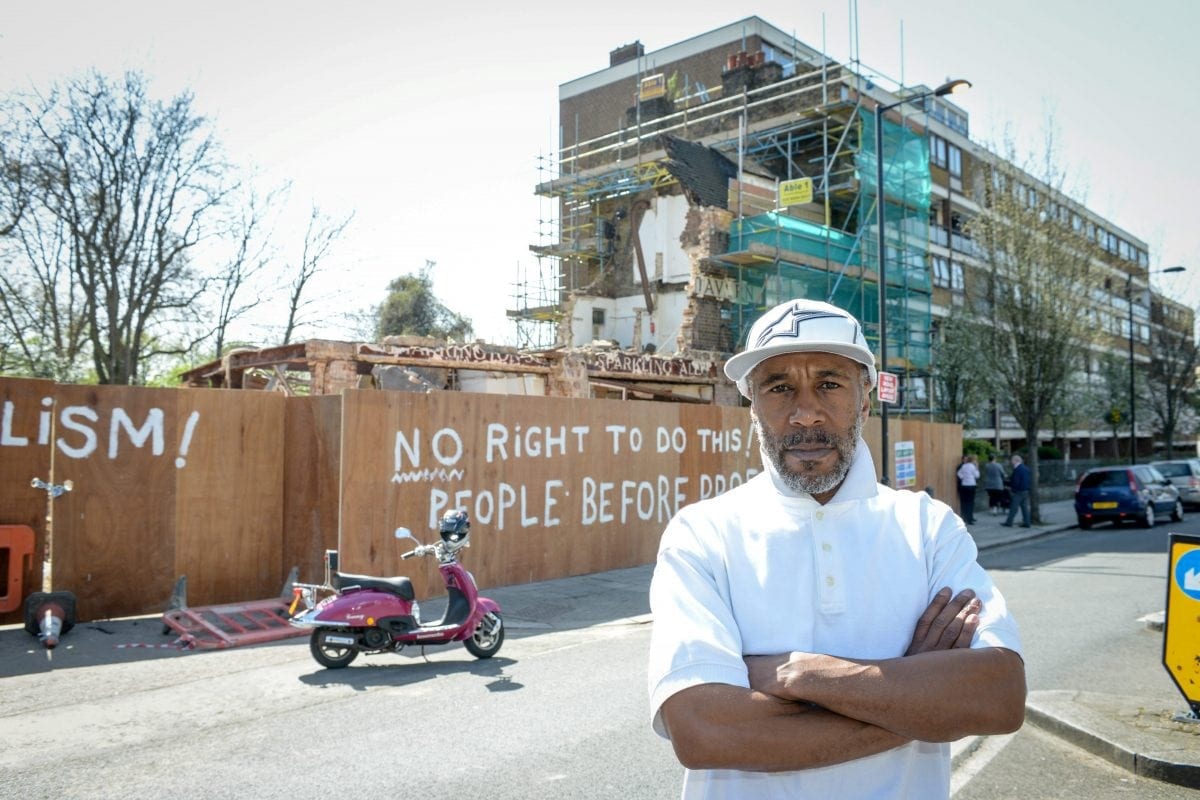 Councillor Richard Beddoe said: “We’re encouraged that construction appears to be under way at the Carlton Tavern site – it has been a long battle to ensure the pub is rebuilt brick by brick.

“However, it is also clear that our enforcement notice, insisting that work was completed within two years, has not been complied with and, as such, we are considering whether any further action should be taken.”

Rebuild the Carlton Tavern, a local campaign group that seeks the immediate rebuilding of the pub, remain unconvinced.

Campaigner Polly Amos-Robertson said: “I have been busy all week with the council to assess the current situation and asked to see plan of works up to build.

“I was advised by our councillors that although the work was supposed to be completed by CTLX, no update was given to the council.

“Permission by CTLX was required for the large banner currently covering the front of the pub – it was not requested of the council.

“Locally we are aware of activities are going on inside, but with no visibility or plan this rebuild remains a mystery.” 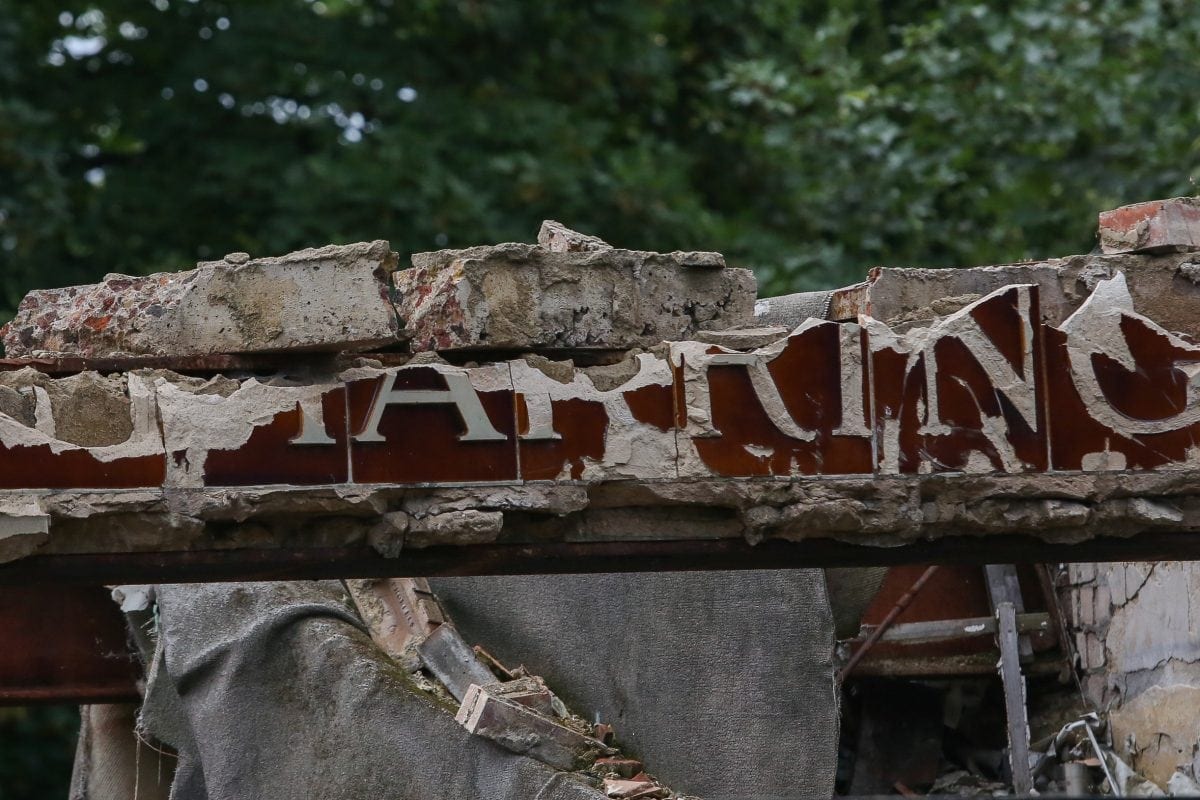 Resident Danny Briottet said: “They’ve got three blokes working in there – must be satisfying minimum requirements or something.

“It will take years to rebuild if it goes on like this, it’s left me wondering what’s happening.”

He said: “The structure when demolished was not Listed or in a conservation area, but the Enforcement notice seeks what is described as a ‘facsimile’ reconstruction.

“The appeal is based on the proposition that such an exercise would be disproportionate and unjustified.”

He said that the developer’s original scheme, which was refused on the grounds of affordable housing contributions, ‘would bring benefits in planning terms’.