Alice Evans is hoping her furniture design project will get people thinking more about we use and throw away. 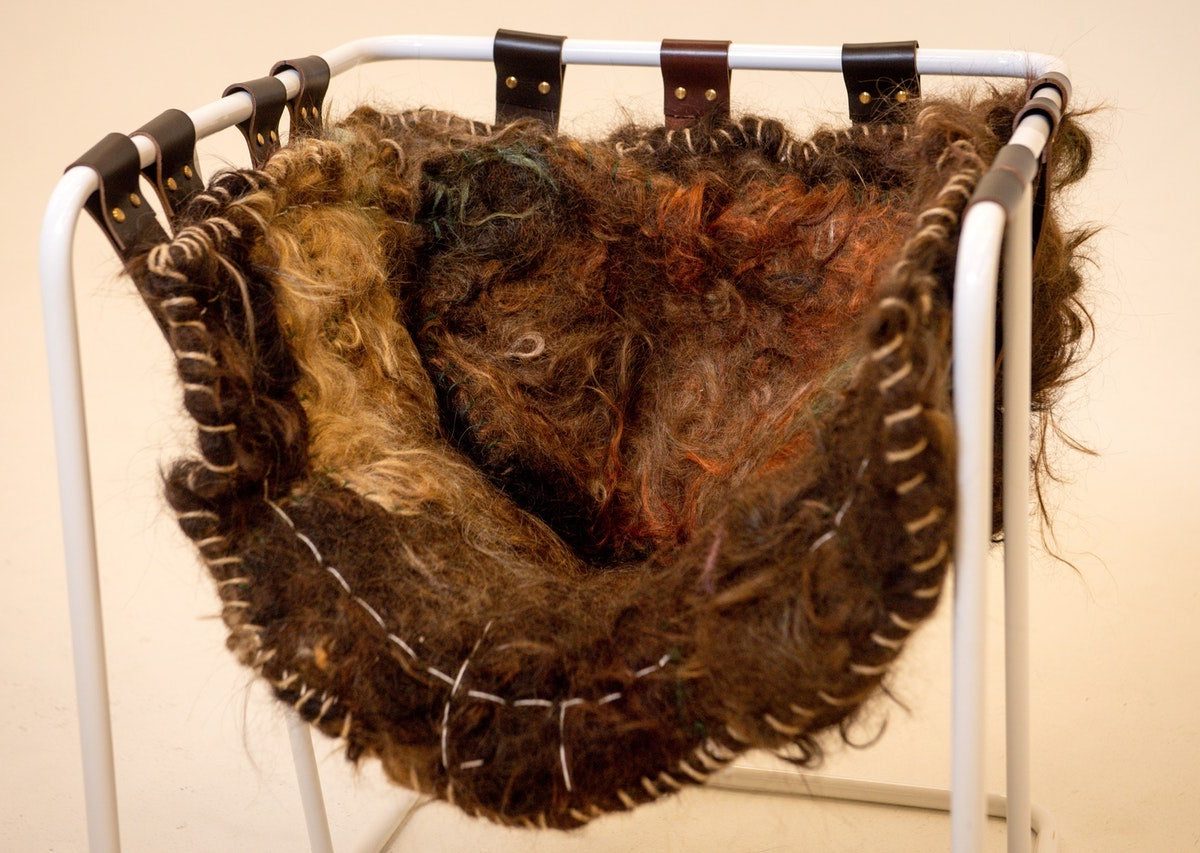 A budding product designer has created a chair from barbers’ off-cuts to get people thinking about what we throw away.

Alice Evans came up with the idea of the Hair Chair while meditating on Buddhist teachings that happiness does not come from material possessions and there should be compassion for all living things.

After completing her dissertation on similar themes in February, she then set about designing and creating the chair, made up of 30 4in (10cm) square patches of human hair stitched together with plant twine.

The hair, collected from five barbers in Birmingham and cleaned with soap and water, forms a bucket seat, supported by leather straps and hangs from a metal frame.

The 23-year-old, who is about to end her final year studying product design at Birmingham City University, said people’s reactions had ranged from “wow” to “disgust”.

She said: “I thought, if it is made from us, what relationship does that create?

“Why do people say ‘Ugh, that’s disgusting’ when it is just part of every single human being?

“It’s just hair and when it is on our head we’re so attached to it, and then, when it’s chopped off, it’s disgusting.

“It’s completely normal to use animal products, so cows’ skin, leather – I am wearing leather shoes.”

She added that reactions have been “a lot more positive” than she expected.

“There’s not that many people who have sat in it – they’ve touched it and some people run away from it still – but it’s fun,” she said.

“Some people are just like ‘Wow, that’s amazing’ and there’s other artists and designers who use human hair as well.

“I think it’s just the conditioning that we’ve got into – so we just think it’s rubbish but it’s a resource that could be used.

“I want to start that conversation as to what things should we be using.”

Explaining why she had chosen to design a chair – having never made one before – Miss Evans said it had evolved from being a symbol of power, such as a monarch’s throne, to an everyday item, used across the world.

As an item which is used by everyone, she felt it was the perfect way to get people thinking about what is waste and what can be re-used, at a time when global awareness about climate change and sustainability is growing.

She said: “It tells a story about how we live our life, and there’s a lot more depth to products, in my opinion.

“That’s why I decided to make a chair from human hair, to try and encourage a closer relationship to the material world, so we waste less and value what is in our world.”

Miss Evans said the chair also contained hair from six of her friends, including one man whose back hair was included “because he wanted to be part of it”.

She added: “I came to the conclusion human hair could be a symbol of all the different people who go into making products.

“Another Buddhist teaching is everything arising upon conditions, everything has a back story to why it’s there.

“So I thought hair tells that story in the best way, because it is literally loads of people.”

She said the only downside is that it was “a bit itchy”, but she does not mind.

“If I would meditate in the chair, I would be more aware of all these people (who have gone into it),” added Miss Evans, from Bromsgrove, Worcestershire.

“It plays on your senses.”

The chair took about two months to make, collecting bags of hair from barbers, twice a week, and with each patch taking half an hour to create.

She has no idea how much hair went into it, because of the different lengths needed.

“The best bits would be a couple of inches long, the longer bits I’d have to chop down,” she said.

“There was quite a lot of short, stubbly bits that I had to sieve through.

“So apologies to my housemates for making the bathroom very hairy for the past two months.”

The finished chair, which Miss Evans has calculated had a cost price of £1,864, is due to be exhibited alongside other graduate design products.

Longer term, she said: “I’m probably just going to take it home and put it with my shrine, in my room, until I know what to do with it.”

The chair has also already been on display at the university’s arts showcase, Inspired Festival.

Meanwhile, Miss Evans plans to go on to work within the sustainable design industry and continue experimenting.