“I am bitterly disappointed by the High Court’s ruling. More than four years on from losing Jodey the DWP has still not had to answer for the role that I believe they played in her death." 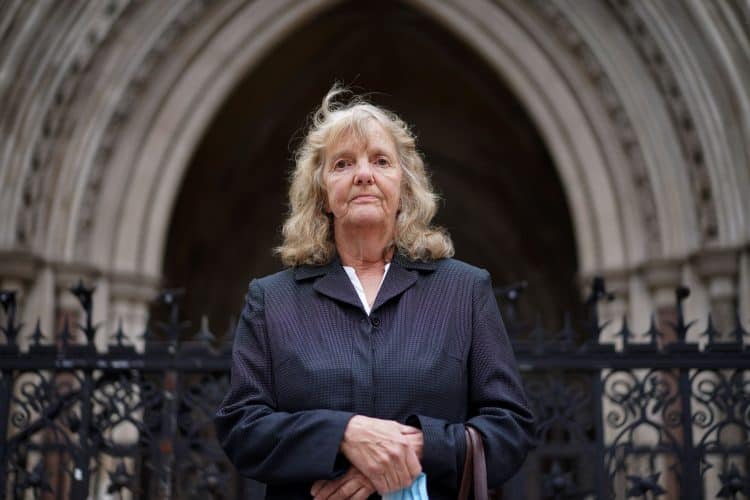 Joy Dove, the mother of housebound disabled woman Jodey Whiting, who killed herself after her benefits were cut, who is to find out whether she has won her High Court bid for a fresh inquest into her daughter’s death (PA)

The mother of a housebound disabled woman who killed herself after her benefits were cut has lost a High Court bid for a fresh inquest into her daughter’s death.

Jodey Whiting, 42, from Stockton-on-Tees, died in February 2017 around two weeks after her disability benefit was stopped when she did not attend a work capability assessment.

Her mother, Joy Dove, asked the High Court in London in June to grant a new inquest to investigate the role of the Department for Work and Pensions (DWP) in Ms Whiting’s death.

The original inquest, which lasted 37 minutes, determined that Ms Whiting had taken her own life.

Ms Dove’s lawyers argued there were “multiple, significant failings” by the DWP when it terminated her daughter’s Employment and Support Allowance (ESA) that were not considered at the previous inquest.

But in a ruling on Friday, Lord Justice Warby, Mrs Justice Farbey and Judge Thomas Teague QC – the chief coroner for England and Wales – dismissed the claim, finding the original inquest was sufficient.

Mrs Justice Farbey said it would not be in the interests of justice for a new inquest, adding: “It is likely to remain a matter of speculation as to whether or not the department’s decision caused Ms Whiting’s suicide.

“In my judgment, it would be extremely difficult for a new inquest to conclude that the department caused Ms Whiting’s death.”

At the hearing earlier this year, the court heard Ms Whiting had received benefits for more than a decade due to serious, long-term physical and mental health issues, including severe pain and a history of self-harm.

In late 2016, the DWP started to reassess Ms Whiting, who said she needed a house visit as she was housebound, had severe anxiety and was unable to walk more than a few steps.

Ms Dove’s lawyers argued that a house visit was not properly considered before the DWP terminated her disability benefit, which led to Ms Whiting’s housing benefit and council tax benefit also being terminated.

The decision to terminate Ms Whiting’s benefit was overturned on March 31, weeks after her death.

The independent case examiner (ICE), the body which investigates complaints about the DWP, later found multiple breaches of department policy, significant errors by staff and several “missed opportunities” for the DWP to reconsider the claim.

Jonathan Hough QC, for the coroner’s service, told the High Court in June that the coroner had called sufficient evidence to address how Ms Whiting died.

“It is unquestionable that the failures of DWP staff were serious and indefensible but that does not mean that the first inquest was inadequate,” he said.

In the judgment, Mrs Justice Farbey agreed and said: “It is not necessary and would not be in the public interest for a coroner to engage in an extensive inquiry into the department’s decision-making.

“The fact that the ICE found numerous significant failings does not mean that an inquest should adduce substantial evidence about them.”

“The inquest conducted by the coroner was short but fair. It covered the legal ground and dealt with the evidence before the coroner including the views of Ms Whiting’s family,” she concluded.

After the decision, Ms Dove said: “I am bitterly disappointed by the High Court’s ruling.

“More than four years on from losing Jodey the DWP has still not had to answer for the role that I believe they played in her death.

“Despite dismissing my application the judgment makes it clear that the behaviour of the DWP has been shocking and I welcome the High Court ruling that Jodey’s ESA should never been withdrawn.

“This is not the end. I am not giving up and I will continue to fight for justice for Jodey. Thank you to all those that have supported me in this fight so far.”