Cull marksmen left the bloodied corpses of three badgers piled up on a footpath for 12 hours – putting dogs at risk of TB, activists claim. The bodies of a family of badgers shot dead during the cull were abandoned beneath a tree, and were said to pose a “biohazard” to the public, if they […] 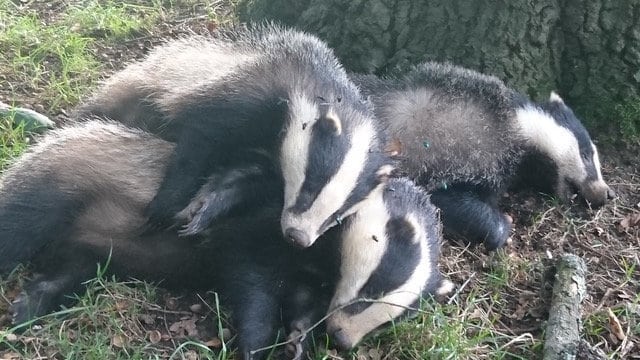 Cull marksmen left the bloodied corpses of three badgers piled up on a footpath for 12 hours – putting dogs at risk of TB, activists claim.

The bodies of a family of badgers shot dead during the cull were abandoned beneath a tree, and were said to pose a “biohazard” to the public, if they were infected.

Tuberculosis is spread through bodily fluids, and the open wounds had attracted hoards of blue bottles could have infected dogs or foxes, protesters said.

Activists claim the bodies were dumped 20ft from a public footpath in Lynam, Wilts, where the badger cull is taking place.

Michael Parkes, spokesman for Wiltshire Against the Badger Cull, described it as “a callous disregard for life.”

He said: “The bodies were quite fresh – the blood hadn’t dried.

“We think they had been shot that morning but they were found at 6pm, so it could have been 12 hours.

“The contractor’s rules are that when they are shot the bodies must be immediately bagged up and disposed of.

“There is a biohazard risk because if they were infected, TB is passed by bodily fluids – but only two per cent of badgers carry it.

“They could have been a very healthy family.”

Mr Parkes said Wiltshire Police have been informed of the discovery.

“Somebody had put them there with the intention of bagging them up, and forgotten about them,” Mr Parkes said.

“We’ve been carrying out patrols looking for wounded badgers and that’s when we spotted a bit of black-and-white fur behind shrubbery.

“It is horrendous, it is a total disregard for life. I’ve not seen anything like it before, none of us have.”