In one extraordinary case a virologist and his family were placed in a safe house when a military sniper went on the run after leaving a note outlining his intentions to target virologists. 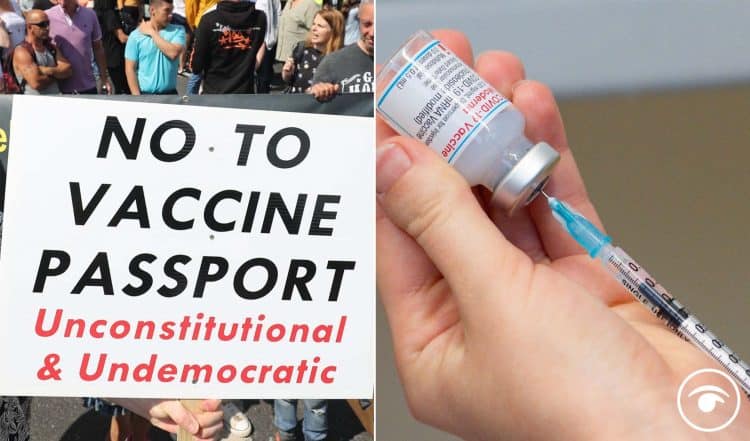 Dozens of scientists have received death threats – or threats of physical or sexual violence – after speaking about Covid, a survey shows.

It comes as television presenter Jeremy Vine has said he was “unnerved” after anti-vaccine protesters targeted his home.

He said in a tweet that the group tried to serve what they called an “anti-vaxx writ” while he was out, instead giving it to his wife.

The BBC and Channel 5 broadcaster said the group was “angry” at the BBC’s reporting on the issue of coronavirus vaccines.

Levels of abuse are much higher than previously feared, the international study found.

One-in-seven have experienced death threats and over a fifth (22%) threats of physical or sexual violence.

More than a quarter said they “always” or “usually” received comments from trolls or personal attacks after commenting on the virus.

Over four-in-ten said it had caused them emotional or psychological distress.

In June, the UK’s chief medical adviser Chris Whitty was grabbed and shoved in the street.

The survey of 321 scientists – 123 (38%) from the UK – found harassment was widespread. Six said they had been physically attacked.

More than two-thirds reported negative experiences as a result of media appearances or social media comments.

Some said their employer had received complaints about them – or their home address had been revealed online.

Anthony Fauci, head of the US National Institute of Allergy and Infectious Diseases, had to be assigned personal security guards after he and his family received death threats.

German virologist Christian Drosten received a parcel with a vial of liquid labelled ‘positive’ and a note telling him to drink it.

In one extraordinary case, Belgian virologist Marc Van Ranst and his family were placed in a safe house when a military sniper went on the run after leaving a note outlining his intentions to target virologists.

Some say they have learnt to cope with harassment, accepting it as an unpleasant but expected side effect of getting information to the public.

And 85% said their experiences of engaging with the media were always or mostly positive, even if they were harassed afterwards.

One wrote: “I think scientists need training for how to engage with the media and also about what to expect from trolls – it’s just a part of digital communication.”

But Nature’s survey suggests even though researchers try to shrug off abuse, it might already have had a chilling effect on scientific communication.

Those who reported higher frequencies of trolling or personal attacks were also most likely to say it had greatly affected their willingness to speak to the media.

That is concerning during a global pandemic which has been accompanied by a battery of disinformation and misinformation.

Fiona Fox, chief executive of the UK Science Media Centre (SMC) in London which collects comments and organises press briefings, said: ” “It’s a great loss if a scientist who was engaging with the media, sharing their expertise, is taken out of a public debate at a time when we’ve never needed them so badly.”

Attacks might have little to do with the science itself and more to do with who’s talking.

Historian Heidi Tworek, of the University of British Columbia in Vancouver, who is studying online abuse of health communicators in the pandemic, said: “If you’re a woman, or a person of colour from a marginalised group, that abuse will probably include abuse of your personal characteristics.”

Two major triggers are vaccines and the anti-parasite drug ivermectin – controversially promoted as a potential Covid treatment without evidence it was effective.

Epidemiologist Dr Gideon Meyerowitz-Katz, of the University of Wollongong in Australia, said: “Any time you write about vaccines – anyone in the vaccine world can tell you the same story – you get vague death threats, or even sometimes more specific death threats and endless hatred.”

Dr Andrew Hill, a pharmacologist at Liverpool University, was besieged with images of hanged people and coffins, after he retracted a study suggesting ivermectin was beneficial over ethical concerns about the data.

Attackers said he would be subject to ‘Nuremberg trials’, and that he and his children would ‘burn in hell’. He has since closed his Twitter account.

Much abuse happens on social media – raising the perpetual question of what responsibility the companies bear.

Almost two thirds (63%) of the scientists used Twitter to comment on aspects of Covid – around a third of whom were “always” or “usually” attacked on the platform.

Commenting on the findings Dr Michael Head, of Southampton University, said: “There’s been a huge amount of abuse aimed at everyone contributing to the pandemic response.

“This has included NHS frontline staff, and also scientists and academics providing thoughts and explanatory comments to the public.

“I myself have received plenty of abuse throughout the pandemic. For those of us who have been pulling apart anti-vaccine misinformation from pre-pandemic times, the presence of these attempts at intimidation is very wearying, but not surprising.

“I would also add an important point – that as a white, male academic, I would imagine I’m far less likely to receive abuse than a scientist making similar points but from a different demographic.

“In my view, the intensity of such harassment has gone up significantly across the pandemic, including becoming more organised and frightening than simply mindless comments on social media.

“Right now in the UK, anti-vaccine activists are also harassing children coming out of school and making threats to teachers and staff carrying out teenage vaccinations.

“This is not an action that was commonly seen in the UK previously, and it worries me that the intimidating anti-vaccine tactics seem commonly in USA and Australia might become embedded here too.

“These groups have become emboldened by the widespread presence of misinformation.

“The misinformation spread around Europe and North America also has far-reaching consequences in terms of inducing vaccine hesitancy further afield.”

Professor Susan Michie, of University College London, said: “The findings of the Nature survey of harassment and abuse of scientists during the pandemic tallies closely with that of myself and many UK women colleagues who have been prominent in speaking to the media.

“The online abuse occurs most intensively after media engagements and especially after those that address restrictions to social mixing, the wearing of facemasks or vaccination.”

Prof Simon Clarke, a microbiologist at Reading University who took part in the survey, said he was “shocked and saddened” by the findings.

He said: “I have had some bad experiences after appearing in the media, particularly after calling out conspiracy theorists and some politicians, who seem to dislike having their pet theories debunked.

“I have on occasion been threatened with various forms of death, violence and lifelong imprisonment.

“I am fortunate to have felt able to ignore the threats I’ve received, but I know that some colleagues have had far worse experiences.

“I suspect that these negative experiences reflect a wider malaise in public discourse in society, fuelled by social media and growing social and political tribalism.”

The survey followed an informal poll by the Australian Science Media Centre (SMC) which found six out of 50 (12%) had received death threats or threats of physical or sexual violence.

Nature’s poll identified a higher proportion of negative experiences among a much larger group from the UK, Germany, Canada, Taiwan, New Zealand, the US and Brazil.

Related: Watch: ‘We know where everbody lives’ – Jeremy Vine’s concerning thread as anti-vaxxers turn up at his home