Protesters brought a busy dual carriageway to a standstill for more than an hour on September 5 while they marched and sang Rule, Britannia! 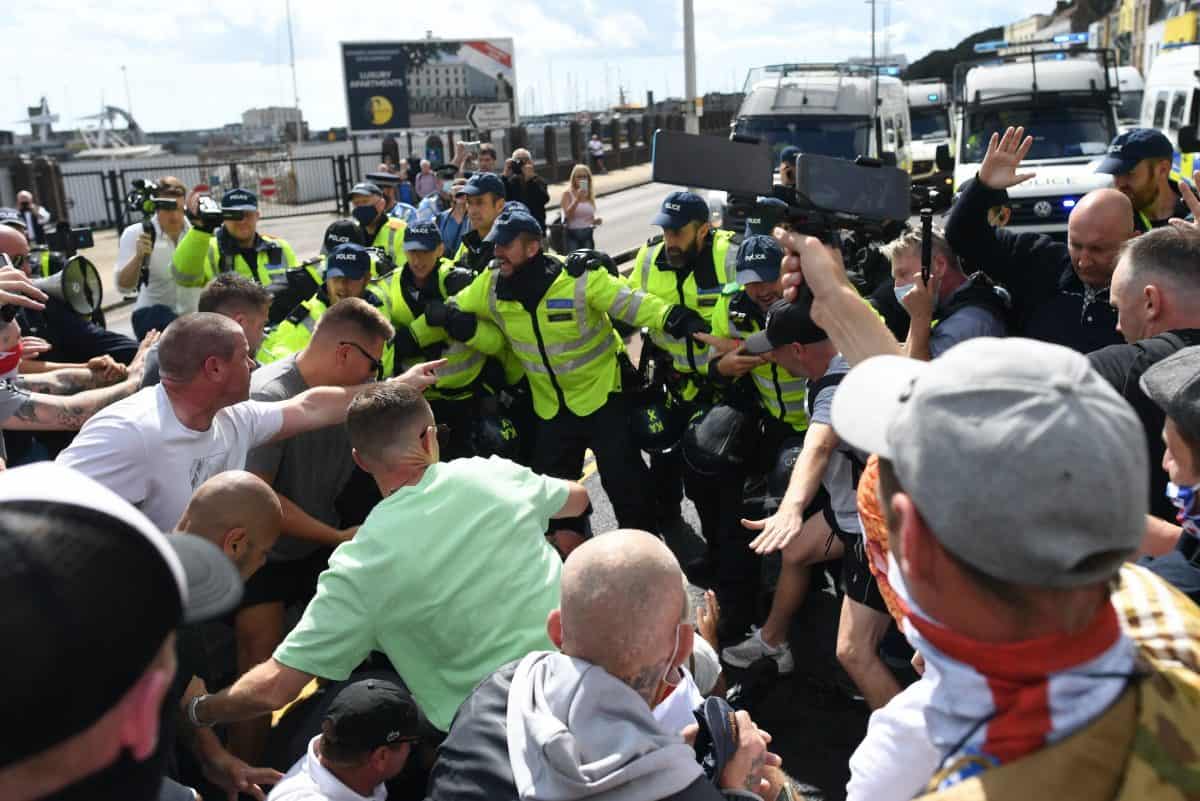 Protests in which anti-migrant demonstrators and police clashed in Dover earlier this year ran up a policing bill of £185,000, the PA news agency can reveal.

Activists brought traffic on a busy dual carriageway to a standstill for more than an hour on September 5 while they marched and sang Rule, Britannia!

Earlier in the day, anti-racism activists had gathered to stand in solidarity with people making the dangerous Channel crossing – despite large gatherings being discouraged amid the coronavirus pandemic.

Kent Police said they understand the depth of feeling of those protesting but urged anyone thinking of organising similar events to “carefully consider the implications”.

Ten people were arrested and several charged over events at the Kent port, which saw a heavy police presence, and after a freedom of information request PA found that the bill for the operation was estimated at £185,000.

A total of 380 officers were drafted in from nine forces amid fears that protests might turn violent, with 152 from Kent Police, while others came from as far away as Norfolk and Suffolk and one was brought in from the West Midlands.

Kent Police declined to comment on the nature of specialist units that were deployed but confirmed that mounted police, roads officers, protester liaison teams and medics were in attendance.

Officers working on the protests logged 1,371 hours of overtime.

Chief Superintendent Nigel Brookes said: “Kent Police had an increased presence in Dover on Saturday 5 September 2020 to minimise disruption to the local communities whilst protests took place in the town and along the seafront.

“Whilst the event was largely peaceful, officers worked with partner agencies, supported by a number of other forces, to keep the disruption on the day to a minimum and reduce the impact of the protest on the busy road network leading into the Port of Dover.

“The majority of people demonstrated their views peacefully, however there was a minority who did not. Thankfully experienced officers were in place and intervened quickly when offences were committed.”

Mr Brookes said officers worked together to keep transport routes moving and to balance the rights of those taking part in the protests.

“We understand the depth of feeling from people who are passionate about the causes they wish to support and as a force it is our role to respond proportionately.

“However, against the backdrop of Covid-19, we continue to urge all those thinking of organising similar events in the future to carefully consider the implications of doing so in the context of social distancing and the latest Government advice and guidelines designed to support the national effort to prevent the spread of the virus and save lives.

“We are determined to keep Kent a safe place in which to live, work and visit and will respond appropriately and proportionately to ensure public safety.”