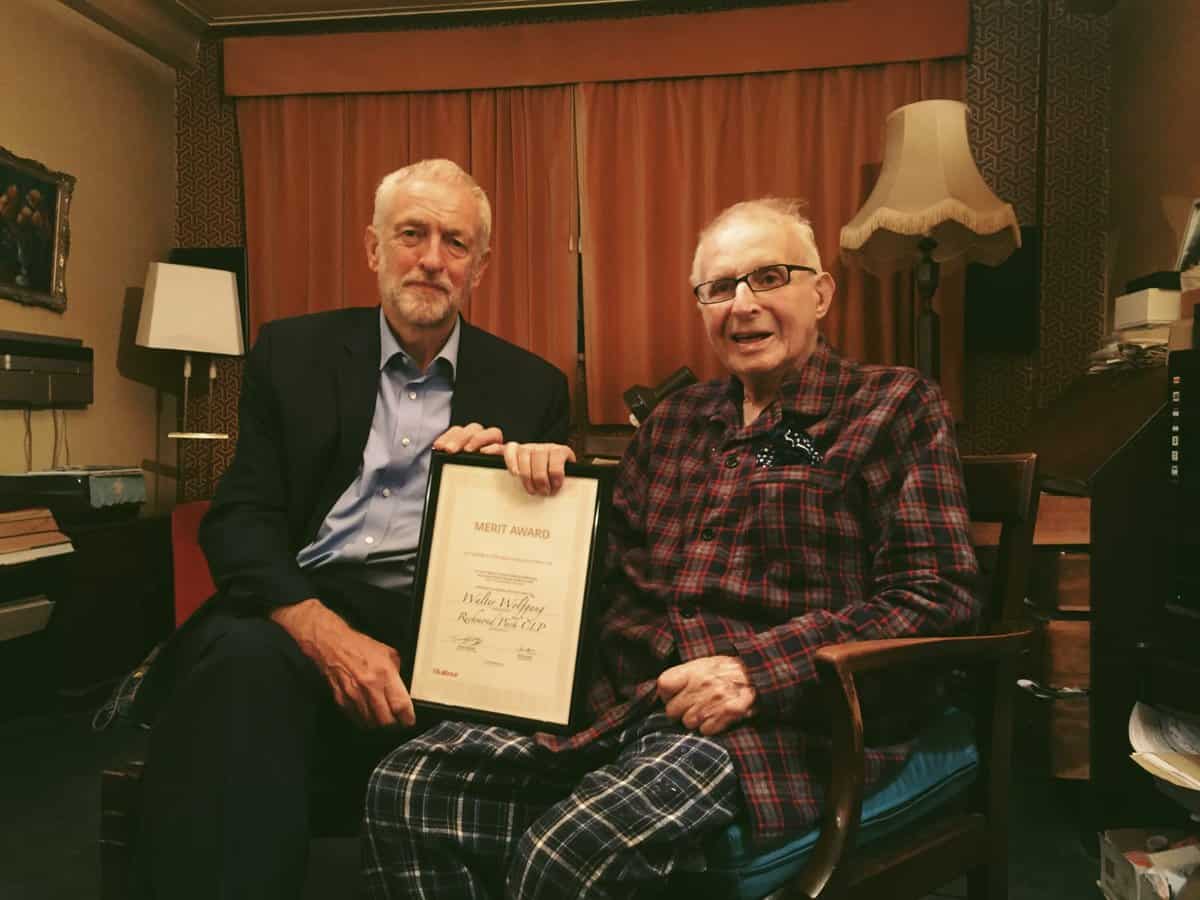 Below is an interview he gave to The London Economic this year, ahead of the No Pasaran conference which he addressed, warning of the rise of the extreme right across Europe.

His parents’ business in Germany was confiscated, and his father was taken to Buchenwald Concentration Camp.

Although his parents escaped Germany, joining him in Britain two years later, they were interned in Britain as aliens, and his father’s health deteriorated before he died in 1945.

Walter said he had witnessed “first-hand the terrible consequences of a political doctrine based on hatred and racism,” and it inspired his life and politics.

Walter was a founder member of the Campaign for Nuclear Disarmament in 1958 and a patron of the Stop the War Coalition.

CND thanked him “for the enormous contribution Walter made to peace and disarmament.”

He was famously ejected from the 2005 Labour Party Conference for heckling then Foreign Secretary, Jack Straw when Straw insisted: “we are in Iraq for one reason only: to help the elected Iraqi government build a secure, democratic and stable nation.”

This week, the Labour Party leader and friend to Walter, Jeremy Corbyn paid tribute. He wrote: “To me, Walter was always a dear friend and a courageous moral leader. I visited him in hospital shortly before he died. He was very ill but his mind was still sharp. I asked him to record a message on my phone. He said: ‘The objective of the Labour party and the peace movement is a peaceful world without exploitation.’”

The Labour Party Leader added that Wolfgang’s experiences had forged within him “a determination to fight prejudice against all peoples and classes. He did not want anybody else, anywhere in the world, to suffer exploitation or oppression, as he and his own family had”.

Corbyn added that Wolfgang’s political beliefs “were underpinned by his Jewish faith – ‘the Jewish aim of human brotherhood’ as he put it – and a desire to make real the Hebrew prophets’ vision of a world without war”.

These are sentiments that echoed an interview the 95-year-old gave us earlier this year, when he was a key note speaker at the ¡No Pasaran! conference – named after the Spanish anti-fascist cry  of the 1930s ‘They shall not pass’ – a European conference in February confronting the biggest rise in the far right and race hate since the 1930s.

Despite his growing deafness, Wolfgang was keen to talk about the dangers he saw facing the world again.

Wolfgang was sharp as ever and determined that the lessons of his past are not forgotten as populists from the far right offering easy solutions, take European countries in a dangerous direction.

“As a refugee from Nazi Germany I saw at first hand the terrible consequences of a political doctrine based on hatred and racism. Millions died as a result of Nazi policies.

“Now we see those hateful doctrines on the rise again. It’s time for those of us who lived through those horrors to raise the alarm, to stop it happening again. We must be united,” explained Walter.

Never one to mince his words, Walter told The London Economic that confronting the rise of the far right again is “more important than ever because racism is on the rise. The President of the United States has just been accused of being a racist by his own lawyer if you read the papers today.

“It is very serious if someone who has racist sympathies is president of a country as powerful as the United States,” warned Walter Wolfgang.

“Racism in any form is highly dangerous and is something people resort to when they do not go into the actual causes of their discontent and people right now are rightly fed up with the effects of neoliberalism on their lives and sometimes that takes a wrong turn,” added Walter.

“Unfortunately, racism isn’t confined to one country or one corner of the world it is found everywhere.

“There have been various reactions against this and it is in this spirit that the conference has been called.  The purpose is to learn about experiences of racism and the fight against racism in other countries.

“The Polish government at the moment is antisemitic. One of the coalition partners in the Austrian government is and it is a very dangerous situation.”

Walter insisted that Britain was still in general the tolerant nation he found it to be arriving as a refugee, aged 14, but he warned against complacency.

“I was treated very well when I arrived as a teenager in the UK,” said Walter.

“Britain has a reputation for tolerance -it’s a great treasure but it is one that must be guarded very carefully.

“We should condemn all forms of racism including antisemitism, islamophobia and other forms of xenophobia and emphasise the brotherhood of every human being and the pursuit of peace.

“There has always been racism in the UK and it comes from the extreme right and those who are Nazi sympathisers.

“Often it has its grounds in dissatisfaction which has taken a wrong turn. People are not looking at the causes of their discontent but looking elsewhere.”

Referring to current accusations of failing to deal with antisemitism in the Labour party that Walter has been a life long member of, he cautioned: “sometimes accusations of racism are used by people against people they don’t like and that weakens the fight against genuine racism.”

Walter insisted that “the Labour party have a good record on tackling racism,” and that Labour Leader Jeremy Corbyn “is one of the most consistent anti-racists in politics internationally and certainly in Britain.”

“Racism is racial prejudice, antagonism and persecution based on ethnicity, faith, race, orientation. It is nothing else.”

Walter added: “Israel is rightly criticised for persecuting Palestinians, I am disgusted with what the Israeli government is doing.

“The mainstream political Zionism of [Israeli PM] Nethanyahu is inconsistent with the Jewish aims of human brotherhood. This is not true of all branches of Zionism and there is certainly resistance in Israel itself, in the United States with the likes of [pro-peace Jewish American group] J Street – who have had a very hard time lately, and in other countries.

“The French have now passed a stupid law which says that attacks against Zionism are antisemitic which is ridiculous.

“And we have to be careful here in the UK too over what has happened to the Labour party.”

The 95-year-old peace activist insisted: “human brotherhood and respect for our neighbours is essential, and it is essential that we extend it to everybody.