A police officer who tasered an elderly race relations adviser in the face will appear before a court accused of assault. PC Claire Boddie, 47, tasered Avon and Somerset Police’s race relations advisor, Judah Adunbi, in an early morning confrontation on January 14. The grandfather was mistaken for a wanted man and refused to give […] 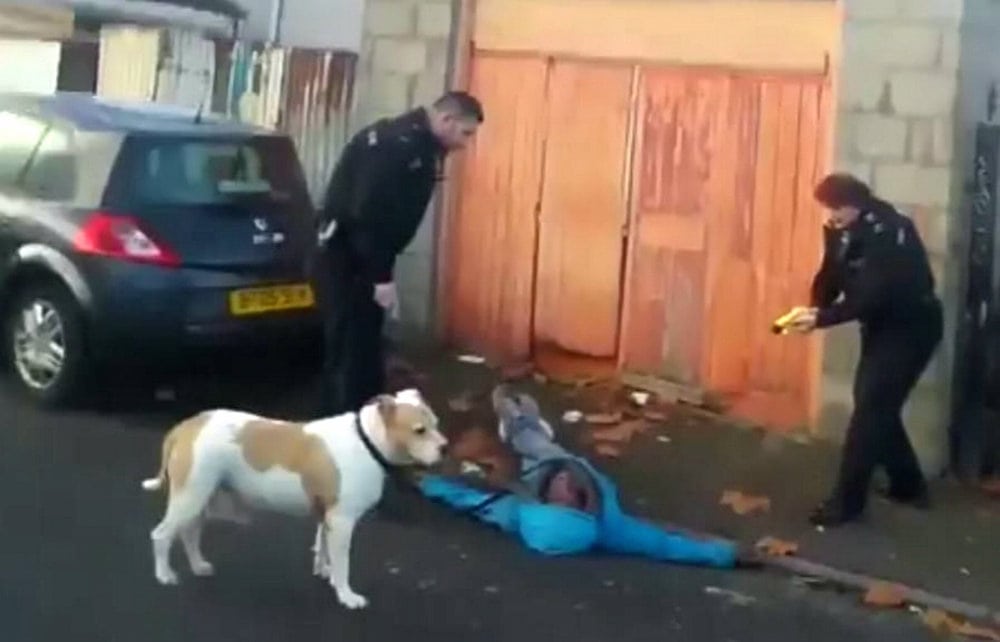 This is the shocking moment Judah Adunbi was tasered in the face by a police officer in Bristol. See SWNS story SWTASER; Bungling police officers tasered their own black Race Relations Advisor in the face - after mistaking him for a wanted man. A stunned passerby filmed the officers confronting 63-year-old Judah Adunbi - who works to smooth relations between police and the black community - and ask for his name. But when the indignant grandfather refuses and tries to enter his home officers shout “Taser” and shoot the electric gun at his face. Mr Adunbi, one of the founders of the Independent Advisory Group set up by the police with the BME community in Bristol, then falls to the ground.

A police officer who tasered an elderly race relations adviser in the face will appear before a court accused of assault.

The grandfather was mistaken for a wanted man and refused to give his name, before he was tasered.

His neighbour filmed an eight-minute video which sparked a ‘Justice for Judah’ campaign in the Easton neighbourhood of Bristol, where it happened.

Initially Mr Adunbi, 63, was arrested on suspicion of assaulting a police officer and charged, but the prosecution was dropped two days later.

After an investigation by the Independent Police Complaints Commission (IPCC) the case was referred to the Crown Prosecution Service to decide whether criminal charges should be pressed against the officer.

PC Boddie has been summonsed to appear before magistrates in Taunton, Somerset, accused of common assault on August 14.

A spokesman for the IPCC said: “An Independent Police Complaints Commission (IPCC) investigation concluded in June and a file of evidence was sent to the Crown Prosecution Service (CPS).

“The CPS decided there was sufficient evidence and it was in the public interest to charge the officer.

“The IPCC began an investigation after the police force voluntarily referred a complaint about the incident, during which a 63-year-old man was Tasered.” A spokesman for Avon and Somerset Police said: “The IPCC has confirmed that one officer will face a criminal charge of assault following an incident involving a 63-year-old man in Bristol in January.

“Now criminal proceedings have started, this prevents us from commenting further on the circumstances surrounding this matter, other than to reiterate that we’re continuing to fully cooperate with the IPCC as their investigation progresses.

“Chief Constable Andy Marsh has made clear from the start of this investigation that we will discuss the matter fully and publicly once the investigation has concluded.”